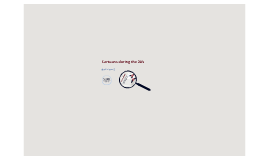 Transcript: Created by Otto Messmer fun character and very popular stared in silent cartoon shorts which eventually gained sound also started in his own comic strips today he is popular through comic strips and shorts Cartoon shorts became extremely popular during the 20's Sound was introduced to cartoons Please enjoy this extremely mini cartoon that I have created Felix the Cat Betty Boop Cartoons during the 20's created by Grim Natwick Although she didn't officially debut till 1930 the cartoon was clearly influenced by the 20's she was the first female flapper cartoon ever before her females in cartoons were portrayed as very childlike has survived till today MICKEY MOUSE Felix the Cat after losing the copyrights his original cartoon Oswald the rabbit to Universal, Disney created Mickey mouse Mickey made his national debut on Nov. 18th 1928 in Steamboat Willie, which became a national sensation Betty Boop by Akshayaa L THE BEGINNING Other Cartoons of the time Oswald the Rabbit Why Mickey was so popular Oswald the Rabbit was Walt Disney's creation, however he was contracted with Universal for distribution purposes and which led to lose of copyright. Oswald was quite popular but popularity dropped once Mickey came out lively and funny mischievous rascal to loveable hero Walt Disney used events during the time in his shorts, for example in Plane crazy 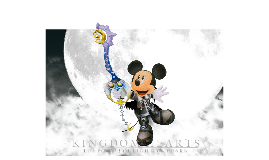 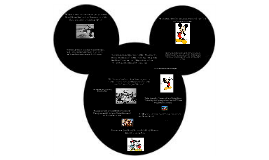 Transcript: Can you tell who this prezi is about just by the ears? Mickey Mouse was "born" on November 18th 1928 when he appeared in "Steamboat Willie". Mickey was immediately a success. Everybody loved him and knew who he was. This famous mouse was created by Walt Disney and Ub Iwerks. He was voiced by Walt from 1928-1947, Jimmy MacDonald from 1947-1977, Wayne Allwine from 1977-2009, and Bret Iwan 2009-present day. You can usually see Mickey with his wife Minny Mouse or maybe with his dog Pluto. Walt Disney had a wife too! His wife was the person that told Walt to name the mouse "Mickey" after she told Walt she didn't like his first pick, "Mortimer". Over time people became to love Mickey more and more. He was the most famous mouse on earth! He was even the first cartoon character to get a star on the Hollywood walk of fame. One of Walt Disney's favorite quotes was "I only hope that we never lose sight of one thing-that it was all started by a mouse". In 1934 Mickey got his own entry in an encyclopedia! Many more episodes of the beloved Mickey Mouse were made. Even a few movies were made. In fact, the first two Mickey Mouse movies only cost $2,500 to make! In 1944 when allied forces invaded Europe the code name was "Mickey Mouse"! Have you ever been to Disney World or Disney Land? Those places wouldn't be there is Mickey Mouse wasn't on that steamboat in 1928. Today the world still knows and loves Mickey Mouse. Kids could probably recognize him from the TV show Mickey Mouse Clubhouse. Sources include wikipedia.org, deccanherald.com, iglu.com, and google images. Thanks for watching! -Sagan Kahler 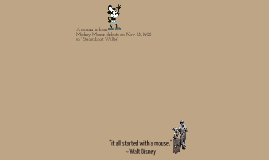 Transcript: "it all started with a mouse." ~ Walt Disney A mouse is born Mickey Mouse debuts on Nov. 18, 1928 in "Steamboat Willie" 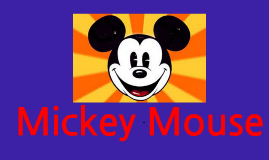 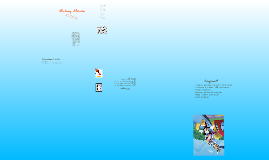 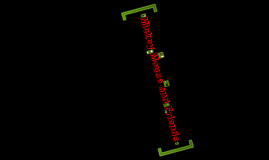 Transcript: ~THE END~ Butch and Pluto In 1934, Encyclopedia Britannica gave Mickey Mouse an entry for his popularity. Minnie Mouse's full name is Minerva Mouse. She is the girlfriend of Mickey Mouse. Her first debut was in Steamboat Willie, the film that made Mickey Mouse famous. She was created for the purpose since Oswald had many love interests, and as his replacement, Mickey Mouse had to be able to flirt as well. Max Goof Young Fred Moore working on one of his animations. A scene from Steamboat Wille Mickey Mouse and Friends Minnie Mouse The famous scene from Steamboat Willie Walt Disney had created Mickey's high-pitched voice using his own. Mickey Mouse's long time rival is Warner Bro's Bugs Bunny. Mickey Mouse and him fought for screen-time in Who Framed Roger Rabbit, and ended up getting the exact same time on screen, right down to the last second. Mr. Duck Steps Out Movie Poster: Daisy Duck's Debut Goofy's debut Daisy Duck Donald Duck Goofy One of the most known animated characters, his fame all started when Walt Disney was to replace Oswald the Lucky Rabbit. He created Mickey Mouse, who debuted in Steamboat Willie. He was originally voiced by Walt Disney. Even after 80 years, Mickey Mouse is still famous, with even his own star in the Hollywood Walk of Fame, and he was also the first cartoon character to do that. Oswald the Lucky Rabbit A scene from The Wise Little Hen Donald Duck is known for his incoherent speech and short temper. His debut was in The Wise Little Hen. His girlfriend is Daisy Duck. He usually wears a sailor suit. It has been known that he is jealous of Mickey Mouse's fame. Daisy Duck is the girlfriend to Donald Duck. She is known to be more sophisticated than Donald. Her debut was in Mr. Duck Steps Out in 1940. She is a good friend of Minnie Mouse. Like Donald, she has a temper as well, but has more self-control. Mickey Mouse Mickey's Own Star Pluto Pluto is a mized breed dog, and is loyal to his owner, Mickey. He first appeared in The Chain Gang. His main nemisis is Butch the Bulldog. Since he cannot talk, his humor relies on his physical actions. His early names were Dippy Dawg, G. G. Geef, and his nickname Goofy. His full name is known as Goofus. D. Dawg. He is best friends with Mickey Mouse and Donald Duck. He is known for his clumsiness and having little knowledge, but is actually very clever in his own way. Goofy's wife is dead, but he has one son, named Max. Movie poster for The Chain Gang Bugs Bunny 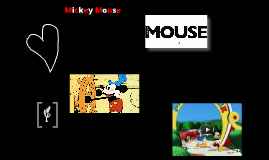