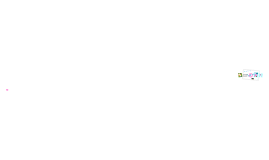 Transcript: Machu Picchu By : George Davis, David Foberg Penis (cc) photo by Metro Centric on Flickr Penis Granja-Farm Budapest Penis San Francisco Temple of The Sun The Temple of The Sun was used to honor and celebrate "Inti" (the sun) which was important in the Incan culture. Roca-Rock Notes Penis Stockholm Tumba-Tomb (cc) photo by jimmyharris on Flickr (cc) photo by Franco Folini on Flickr Double click to crop it if necessary Templo-Temple this place was a religious center for the incans New spanish vocabulary Vocabulary Rastro- Trail THE END Place your own picture behind this frame! Penis (cc) photo by Metro Centric on Flickr priests were the only figures allowed in the temple at the time because the floor was 'sacred'. also the room was fully enclosed to avoid prying eyes during the ritual penis The Temple of The Sun is a 34 foot wide semi-circle of stone built on a solid granite slab 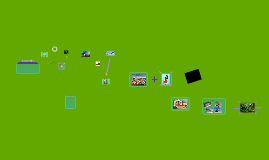 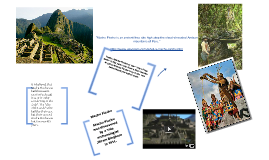 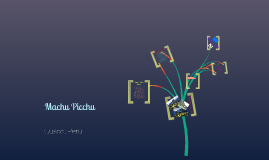 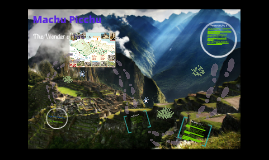 Transcript: Random Facts It is part of the industrial district of the city. Archaeologists argue as to what the Incans did in the area and have not come to a conclusion on its true purpose. Three possibilities are: They weaved, made pottery and created dyes for clothing; they were used to create a fermented drink called "chicha," or they used it for astrological observation. Also known as the Watchman's Hut, the House of the Guardians was placed strategically on high ground, where they could watch for invaders and see a large part of the city. Resources, Pt. II Many people argue over what was the true purpose of the Temple of the Sun. On the day of the winter solstice, the sun shines through the window directly onto the ceremonial stone. It is mainly thought to have been built to honor Inta, an important Incan deity. Machu Picchu is over 500 years old. Hiram Bingham was the one to bring Machu Picchu to international attention in 1911. It is about 8,000 ft. above sea level. It was one of the few places that avoided being plundered by the Spanish. It is one of the New Seven Wonders of the World. Machu Picchu It is the center of the ancient Incan city. From here, Bingham divided Machu Pichu into 4 squares using the Cardinal Directions. The names of the districts have changed throughout the years and, today are named as thus: Initial, Classic, Imperial and Contact/Transition. The names represent the time in which each individual section of the city was built. Resources, Pt. I The Wonder of Peru This form of agriculture helped protect crops from natural disasters. Because of this method of farming, the Incan Empire was one of the most agriculturally productive regions in the world, at the time. And So It Begins... By Luis Remigio Machu Picchu | Royal Inka Hotels & Tours. Royal Inka Hotels & Tours, 2011. Web. 13 Sept. 2012. <http://www.royalinkahotel.pe/attractions/machu-picchu/> The Inca Agricultural Terraces: The "Andinas", Stepped Agricultural Techniques Used in Peru. Rediscover Machu Picchu, 2011. Web. 17 Sept. 2012. <http://www.rediscovermachupicchu.com/agricultural-terraces.htm> Hamre, Bonnie. Temple of the Sun, Machu Picchu. About.com, 2012. Web. 17 Sept. 2012. <http://gosouthamerica.about.com/od/topdestmachupicchu/ig/Machu-Picchu/Temple-of-the-Sun-Machu-Picch.htm> Is one of three edifices that make up the "Sacred Plaza." The three windows, each framing a different mountain, is believed to symbolized the Incan myth of when the Ayar brothers stepped from three caves into the world. Nobility may have stayed within this building when visiting the Sacred Valley. Noon, Anne. Machu Picchu Peru - a visual guide to the lost city of the Incas. Peru Treks, 2010. Web. 18 Sept. 2012. <http://www.machupicchuperu.info/014_machu_picchu_temple_of_three_windows.html> Machu Picchu's Attractions: Huayna Picchu, the Intihuatana, Temples, the Sectors and Districts. Rediscover Machu Picchu, 2011. Web. 18 Sept. 2012. <http://www.rediscovermachupicchu.com/mp-attractions.htm> Machu Picchu Industrial Sector. IncaTrails.org, 2011. Web. 26 Sept 2012. <http://www.incatrails.org/18-machu-picchu-industrial-sector.html> 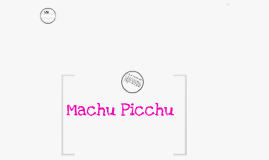 Transcript: Machu Picchu the incas started building the estate around AD 1400 at the hieght of inca empire .The incas then abandoned about a century later in 1572 It was then refamed in 1911 by the american historian Hiram Bingham tourist visit machu picchu because of it beutiful scenery and it's remote location. the historic architectual accomplishments which are way in front of it's time. able to with stand natures most harendess weather conditions. machu picchu is located 2430 metres above the sea level in the middle of a mountian forest Explorors found ruins of temples,palaces,fortresses and a royal tomb .They found remains of the stone aqueducts thsata brought water into the citie from a mile away Machu P icchu was rediscoved on 24th July 1911 by Hiram Bingham announced the discovery to his scolers sustainability The area is quite and can be proved well for the future but in many years people will have over run it and there will not be much left of the amazing area. People will end up over running the area and causing to much pollution in Machu Picchu. The little town has a lot ahead of it especially as it is part of a world hertige site,they are making it more protected by having a limit of 250 people per day allowed on the incas trail to reduce erosion. history : location why do tourist visit ? 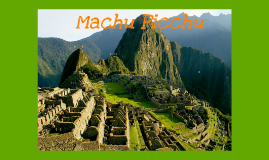 Transcript: Machu Picchu was created around the 1440's by the Inca Emperor of the time. All this was built just with labour force from the members of the Inca tribe. It was created out of perfectly cut stones so that each stone would fit into another, in fact to this day you can't even stick a knife in between the stones of any wall. It is located on the mountain ridge above the Urubamba Valley Machu Picchu The most interesting facts about Machu Picchu would be that for one the precise cutting of the stones with just manual labour and secondly the fact during the winter solstice the sun would fall directly over the Sun Temple that they had. The reason why this was built is still unknown. One theory states that it was a stronghold so they would have an advantage if they ever got invaded. 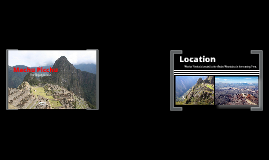 Transcript: By: Kojan Sundin Location Machu Picchu is located in the Andes Mountains in the country Peru. Machu Picchu