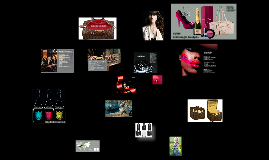 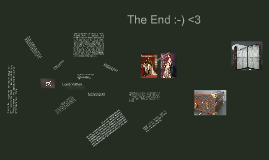 Transcript: Louis Vuitton He was born on the 4th August 1821 in Anchay, Jura, in France. He then died on 27th February 1892. He is best known for founding the large and extremely famous French fashion label, Louis Vuitton in 1854. In 1835, he moved to Paris. It was over 400 kilometres from his hometown to his destination, Paris, and he covered the whole distance on foot. This distance was equivilant to 249 miles. He picked up a few odd jobs during his travel to Paris to Pay for his journey. Once he arrived, he became an apprentice Layetier to wealthy and important families. He built up a very good reputation for himself and because of this Napolean III of France appointed him as layetier to his wife: Empress Eugenie de Montijo After this, he had established a good connection with royalty and an advanced knowledge of the standard of travelling case royalty would expect. After this, he began to make his own luggage to the same standard as for royalty but instead for average people who could still afford it. This set the foundations for LV co. Back at that time, the dresses for the wealthy werre so elaborate they required custom trunks and packers to fit and protect the hoop skirts, corsets and delicate embroidery. He first began manufacturing trunks in 1854 and the company he started became one of the most famous in the world. The louis Vuitton label is most famous for its designer luggage pattern. His became a brand which offered simpler travel pieces. His first travelling trunks became so popular that within a few years, he had already had to expand on his factory. He relocated to Asineresin 1860. The Vuitton line gained international recognition winning a bronze medal in 1867 world's fair and the gold medal in the 1889 world's fair; both of which were held in Paris. When Louis Vuitton died in 1892, his son Georges Vuitton took over the company. The End :-) <3 Napoleon III Empress Eugenie de Montijo

Transcript: Born August 4,1821-February 27,1892 died at age 71 Jura, France-commune of Lavans-sur-Valouse 1835 when he was 14 he moved to Paris on foot over 200 miles and became an apprentice of Monsieur Marechal who worked for the wife of Napoleon III, Empress Eugenie. The skills he learned here would help him start his own business. Since the 19th century, manufacture of Louis Vuitton goods have not changed: Luggage is still made by hand. Contemporary Fashion gives a preview of the creation of the LV trunks: "the craftsmen line up the leather and canvas, tapping in the tiny nails one by one and securing the five-letter solid pick-proof brass locks with an individual handmade key, designed to allow the traveler to have only one key for all of his or her luggage. The woven frames of each trunk are made of 30-year-old poplar that has been allowed to dry for at least four years. Each trunk has a serial number and can take up to 60 hours to make, and a suitcase as many as 15 hours. In 1854 he opened a store in Paris selling high end luggage. His designs were unique, they had flat tops and were able to be stacked so travelling was easier. Everyone elses at the time was rounded and harder to travel with, his line became very desirable. 1885 he opened a store in London, at this time Damier Canvas was being introduced with an L mark on it. A trademark of the sort. 1936, Louis dies and leaves the company to his son Georges, who gained the company exposure. He opened more stores in Europe and the U.S and through exposure at the Chicago world fair, he died in 1936. His son Gaston-Louis took over. The company propelled in 1963 when Audrey Hepburn carried a signature Louis Vuitton bag in the movie Charade. In 1987 Louis Vuitton merged with Moet Hennessey to form LVMH, to form a luxury goods company. Louis Vuitton is currently headed creatively by Marc Jacobs. Under Marc Jacobs direction Steven Sprouse helped to create limited time graffiti bags. LV also collaborated with Kanye West and Takashi Murakami. In 1998 Vuitton entered the world of high fashion. Recent Collection Why Louis Vuitton? My Collection What makes all of my designs cohesive is the hourglass shape, all 5 designs have an hourglass shape. Elements Fabrics used: Pleated Skirt-cotton Shirt-cotton Sweater-spandex Fabrics used: Tights-spandex Shirt-cotton/ polyester blend Fabrics used: dress-cotton/ spandex blend Mostly the only elements used are line, harmony, color and shape. Line is used in the pleated skirt, the seams in all of the outfits. Louis Vuitton store in Houston Manhattan's fifth avenue Double click anywhere & add an idea Boutique in Milan, Italy Louis Vuitton's Resort Collection 2010 Fabrics used: Shorts-jean Shirt-cotton and mesh sleeves Harmony in all of the outfits by making all of the outfits mesh well together. Lastly shape, LV uses a lot of shape to show off an hourglass figure. So most of my outfits show off the hourglass shape. Louis Vuitton trash bag Fabrics used: Capris-bleached jeans Shirt-cotton blend Vest-rayon F.Sol 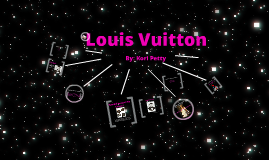 Transcript: By: Kori Petty About Vuitton's Childhood Website Celebrities Fashion scans Editorials Covers Vuitton became a fashion designer by traveling a lot. He first started by developing a bag for traveling such as suit cases and bags and he got better in design and started making clothes. Is Vuitton still alive? Market to people with high income who wants to spend money. Cool facts about Louis Vuitton (: Vuitton's mom passed away when he was 10, soon after that his dad remarried. He had a step mom that he didn't get along with, who made him headstrong and stubborn. And when he was 13 he decided to run away to Paris and that's when his career started. Louis Vuitton Who is their targeted customer? Name - Louis Vuitton Birth date - August 4th 1892 Born - Anchay , France The Basic He trademarked his LV label. Created a pen collection Everything is handmade Hand bags , baggage , shoes , clothes , phone cases , glasses , belts , etc How does LV advertise? Louis Vuitton isn't alive anymore. He passed Feb. 27, 1892. What does he design? There are different kinds of styles like sleek for older and more refined groups. then there's a more funkier style for young people .Kanye West even made a style with Louis Vuitton and its more for a hiphop style What's Vuitton's style ? How did he start his Career ? 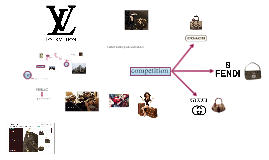 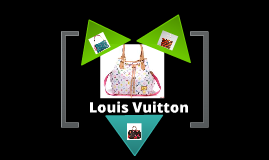 Transcript: About Him He was born on August 4,1821 in Anchay,France. After his mom died when he was ten, his dad then married a wicked lady, so Louis ran away to the capital of Paris at age 13. Later on ...... When he was 16 he was taken in as an apprentice for a box - making and packing comany. It was only a few years to stake out a reputation amongst Paris's fashionable class as one of the city's premier practitioners. After that In 1854, after being married to Clemence- Emilie Parnaux he left Monsienr Marechal's shop to open his own.Vuitton debuted an entirely new trunk. It was made of gray canvas and it was on high demand. But in 1870, his business was interrupted by the outbreak of the Franco- Prussian War. After war, he found his equipment stolen and everything in his shop destroyed. But with his high spirts he kept on going Today... Now, he brand is famous around by world and own by his family. Resoures www.biography.com www.sooo.us www.searchyourbags.com www.handbags163.com Louis Vuitton 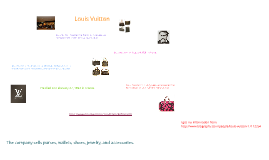 Transcript: Louis Vuitton Louis Vuitton impacted the French culture because he made them known for quality and style. He is important in history because he opened the world of fashion and high-end merchandise. Louis Vuitton's influence is still alive today. He was and still is one of the first and most famous francophone businessmen. Louis was born on August 4, 1821 in Anchay. He died on February 27, 1892 in France. http://www.louisvuitton.com/front/#/dispatch The company sells purses, wallets, shoes, jewelry, and accessories. I got my information from: http://www.biography.com/people/louis-vuitton-17112264