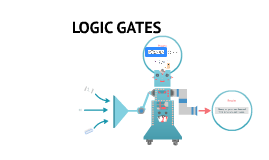 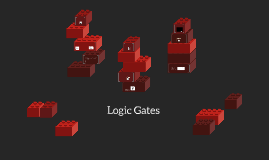 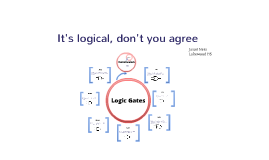 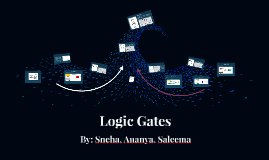 Transcript: Fire Alarm Security system OR Gate Logic Gates The inverse of the AND gate's results is produced. The output can only be high if both the inputs are not high. By: Sneha, Ananya, Saleema Using a Gate Automatic Fan Control Using a Gate NOR Gate Using a Gate Security Alarm Street lights NOT or Inverter Gate NAND Gate The inverse of the OR gate's result is produced. The output can only be high if both the inputs are low. For the output to be high, Input A and Input B must be high. AND Gate Using a Gate Intro A truth table gives the result of all the possible switch settings. It uses two logic numbers: 0 for OFF and 1 for ON. Logic Gates work electronically using tiny transistors as switches. They are made as Integrated Circuits (IC), with each chip holding several gates. The chip needs a DC power supply. Typically, this is a 5 volt supply. Gates can be combined so that the output of one becomes the input of another. For most practical applications, combinations of gates are needed. In this gate, only one input is required. It provides the inverse of the input so if the input A is high, output Q is low. Unless both Input A and Input B are low, the output will always be high. 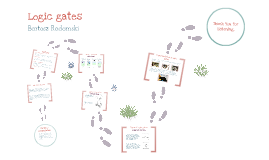 Transcript: XOR gate TTL - transistor-transistor logic - this technology supplanted DTL technology with observation that one transistor can replace two diodes with higher speed and using only half the space CMOS - complementary metal–oxide–semiconductor - to reduce size and power consumption the bipolar transistors have been replaced by complementary field-effect transistors (MOSFETs) AND gate Charles Sanders Peirce Technical classification: NOT gate Thank You for listening. described in a 1886 letter, how logical operations could be carried out by electrical switching circuits History introduced the use of Boolean algebra in the analysis and design of switching circuits in 1937 Nikola Tesla Types of logic gates Logic gates Types of logic gates A logic gate is an idealized or physical device implementing a Boolean function, that is, it performs a logical operation on one or more logic inputs and produces a single logic output. Harvard Mark I - electro-mechanical digital computer built from relays Technical classification: OR gate RTL - resistor-transistor logic - the simplest family of logic gates using bipolar transistors and resistors Implementation of logic gates Walther Bothe Maya II - a computer created from logic gates which has been made out of DNA, it can play a complete game of tic-tac-toe with human opponent Starting in 1898, Nikola Tesla filed for patents of devices containing electro-mechanical logic gate circuits Bartosz Radomski The first modern AND gate was made in 1924 by DTL - diode-transistor logic - resistors from RTL was replaced by diodes for higher speed Parts of presentation Claude Elwood Shannon Logic gates are primarily implemented using diodes or transistors acting as electronic switches, but can also be constructed using electromagnetic relays, fluidic logic, pneumatic logic, optics, molecules, or even mechanical elements. What is a logic gate Logic classification: Types of logic gates What is a logic gate History of logic gates Types of logic gates Implementation of logic gates 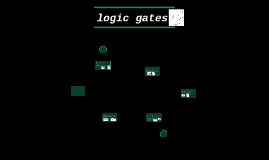 Transcript: NAND * This gate is equal to the DNA but is denial. * This consists of an AND gate with a NOT gate (denying) the exit. * With that you get a "0" when all inputs are "1" and "1" when all its inputs are "0". * The circle at its output is symbolizing the denial, reverse all your outputs "1". * This gate is one of the most basic. * Is your boolean function is multiplication and serial connection is made. * Its truth table shows each time one of its inputs is a "0" your output will be "0" (low), so its two inputs must be "1" so its output is "1" (High ). B GATE NOR logic gates symbol A AND GATE OR A A * Basic gate, his Boolean function is the sum, runs parallel connection. * His condition is "1" every time one or both inputs is set to "1". A Symbol NOT GATE NOT GATE AND * This basic gate allows its output is opposite its entrance. * Boolean function characterized by denial, only has one input and one output. OR Thanks for your attention that are? Symbol B Symbol They are electronic devices with a Boolean function. NOR A x B GATE NAND * The NOR gate is the denial of a further OR gate NOT (reverse) gate. Ie if its output is '1' to be denied his departure should become '0'. This is why it is called the inverter gate There are different types of gates: A + B Symbol 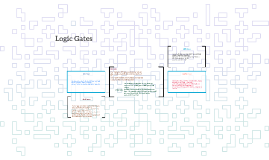 Transcript: LOGIC GATES Logic gates are the basic building blocks of all digital circuits and systems. We are not going to be concerned with the physical electronic properties, instead we are only looking at their behaviour