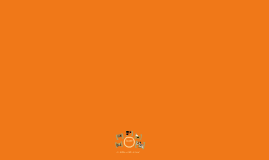 Transcript: of Africa! Lions can run up to 50 miles an hour and we can only run up to 11 miles an hour! That's 39 miles an hour faster than us. cute!!! A lion crossed with a tiger is called a liger. Ligers are the world's biggest cats with the strength of a lion and speed of a tiger combined. Lions live in a group called a Pride which has only one male lion in charge Lions cubs play a lot. This helps them practice and learn about hunting which they need to do when they are grownup A lion's roar can be heard up to 5 miles away. That would be all the way from School to Haxby Town LIONS BY JOSEPH GABRIEL WILLIAMS 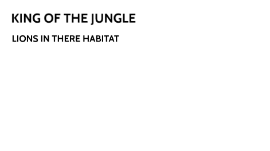 Transcript: KING OF THE JUNGLE LIONS IN THERE HABITAT where they live THE LIONS DEN STAY AWAY! dark smelly loud food lions food the food of a leader antelopes zebras dingos Topic 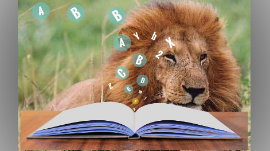 Transcript: 1 m 2 p b Y g X F By Thomas Aoudi H15 Lion E The common name of the lion is the African Lion. Common Name and Classifications of the Lion Classifications of the Lion Kingdom- Animalia ( Animal) Phylum- Chordata ( Vertebrates) Class - Mammalia ( Mammals) Order - Carnivora ( Carnivores) Family - Felidae ( Cats) Genus - Panthera Species - Leo The scientific name for the African Lion is Panthera Leo. D Four Physical Charasteristics for the African Lion C Four Charasteristics of the Lion are that they are well built, they are very strong and are built to hunt and find other animals. The African Lion also has very big teeth in order to bite snd eat big chunks of food such as meat. One more Charasteristic of the lion is that a male lion has a mane while a female lion does not. The mane is to protect the lion's neck during a fight. It also makes them look bigger and frightening to other animals. B The Lion's Natural Habitat The African's Lions natural habitat is around the cenrtal of Africa and South Sudan. Around these areas there areas there is scrub, grasslands or open woodlands. This is the lions favourite place to stay and most of the African Lions live around Central Africa. A The African Lion's Diet The Africn's Lions natural diet consists of large animals that they find. These animals can be zebras, antelopes, wildebeest, buffalos and goats. These animals are animals that the lion finds in the grasslands. If the Lion does not find any of these animals then they wiil then eat smaller animals. B The Lion and the Cheetah have a really close relationship and this is why. In a food chain the lion and cheetah are both really high in the food chain and the lion is on the top of the food chain as well. The lion also eats the same kind of food like the cheetah and they both are well built and very strong. The Relationship between the Lion and Cheetah! B The binomial name of the lion is Panthera Leo. Also the binomial name of the Cheetah is Acinonyx Jubatus. Binomial Name of the Lion and Cheetah Thank You A 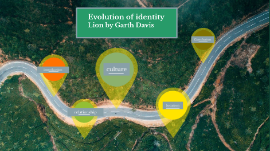 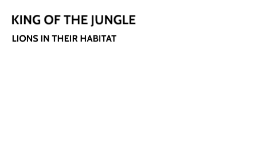 Transcript: KING OF THE JUNGLE LIONS IN THEIR HABITAT Where They Live THE LIONS DEN STAY AWAY! dark smelly loud Food A LION'S MEAL THEY EAT A LOT! antelope zebras dingos Topic 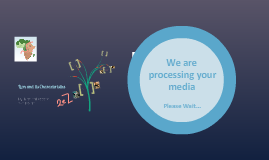 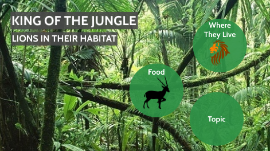 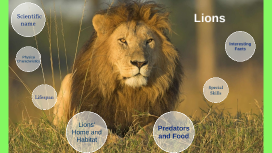 Transcript: Lions What does the scientific name mean The scientific name for the lion is panthera leo and the meaning of the name is "lion of God" Scientific name Four Physical Characteristics Lions are symbols of strength and courage. Their fur is yellow-gold, which helps them camouflage in grasslands. Lions have incredibly strong bodies and powerful forelegs, teeth and jaws for pulling down and killing prey. The lion is an incredible animal that is feared by many in Africa where they commonly attack sheep and other farm animals. Adult males are normally bigger and have shaggy manes. Physical Characteristics How old can it become? Females live longer than males, averaging 15 to 16 years old compared to 10 years old for males. Males reach their prime between 5-9 years. Lifespan Lions Habitat Lions live in several parts of Africa including: Angola, Botswana, Mozambique, Tanzania, the Central African Republic, South Sudan and other parts of sub-Saharan Africa. Habitats include grasslands, the African savannahs and sometimes even deserts! Lions' Home and Habitat Predators and Diet of a Lion Predators and Food The most common prey are zebras, giraffes, pigs, cape buffalo, antelope and wildebeests. A single lion kills about 15 large animals each year, filling out its diet with carrion, as well as kills made by other members of the pride. Cubs are vulnerable to predators like hyenas, leopards, and black-backed jackals. What can it do well? Lions can derive water from plants (ex: Tsamma melon) Lions can run fast: top speed 50 mph Lions can roar very loudly. A lions' roar can be heard over several miles. They use their roar to communicate and declare territory. Special Skills < than 35,000 wild African lions Females are the pride's primary hunters A pride's territory can extend to 100 sq. miles Lions sleep or rest about 20 hours a day. Interesting Facts