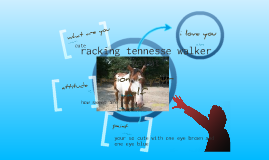 Transcript: what are you cuteo lovable your so cute with one eye brown and one eye blue is important i love you racking tennesse walker paint attitude zoom in, and add details to these Frames color/patern pasion in your self paint is here how sweet are you cute 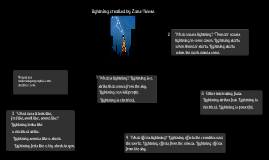 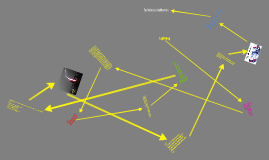 Transcript: Lightning FACT: One bolt of lightning can be 100 million volts of electricity! Lightning is an electric current. In side a thundercloud high up in the sky, many small bits of ice bump into each other as they move around in the air. All of the collisions create an electric charge. After a while the whole cloud fills up with electric charges. The positive charges collect at the top of the cloud and the negative charges collect at the bottom of the cloud. Since opposites attract each other this causes a positive charge to build up on the ground beneath the cloud. The ground's electrical charge concentrates around things that stick up like mountains, people and trees. The charge coming up from these points eventually connects with a charge reaching down from the clouds and, ZAP, lightning strikes. FACT: Lightning is six times hotter than the sun! The thunder we hear is caused by the lightning. The lightning makes a hole in the air, which is called a channel. As the air rushes to fill the channel it creates a sound wave which we hear as thunder. FACT: Light travels faster than sound which is why you hear thunder after you see lightning. Lightning can cause damage to things on the earth's surface, such as trees and telegraph poles. Advice if you are in a thunder storm! 1. Don't put up an umbrella! 2. Don't stand under a tree! 3. Try to get into a building or a car! FACT: To be able to tell how far away a thunder storm is count the number of seconds between seeing the flash and hearing the thunder and divide by five! Thunder storms do not occur evenly over the earth. They tend to happen most in hot, humid countries such as Kenya. FACT: Around the world there are 40 lightning flashes per second! By Rebecca Ketteman 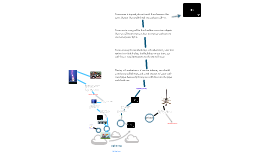 Transcript: Lightning This is how lightning works, in the clouds, there are electric charges, on a normal sunny day the positive and negative charges are evenly divided but during a thunderstorm the positive and negative charges are spread out differently. The positive and negative charges are made up of ice crystals and hailstone. Ice crystals being the positive and hailstone being negative. Icy crystals are up drafted and pushed towards the thunderstorm but at the same time the hailstone is down drafted towards the earth's surface. This is just like a battery where you have a positive end and a negative end. Cause of Lightning What causes Lightning? Lightning is caused by thunderstorms when liquid such as ice particles above freezing level bump into each other it will build up in an electrical field and once the electrical field is large enough a spark will go off. In these lightning strikes, the temperatures are a range of 30,000 to 50,000 degrees F, which is hotter than the surface of the sun. What causes thunder? A lightning channel full of energy will heat the air to 18,000 Fahrenheit, causing the air to quickly expand, creating a sound wave known as thunder. The initial tearing sound is caused by the stepped leader, and the sharp click that is heard at a very close range is caused by the ground streamer, which is just before the main sound of thunder. Thunder can be heard up to 25 miles away from the lightning discharge. Where Does Lightning Strike? Lightning usually strikes on tall objects such as trees and skyscrapers are commonly struck by lightning. Mountains can also make good targets. The reason for this is their tops are close to the base of the storm cloud. Lightning does not always hit tall objects because it just depends on where the charges build up. Lightning can strike the ground in an open field. Lightning affects people in many ways, loss of houses, friend, family, and etc. Lightning affects many people around the world and 74% get hit by lightning. The true impact of lightning on nature and culture is hidden by the widely isolated nature of lightning itself. Forest fires are possibly the most spectacular events caused by lightning. Positive charges are a major reason in forest fires since they tend to be strong and separated from rain-bearing parts of a storm. How Earth affected by lightning? The earth benefits from lightning in several ways, lightning helps the earth maintain electrical balance, the earth is recharged by thunderstorms. The earth's surface and atmosphere carry out electricity easily. Thunderstorms will help transfer the negative charges back to earth and since lightning is normally negative. Without thunderstorms and lightning, the earth's atmosphere electrical balance will disappear in five minutes. Also the Ozone produces chemicals when lightning happens. Lightning Safety During a thunderstorm: if you are indoors, you should avoid using cell phones, and avoid sources of water with metal pipes because lightning can still flow into the pipes and shock you. If you are caught outside during a thunderstorm, your first option is to find shelter, find buildings or get into a car with heavy metal protection on the top of the car. If you are in a car, pull to the shoulder away from objects that may fall onto your car. Stay in your car and turn on your emergency lights. If someone is injured, do not touch them because they carry charges that could shock you and just call 911. Lightning Rods: Lightning rods are invented by Ben Franklin; neither attracts nor repeals lightning bolts, Lightning rods provide a safe path to the ground for the flash. EXPERIMENTING TIME!!!!!!!!!!!!!!! Section 1: Origin/Formation/Cause By: Bon Tran Section 2: Affects on People Lightning is simply a massive spark of static electricity, which is the same kind of electricity when you touch a doorknob and it shocks you. Forecaster can do a forecast on the probability of intense lightning activity. It is impossible to forecast individual strikes since lightning is so widespread, frequent and random. Introduction Section 3: Influence in Technology 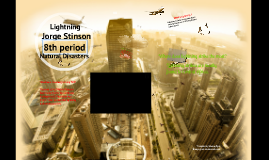 Transcript: Where does lightning strike the most? What have i learned from my ND? I learned of my Natural Disaster that it is harmful to the Earth and is dangerous if it has happened to you. I also learned that lightning is electricity as a bolt. Jorge Stinson Lightning strikes are mostly found to Central Africa. llll How does lightning occur ? Natural Disasters What is lightning ? Lightning 8th period Lightning is a bolt of electricity that is made by a build up of differing charges with in clouds. Template by Missing Link Images from Shutterstock.com Lightning occurs when clouds are composed of millions of ice particles and water droplets.These particles collide with other condensing moisture as it goes up when they do electrons are knocked loose with a negatively charge and makes lightning. 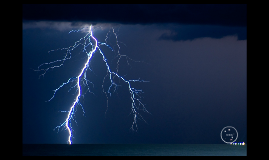 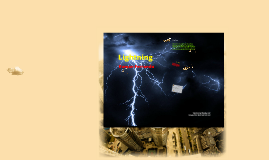 Transcript: Lightning is a huge Discharge of electrical energy created by friction. It is also very dangerous it is one of the leading weather related causes of death and injury. The friction is mainly caused by air currents or jet streams that are from different areas and only when one is warm and the other not. Lightning is cool But is also dangerous so never play with it just like fire. it is very interesting to me. Lightning is very useful and has been for things like helping discover electricity and many inventions to come with electricity. Lightning Lightning Lightning Cont. Template by Missing Link Images from Shutterstock.com Did you know that rubber shoes do nothing to protect you from lightning? That talking on the telephone is the leading cause of lightning injuries inside the home? That standing under a tall tree is one of the most dangerous places to take shelter? Fast Facts Roman Ferrando