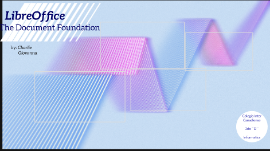 Transcript: by: Charlie Giovanna LibreOffice The Document Foundation Colegio Inter Canadiense 2do ´´D´´ Informatics What is LibreOffice? LibreOffice Available for everyone Works on : -Microsoft Windows -mac OS X -Linux Available in 114 languages It is a Free and Open Source Software created by a large group of Free Software advocates . Programmed in: -C++ -Java -Pythom It doesn´t come packed with an email client LibreOffice Apps Apps Writer Writer -Word Processing Software -Fantastic grammar checker - Autosave system -Supports a huge variety of formats Calc Calc Spreadsheets Software -It has its own macro language -It is not always compatible with Excel´s VBA Format Draw Draw Vector graphics and flowcharts Impress Impress Presentation´s Software -Struggles when importing presentations made in PowerPoint -Missing fonts -Lack of certain animations -Doesn´t support video exports -Doesn´t have animated diagrams -It can export presentations in different formats Base Base Database Math Math Formula editing When was it created? LibreOffice -It was released on September 28, 2010 by a charitable foundation, The Document Foundation, under German laws. -The first stable version was released on January 25, 2011. -This Software gets updated often. What can you do with this software? LibreOffice You can create: Marketing presentations Technical drawings Financial reports Brochures Letters Master thesis References References https://ww.libreoffice.org/discover/libreoffice https://www.computerhope.com/jargon/l/libreoff.htm https://es.m.wikipedia.org/wiki/LibreOffice https://www.google.com.mx/amp/s/lifehacker.com/battle-of-the-office-suites-microsoft-office-and-libre-1147940828 https://documentfoundation.org 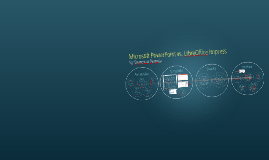 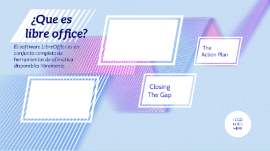 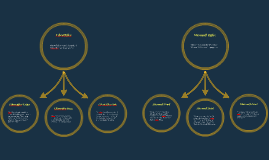 Transcript: This will show you the benefits of LibreOffice and its programs. Libre Draw is a lot better than Microsoft Paint, because you have way better options to make awesome billboard or pictures. LibraOffice Microsoft Excel Microsoft Paint LibreOffice Calc Microsoft Office This program is very useful for making letters but i wouldn't recommend it over Libre Writer. It has a lot of useful tools but not as many as Libre Writer. I would prefer this program over Libre Calc, because it has a lot more useful tools and it quicker and easier to use. This program has a lot of useful options but I would prefer Libre Draw. You can edit pictures and draw your own pictures on Paint. There are lots of cool things to do. Libre Writer is just as useful as Microsoft Word but is way easier to use in my opinion. There are so many there are lots of fonts and options to make your papers the best they can be. This will show you the benefits of Microsoft Office and its programs. Microsoft Word Libre Calc is a different version of Microsoft Excel. It doesn't have all the same options as excel. I would use excel over calc, because it is better for quick and easy use. LibreOffice Writer LibreOffice Draw 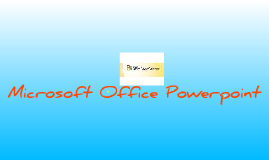 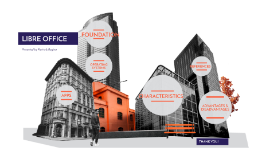 Transcript: Presented by Kevin & Regina THANK YOU! LIBRE OFFICE APPS Writer Calc. Impress Draw Math Base FOUNDATION IT WAS FOUNDED... From OpenOffice.org in 2010, which was an open-sourced version of the earlier StarOffice. It is available in 110 languages. PROBLEMS 01. 02. 03. It continues to build on the foundation of the dedicated work by the OpenOffice.org Community OPERATING SYSTEMS OPERATING SYSTEMS Microsoft Windows Linux MacOs Android CHARACTERISTICS Here we have the best 7 characteristics... A Style-based Orientation Precision Settings The Navigator Outline Levels Templates Editable Tables of Contents (TOCs) Page Styles The Superiority of Styles Writer tricks 3 tricks " " " Use the Thesaurus highlight the word you need help with and then hit Ctrl + F7 and Thesaurus will open with suggestions for the word. Take advantage of autocomplete Click Tools Autocorrect Options. In the Word Completion tab, make sure the Enable Word Completion option is checked. In that same tab, make sure the check box for Collect Words is selected. Create instant hyperlinks Use the Hyperlink Bar. To enable this, click View Toolbars and select Hyperlink Bar. REFERENCES REFERENCES OFFICE https://www.techwalla.com/articles/what-are-the-advantages-and-disadvantages-of-open-office https://es.libreoffice.org/ https://www.documentfoundation.org/ https://es.wikipedia.org/wiki/LibreOffice https://es.libreoffice.org/descubre/writer/ https://help.libreoffice.org/Writer/Writer_Features/es ADVANTAGES & DISADVANTAGES It is free. It is cross-platform in that it is written in Java, so it will run on any platform. It will save PDFs without hassle. It is a bit slower, and uses up a lot of memory, because Java. It doesn't come with technical support as part of whatever package you buy. It doesn't handle MS' propietary formats or indeed their fake "open" formats (which can contain binary information which isn't in the spec). ADVANTAGES & DISADVANTAGES 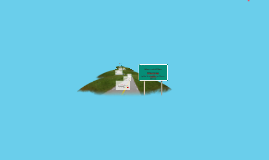 Transcript: A presentation is an informative speech that usually includes visuals, such as slides. A powerpoint presentation consists of slides that are organized and formatted using Microsoft Powerpoint 2010. Normal view displays the current slide in the slides pane, and is best for editing the text and graphics on a slide. The slide master is the template that applies to all slides in the presentation. To get to the slide master go to the view tab and click slide master. A presentation is an informative speech that usually includes visuals, such as slides. You can change the way the background looks in the slide master tab. To change it you go to slide master and click background styles. You can insert graphics into a PowerPoint presentation. To insert a graphic you go to insert then click picture or clip art. You can also insert shapes, video, and audio. Slide Show view displays the presentation as it will appear to the audience. By Matthew Buffaloe and Hunter Johnson Graphics Themes are accessible in Access, Word, Excel, and PowerPoint, so that documents created in all three applications can have the same theme and look like part of a professional document package Notes Normal View Slide Master Slide Sorter view is useful for selecting multiple slides and changing the order of slides. Slide show view Notes Page view is used to add and format notes, add graphics to the notes, and format the layout of the notes page. The Notes Master is used to change the layout and look of printed speaker notes. GOAL! Charts Themes A theme is a named set of formats that change the colors, fonts, backgrounds, and layout of placeholders Microsoft Office Powerpoint Presentation Slide Sorter View Background Charts are used to illustrate numerical data, which can help the audience visualize patterns, relationships, or trends in data. To insert a chart you go to the location of the chart and hit copy and then you go to where you are going paste it and hit paste.