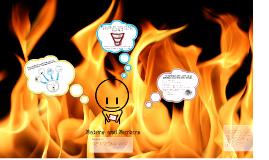 Transcript: The connection the parent's make with the child can have a major influence on the child's actions -family functioning (broken homes, mother and father figures, no essential role in the family; then they tend to stray away) -Affect the decisions they make -change their attitudes towards certain things, -behavior and habits -Teens often look for the approval from their peers -Teens are vulnerable to adapting values, good or bad, from their peers. -Depending on how important a person is to the individual, they can drastically change their out look on things - "Bless Me Ultima" - "Always Running" Nervous System -John Locke's idea of tabula rasa states that an individual's knowledge comes from their own experience and perception. - In Buddhism there is a concept known as reincarnation; it is the idea that after death a person is reborn and their actions are based on their moral quality from their past life/lives. The influence peers have on an individual can affect them directly. Poverty is always single-handedly blamed for the actions of juvenile delinquents. There is concrete evidence that backs up the idea that juvenile behavior is the result of the genetic imbalance and the social disconnection they have with their parents and peers. How a person is born and raised is a critical component that builds character, and depending on these things it can either push or pull a person into a life of crime. -The unbalanced biochemistry [caused by the release of hormones in the brain] in a teen can affect their emotions; which can make them act irrationally and impulsively. -There are things that occur in life that can trigger and emotion in child, and that alone can make them act a certain way. COMMUNICATION The genetic makeup of teens plays a significant role in adolescent behavior. Works Cited Garelik, Glenn. "Born Bad?." American Health. Nov. 1993: 66-71.SIRS Issues Researcher. Web. 30 Jan 2013. Liptak, Adam . "Supreme Court to Rule on Executing Young Killers." NY Times. The New York Times, 03 Jan 2005. Web. 24 Feb 2013. Lundstrom, Marije. "Kids are Kids- Until They Commit Crimes." Arletahigh. The Sacramento Bee, 01 Mar 2001. Web. 24 Feb 2013. Rodriguez, Luis J. Always Running. New York, NY: Touchstone, eBook. Schroeder, Ryan D., Ronald E. Bulanda, Peggy C. Giordano, and Stephen A. Cernkovich. "Parenting and Adult Criminality:An Examination of Direct and Indirect Effects of Race." Jar.Sagepub. Journal of Adolescent Research, n.d. Web. 24 Feb 2013. Smith, Carolyn A. "Juvenile Delinquency: An Introduction." Prevention Researcher Vol. 15, No. 1. Feb. 2008: 4-7. SIRS Issues Researcher. Web.30 Jan 2013. Wickliffe, Joseph A. "Why Juveniles Commit Crimes." Diss. Web. Is it NATURE vs.NURTURE? or NATURE and NURTURE? Everybody is different; from their genetic makeup to their personality. And sometimes these differences can determine whether they are "made for bad or good". Nature and Nurture TRUST Control & Temper A SENSE OF BELONGING Personality & Character In conclusion... -"Each child is born with a particular temperament [and a capacity for aggression]" - If a person can not control themselves in certain situations they can react aggressively. (anything to channel their emotions) SOCIAL SUPPORT -Beliefs and Values -People skills -Mental Stability -Mindset [mentality: a habitual or characteristic mental attitude that determines how you will interpret and respond to situations.] -Confidence and Self-Esteem - Everyone is born with an exclusive nervous system that can recall and react to situations differently. -Exposure to different experiences STRONG BONDS WITH FAMILY Puberty PROPER DISCIPLINE Research suggests that the genetic fabric people are born with and the relationships they have with their parents, and later their peers have the ability to mould teens into a life of crime. 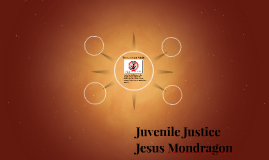 Transcript: Teens are not Adults Juvenile Justice Jesus Mondragon Teens aren't fully responsible enough to have adult rights. I believe juveniles should not be executed when it comes to the death penalty. 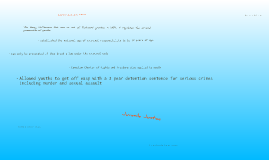 Transcript: Juvenile Justice Evolution of Juvenile Justice in Canada The Young Offenders Act was an act of Parliment granted in 1984, it regulated the criminal prosecution of youths Established the national age of criminal responsibility to be 12 years of age Can only be prosecuted if they break a law under the criminal code Canadian Charter of Rights and Freedoms also applied to youth Difference between Youth and Adult sentences Penalties for Youth crimes Youth Dentention Centres in Canada Allowed youths to get off easy with a 3 year detention sentence for serious crimes including murder and sexual assault 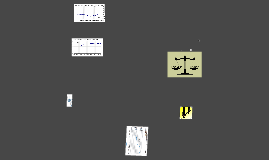 Transcript: By: David Alvarez Inquiry Question: Why is it important to know about Juvenile Justice? Why I chose this topic? When you hear the word Juvenile what kinds of words do you use to describe it? Definition Juvenile- a youthful person. -displaying or suggesting a lack of maturity. -of or relating to or characteristic of or appropriate for children or young people. David's definition Juvenile- Someone who made a mistake and broke the law and is now trying to change his/her life. IF FOUND GUILTY OF ANY OF THESE 21 MEASURE 11 CRIMES YOU WILL DEFINITELY GO TO PRISON AND YOU COULD STAY THERE FOR: Years Months •Pornographic Exploitation of a Child 5 10 •Compelling Prostitution Years Months •Sexual Abuse I 6 3 •Unlawful Sexual Penetration II •Sodomy II •Rape II •Manslaughter II Years Months •Arson I with Threat of Serious Injury 7 6 •Robbery I •Kidnapping I •Assault I •Conspiracy to Commit Murder •Attempted Murder Years Months •Unlawful Sexual Penetration I 8 4 •Sodomy I •Rape I Years Months •Manslaughter I 10 0 •Conspiracy to Commit Aggravated Murder •Attempted Aggravated Murder Years Months •Murder 25 0 Years Months •Aggravated Murder 30 Life THESE 3 MEASURE 11 CRIMES WILL PROBABLY SEND YOU TO PRISON AND YOU MIGHT STAY THERE FOR : Years Months •Robbery II 5 10 •Assault II •Kidnapping II Here are a few suggestions on how parents may help their child succeed when in the Juvenile System: Listen to your child. Be consistent with your child. Do not physically or verbally abuse your child. Express love and affection. Create a stable family environment. Agree upon and follow house rules. Discuss problems. Meet your child's friends and their parents. Get involved in your child's school. Set a good example yourself. Spend time with your child. Reward positive behaviors. Take care of your own personal problems. Get professional help if necessary. Sources: Opposing View points Google Images DCJ Juvenile Services | Multnomah County www.the3rdjudicialdistrict.com The End Child Juvenile Justice By: David Alvarez Parent In Conclusion 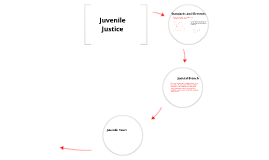 Transcript: Standards and Elements Elements: a. Explain the difference between delinquent behavior and unruly behavior. b. Describe the rights of juveniles when taken into custody. c. Describe the juvenile justice system, emphasizing the different jurisdictions, terminology, and steps in the juvenile justice process. d. Explain the seven delinquent behaviors that can subject juvenile offenders to the adult criminal justice process, how the decision to transfer to adult court is made, and the possible consequences. Standard: The student will explain how the Georgia court systems treats juvenile system. Juvenile Court Elements: a. Describe the history of the juvenile court. b. Describe ways to avoid trouble and settle disputes peacefully. The judicial branch interprets and allows people to appeal their decisions. It also makes sure that the laws adhere to the constitution. In addition, the judicial branch also hears appeals/cases from magistrate courts, probate courts, state courts, and juvenile courts. Judicial Branch Juvenile Justice Standard: The student will analyze the role of judicial branch in Georgia state government. 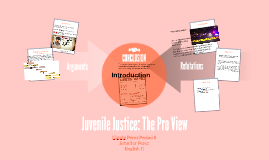 Transcript: Nataly Perez Period 8 Jennifer Perez English II THANK YOU! ( Fox news) - Some criminals are a product of their environments, coming from abusive homes or bad neighborhoods, but a large number of murderers were raised in relatively conflict-free households. Works Cited " The crime rates" 21% of offenders were victims of the crime themselves. The rate of juveniles committing violent crimes has also gone up. Major Moss believes that’s connected to more kids becoming victims of crime, a vicious cycle. (Miami CBS) The juvenile justice system is not hard enough on teens, which causes them to not take their actions seriously and become re-offenders. Pleading guilty because of psychological problems that are not real. Examples: "Affluenza teen" Ethan Couch. Affluenza: Growing up too wealthy and coddled to accept responsibility. Refutations Juvenile Justice: The Pro View Introduction Argument #1 Refutation #1 Science behind teen behaviors: What causes them to commit crimes. Refutation #2 CONCLUSION Arguments Several countries have established a minimum age for juvenile criminal responsibility, defined as the age at which a child becomes responsible for his or her actions and can be legally prosecuted as a juvenile. Juvenile Crime Around The World - From 14 onwards, a child is considered to be responsible for their actions in the same way an adult is. 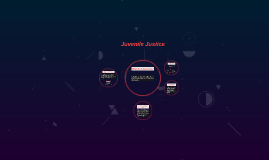 Transcript: Adjudicatory Hearing Juveniles are entitled to an initial hearing, which allows them to discuss the validity and reasons why to the cause of detainment. Although they may have this right, the Supreme Court has ruled that juveniles don't have a constitutional right to bail, which is referred to as preventive detention. This is practiced to protect the juvenile from harming the community and future crime. Who Is A Juvenile? Juveniles are children under the age of 18 in most states, and 17 and 16 in other states. Before, the Juvenile Justice system was much harsher on juveniles due to the fact that all of them didn't get any of their rights due to being underage. Now, everyone, no matter the age, receives the right to an attorney and don't have to incriminate themselves. Juveniles in Custody Juvenile Justice Juvenile Justice Today Status offenses are crimes that only juveniles may commit, not adults. Many status offenses include: runaways, truant offenders, and age-specific crimes. Status Offenses Status Offenses Cont. Usually, juveniles are released if offenses are minor. Initial Hearing Many people believe juveniles that commit crimes are emotionally troubled and should have some sort of counseling or guidance before incarceration. Intake Intake is the informal process by which court officials or social workers decide if a complaint against a juvenile should be referred to a juvenile court. This all takes place after the minor is interviewed and questioned thoroughly to know about their current situation as to why they committed the offense. Juveniles are given a similar type of trial to that of adults called an adjudicatory hearing, where its purpose is to determine the facts of the case. However, more information is protected and withheld from the press due to privacy issues and age-restrictive regulations. 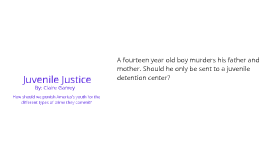 Transcript: A fourteen year old boy murders his father and mother. Should he only be sent to a juvenile detention center? Juvenile Justice By: Claire Garvey How should we punish America's youth for the different types of crime they commit?