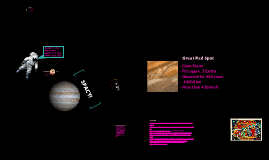 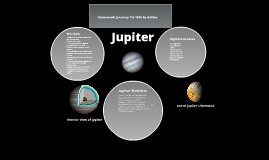 Transcript: Jupiter 1. Jupiter is the largest planet in the solar system. 2. It has 50 moons. 3. The composition of Jupiter resembles that of a star. 4. It has storm systems on its surface. 5. It resembles a star with its own miniture solar system made by its moons. 6.It may have a rocky core the size of Earth. 7. The magnetic field of Jupiter is 20,000 times that of Earth 8.It has rings. 9. Jupiter was named after the most important Roman god. 10. Jupiter was discovered by Galileo. one of Jupiter's 50 moons interior view of Jupiter Discovered: Janurary 7th 1610 by Galileo 1610: Jupiter is discovered by galileo 1979: Voyager 1 observes moons 2009: a comet or asteroid impacts Jupiter's southern hemisphere Significant Dates Ten facts Jupiter Statistics distance from sun: 483,638,564 miles Mass: 1,898.130 x 10^24 kilograms Effective tempurature: 134 K Compared to Earth: 317.828 X Earth Mean Circumference: 439,263.8km compared to Earth: 10.9733X Earth Surface Gravity: 24.79 compared to Earth: 2.53x Earth's gravity 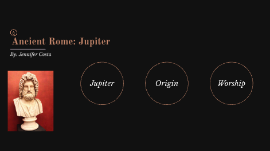 Transcript: By: Jennifer Costa Ancient Rome: Jupiter Jupiter Introduction Jupiter, also called Jove in English; Iuppiter, Iovis or Diespeter in Latin, is the one Roman god considered to have the most power out of them all Symbols Symbols Some of Jupiter's symbols include the eagle, lightning, and an oak tree Family Family Even though Jupiter was married to Juno, he had many affairs which resulted in him having many children. Those children are Apollo, Bacchus, Bellona, Diana, Dike, Discordia, Hercules, Juventas, Mars, Mercury, Minerva, the Graces, Venus. Jupiter's most important title is Jupiter Optimus Maximus which signifies that he is not only the best and greatest, but it shows his role as the father of the gods The temple that Jupiter is worshipped at (Jupiter Optimus Maximus on Capitoline Hill) with his wife Juno and daughter Minerva Jupiter is traced back all the way from the Etruscans He also has parallels with the Greek god Zeus Origin Origin They both are the most powerful gods of both cultures both gods of the sky, thunder, and kings both had identical symbols: the lightning bolt and an eagle Comparisons with Zeus Comparisons with Zeus Jupiter was the one god the people worshipped the most due to the fact he contained the most power He had a reputation of violence which caused people to fear him Many things were named after him, oaths were sworn in his name and many statues and relics were built in honor of him Worship Worship While he was important to Rome as a whole, Jupiter was attributed to help those in combat, so the military thought that he helped with victories He protected Rome in time of war and maintained the welfare of the people during peace Parades with be held by generals after a victory throughout the city to the temple in his honor Libraries of important texts were kept inside of his temple Importance Importance Jupiter's decline mainly had to do with: The fact that emperors would claim to be gods themselves Christianity began to rise He fell out of favor with the people due to the fact that he represented kings which was resented throughout the Republic Decline Decline 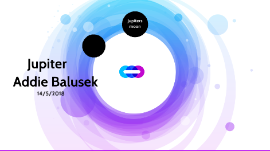 Transcript: Addie Balusek 14/5/2018 Jupiter Facts about Jupiter 483.8 million miles away from the sun Orbital period is 12 years Mass is 1.898 × 10^27 kg (317.8 M) Most common moons include: Callisto, Io, Ganymede and Europa Asteroid Belt Jupiter lies next to the Asteroid Belt in our solar system. The Asteroid Belt is also next to mars as well. Jupiters Gravity Jupiter's Gravity Jupiter's gravity is almost like a slingshot. It literally can throw things like space debris and meteors towards the inner solar system. On the other hand, it kinda also protects us from any other objects in space because those objects can get stuck in its gravity. Jupiters moon Sustaining life? Is it true that Jupiter's moon, Europa, could potentially sustain life. It has a icy layer but underneath it all is water. Market Size Europa Europa is one of the moons in our solarsystem that could have life. It has a mass of 3.09×107 km2 (0.061 Earths) and has a radius of 969.8 miles. It has a layer of ice and it has liquid water underneath. 3 $26 54 Market Size Economical Quality Competitor C name Strengths Weaknesses Strengths Weaknesses COMPANY LOGO ] 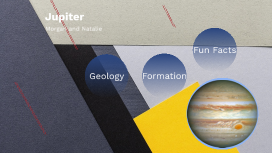 Transcript: Jupiter Morgan and Natalie History History Jupiter was named after the king of the gods in Roman mythology, Zeus. Jupiter helped revolutionize the way astronomers saw the universe in 1610, when Galileo discovered Jupiter's four large moons- Io, Europa, Ganymede and Callisto, now known as the Galilean moons. This was the first time that celestial bodies were seen circling an object other than Earth, and gave major support to the Copernican view that Earth was not the center of the universe. Jupiter's Geology Geology The composition of Jupiter is similar to that of the Sun-mostly hydrogen and helium. Deep in the atmosphere, pressure and temperature increase, compressing the hydrogen gas into a liquid. It is still unclear if, deeper down, Jupiter has a central core of solid material or if it may be a thick, super-hot and dense soup. This gives Jupiter the largest ocean in the solar system—an ocean made of hydrogen instead of water. There is no firm surface on Jupiter, so if you tried to stand on the planet, you sink down and be crushed by the intense pressure inside the planet. Atmosphere Atmosphere The gas planet likely has three distinct cloud layers in its "skies" that, taken together, span about 44 miles (71 kilometers). The top cloud is made of ammonia ice, while the middle layer is likely made of ammonium hydrosulfide crystals. The innermost layer may be made of water ice and vapor. Jupiter's fast rotation-spinning once every 10 hours-creates strong jet streams, separating its clouds into dark belts and bright zones across long stretches. Pictures Pictures Jupiter's Formation Formation Jupiter took shape when the rest of the solar system formed about 4.5 billion years ago, when gravity pulled swirling gas and dust in to become this gas giant. Jupiter took most of the mass left over after the formation of the Sun, ending up with more than twice the combined material of the other bodies in the solar system. In fact, Jupiter has the same ingredients as a star, but it did not grow massive enough to ignite. Jupiter's Location Jupiter is the fifth planet from the Sun and the largest in the Solar System. It is a gas giant with a mass more than two and a half times that of all the other planets in the Solar System combined, but slightly less than one-thousandth the mass of the Sun. About 4 billion years ago, Jupiter settled into its current position in the outer solar system, where it is the fifth planet from the Sun. Location Fun Facts Fun Facts - New research by scientists apparently shows that it rains diamonds on Jupiter and Saturn. According to the research, lightning storms on the planets turn methane into soot which hardens into chunks of graphite and then diamonds as it falls. -Jupiter's magnetic field Is 14 Times Stronger Than Earth's 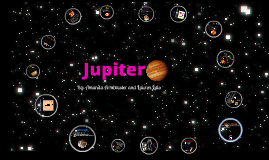 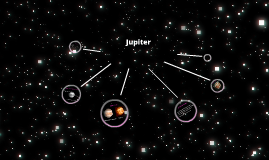 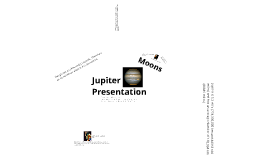 Transcript: Jupiter Presentation This planet was known by ancients. Therefore we do not know when it was discovered. Jupiter has 63 known moons. The four biggest moons are Io, Europa, Ganymede, and Callisto. Jupiter's largest moon, Ganymede, is larger than Mercury. All Jovian planets have rings, and Jupiters no exception. However, it's three rings are very faint, not visible through a telescope. Jupiter is 5.2 AU's (778,330,000 km and 48363184 miles) and has an average diamiter of 142,984 km (88846 miles.) Jupiter is made of Hydrogen, Helium, water, methaine, a couple of other misalanious gasses, and a earth-sized, rocky core surrounded by a couple miles of ice. Presentation by Trel Johnson. Facts by Allen Lentz, Kerigan Flinn, and Delilah Fuller. Done on December 1st. WE ARE THE PINEAPPLES. Moons This is a map of the composition of Jupiter.