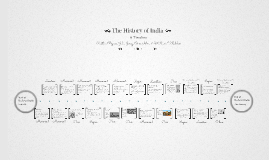 Transcript: The History of India As large, stable ships came into use, mariners increasingly entrusted their crafts and cargos to the reasonably predictable monsoons and sailed directly across the Arabian Sea and the Bay of Bengal. 1398 A.D. to 1515 A.D. Ships of Ancient India Fine cotton textiles came into high demand throughout the trading world of the Indian Ocean basin, so Indian artisans built thriving local industries around the production of high-quality cotton textiles that influenced the structure of the Indian economy and enabled consumers to important different goods from regions that specialized in the production of other commodities. Khemer Empire Chola Kingdom expansion in SE Asia opened markets for Indian merchants and producers Place Angkor Wat 851 A.D. Temple to the hindu god Vishnu. 500-1000s A.D. Because India stood in the middle of the Indian Ocean basin, it was a natural site for emporia and warehouses. Merchants coming from east Africa or Persia exchanged their cargos at Cambay, Calicut or Quilon for goods to take back with the winter monsoon. 500-1000s A.D. 500-1000 A.D. India as a Trade Area 500-1000 A.D. Conquerers spread Islam to the northwestern city of Sind, while merchants from nearby brought Islam to north and south India. Place Region A Timeline Place Creation of Sikhism 500-1000s A.D. A tomb built under Shah Jahan’s command when his wife, Mumtaz Mahal, died giving birth to their 14th child. It is known for its symmetrical beauty, and its architecture greatly mimics that of the Byzantinian style. 500-1000s A.D. Powerful local kings of Southeast Asia charged merchants high fees to use their ports or pass through their waterways. Islam is Spread to India India Industries Portuguese Conquerors Caitlin Byoun, Julia Jeong, Oren Mor, & William Villalobos Human-Environmental Interaction Recording Devices In 1398 Tamerlane conquered Delhi. Alfonso de albuquerque seized the western Indian port of Goa in 1510, and occupied the port of Malacca on the Malay Peninsula. In 1515, he captured Muslim city of Hormuz. 500-1000s A.D. 1653 A.D. During the Mughal dynasty, the thinker Nanak created Sikhism, a mixture between Muslim and Hinduism. This religion remains a primary part of India's culture to this day. Mariners recognized the rhythms of the monsoons, and over time, they built larger ships, which enabled them to leave the coasts behind and ply the blue waters of the Indian Ocean. The Chola Kingdom Expansion Early 1100s Indians used oral accounts called “itihas” to record past events, were accurate but didn’t emphasize dates. Strategies of Mariners Region 711 A.D. The Khemer empire ruled form what is now the boundaries of modern Cambodia and southward along the Mekong River. Taj Mahal 1400s Waterway Taxes Movement End of Medieval India 18th Century Qutb Minar Early 1200s A.D. Minaret built by the sultans of Delhi. This monument stands at a height of 240 feet, impressive for such a structure that has survived to this day. End of the Gupta Dynasty 400 A.D. to the mid 600's A.D. The Huns rampaged across Asia and attacked northern India. The Gupta Dynasty disappeared during the 600s. During the rule of the Rajputs in India, Buddhism began to fade away as simply an idea taken out of Hinduism. Buddha was believed to be a reincarnation of Vishnu. 800s A.D. Shore temple Rajputs Rule Northern India Relief carving from the Buddhist temple at Borobodur in Java depicts a typical southeast Asian ship. Descent of the Ganges Temple located at Mahabalipuram, south of Madras 600s A.D. 700s A.D. Carved reliefs from the 7th century at the temple Mamallapuram, celebrates the Ganges river as a gift from Shiva and other gods 800s A.D. 14th Century Demographic Surge in India The demographic surge encouraged the concentration of people in cities.. Most ports and trading centers, specifically, had populations well over one hundred thousand. Cities in southern India grew rapidly, as a result of the increasing agricultural poductivity in the region. Monsoons in India Throughout the entire era of Medieval India, monsoons would come and go periodically, affecteing the schedules of marine transportationas well as agriculture. Medieval India (perpetual event) Start of Medieval India 300s A.D. Islam in Southern India is Renounced 1336 A.D. The kingdom of Vijayanagar reverts the southern portion of India from Muslim influence back into Hinduism. Carving at Borobodur Location Movement Movement Location Movement Movement Movement Place Human-Environmental Interaction Movement Location Region Place Place Region