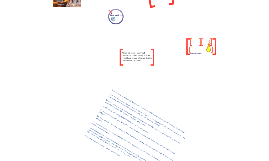 Transcript: "Fire and Ice" was a poem written by Robert Frost, who questioned the way the world will end. The poem, which is only a nine line stanza, effectively uses a series of metaphors to compare how fire and ice both relate to relationships with human. I believe the meaning goes deeper, as fire is relatable to passion, and ice is relatable to hatred in the intellectual world. "Frost views desire as something that consumes and destroys. Desire does indeed have a way of consuming those it infects." "In the next stanza Frost makes the case for the destructive force of ice. He compares ice to hate. This comparison relates to the reader a view of hate as something that causes people to be rigid, unmoving and cold." If you love something dearly, youd have a fire type relationship. It's a "hot" relationship. If you hate something, it'll be a cold relationship because you dont care, hence the phrase," cold-hearted." http://sitemaker.umich.edu/jeff.wheeler/files/poetry_analysis_examples.doc "An extremely compact little lyric, “Fire and Ice” combines humor, fury, detachment, forthrightness, and reserve in an airtight package." "The aim is aphorism—the slaying of the elusive Truth-beast with one unerring stroke. But for Frost, as usual, the truth remains ambiguous" "It is one thing to pull off an offhand remark about the end of days; it is another to make it poetry. Frost masterfully accomplishes both in a single composition." I agree with the poem as being considered ambigious, because the poem has double meaning as explained. The question is unanswered. No one knows how the world will end. Robert Frost did an excellent job at using the metaphorical techniques to show that the world can end due to human activity or a natural disaster. http://www.sparknotes.com/poetry/frost/section9.rhtml Brings a deeper meaning into fire and ice Incorporated fire as not only a source of heat, but as something a person has much passion for, although too much passion can lead to destruction. Frost also incorporated ice as not only a frozen element, but also resentment. Frost left poem unanswered Leaves the readers asking: Will the world end because of natural disasters or mankind's mistakes? Fire and Ice Two meter lengths: four syllables or eight syllables End rhyme with –ire, -ice, and –ate More syllable lines = more personal experience Meter Metaphor Rhyme Robert Frost Poetic Elements 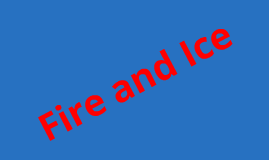 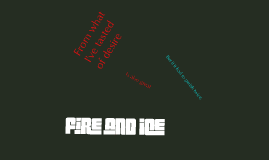 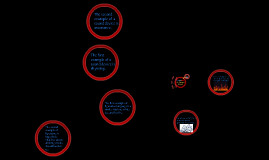 Transcript: Ice and Fire By: Edmund Spenser The first example of figurative language is a simile : My love is like ice, and I to fire. The second example of figurative is hyperbole: That fire which all things melts should harden ice The first example of a sound device is rhyming. But that I burn much more in boiling sweat, And feel my flames augmented manifold? What more miraculous thing may be told, That fire, which all things melts, should harden ice The second example of a sound device is assonance. And ice, which is congeal'd with senseless cold, Should kindle fire by wonderful device? Such is the power of love in gentle mind, That it can alter all the course of kind. The first archetype is fire which means creative energy, or knowledge. But harder grows the more i her entreat? Or how comes it that my exceeding heat Is not allayed by her heart-frozen cold The second archetype is ice which means ignorance or darkness. My love is like to ice, and I to fire: How comes it then that this her cold so great Is no dissolved through my so hot desire 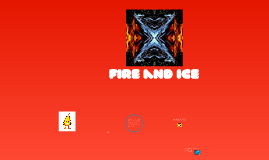 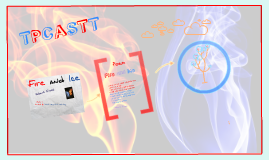 Transcript: TPCASTT The author is very relaxed about this topic. He seems to feel that we are going to die either way. P: Paraphrase What do you think the title means? T: Title (again) The Title refers to how the the world will end, wether it will be in fire or ice. T: Title -Robert Frost Theme "Fire And Ice" Could mean that the poem is about mixed feelings or heat and cold. TPCASTT ... small The poem can be summerized, the world is going to end, by fire or by ice. A: Attitude Robert Frost Created by: Cassie, Joey, Lizzi, and Mary How would you paraphrase this poem? C: Connotation Some say the world will end in fire, Some say in ice. From what I've tasted of desire I hold with those who favor fire. But if it had to perish twice, I think I know enough of hate To say that for destruction ice Is also great And would suffice. The shift in the poem "Fire and Ice" is a line that quotes, "But if it had to parish twice..." Imagery with Fire and Ice Fire and Ice Poem What connotation does the author use? It has a more nuetral tone because it explains how the world is thought to be destroyed. Duality of fire and ice S:Shift Fire and Ice 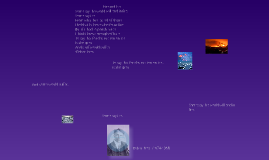 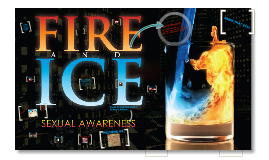 Transcript: Founded on January 13, 1913 by twenty-two collegiate women at Howard University. These women wanted to use their collective strength to promote academic excellence; to provide scholarships; to provide support to the underserved; educate and stimulate participation in the establishment of positive public policy; and to highlight issues and provide solutions for problems in their communities. Sexual Assault Crisis Intervention (SACI) The first outbreak usually occurs within two weeks after the virus is transmitted, and the sores typically heal within two to four weeks. Other signs and symptoms during the primary episode may include a second crop of sores, and flu-like symptoms, including fever and swollen glands. GENITAL WARTS (also known as Human Papilloma Virus - HPV) Appears on penis, vulva, vagina, cervix, in or around anus or in throat. Increasing rapidly, especially among teenagers. Warts may be tiny or like cauliflowers, or flat. Virus is spread by oral, anal or vaginal sex with someone who has the HPV virus. Warts may appear a few weeks after contact or months or years later. Sisterhood Scholarship Service NAME THAT STI!!! Delta Sigma Theta Sorority, Inc Chlamydia is a disease caused by the bacteria As many as 1 in 4 men with Chlamydia have no symptoms. Only about 30% of women with Chlamydia have symptoms First stage: painless sores or open ulcers may appear on the anus, vagina, penis, or inside the mouth Second stage: an infected person may experience flu-like symptoms and possibly hair loss or a rash on the soles and palms Treatment: Antibiotics CURABLE Picture#2 Syphilis PICTURE #9 Picture #5 Within the first few weeks, when first infected with HIV, you may have no signs or symptoms at all, although you're still able to transmit the virus to others. Many people develop a brief flu-like illness two to four weeks after becoming infected. Signs and symptoms may include: Fever Headache Sore throat Swollen lymph glands Rash Years later, you may remain symptom-free for years. But as the virus continues to multiply and destroy immune cells, you may develop mild infections or chronic symptoms such as: Swollen lymph nodes — often one of the first signs of HIV infection Diarrhea Weight loss Fever Cough and shortness of breath Develops to AIDS when completely immunodeficient and minor infection occurs Intense itching Small bumps Rash Treatment: Insecticide lotions CURABLE Scabies Conclusion Signs and Symptoms zoom in, and add details to these Frames Picture #1 HIV is found in specific human body fluids. If any of those fluids enter your body, you can become infected with HIV. Signs and Symptoms Burning sensation during urination Discharge from the penis or rectum Testicular tenderness or pain Rectal discharge or pain Painful sexual intercourse Rectal pain or discharge liver inflammation similar to hepatitis Vaginal discharge Treatment: Antibiotics CURABLE Gonorrhea- “The Clap” Caused by a protozoan parasite called Trichomonas vaginalis and is a cause of vaginal infections in women and urethral infections in men. Women contract trichomoniasis from infected male or female partners while men usually contract it only from female partners HERPES Commonly infects the mouth and lips. Can also infect the genitals by oral-genital or genital-genital contact with a person who has the herpes infection. Signs and Symptoms Some pictures are disturbing! MEN Painful urination Pus-like discharge from the tip of the penis Pain or swelling in one testicle WOMEN Increased vaginal discharge Painful urination Vaginal bleeding between periods, such as after vaginal intercourse Abdominal pain Pelvic pain Treatment: Antibiotics Signs and Symptoms Manly Deeds, Scholarship, and Love for All Mankind You need close skin-to-skin contact with an infected person to catch scabies The female scabies mites burrow under the skin and lays 2 to 3 eggs daily. These eggs hatch and become adults within 10 days Signs and Symptoms Question #8 Alpha Phi Alpha is the first Inter-Collegiate Black Greek Letter fraternity. It was founded on December 4, 1906 at Cornell University in Ithaca, New York. Its founders are known as the "Seven Jewels". Alpha Phi Alpha evolved into a primarily service organization and provided leadership and service during the Great Depression, World Wars, and Civil Rights Movements. Viewer Discretion is advised HIV/AIDS Picture#6 SIGNS AND SYMPTOMS Picture #7 Signs & Symptoms There may be no symptoms at first. It's called a "silent" epidemic. Then 1 to 3 months after contact cauliflower-like bumps may appear inside and outside genitals and/or rectum. May cause irritation or itch. Often painless. Bumps may be very tiny and almost invisible but they spread fast. Picture #3 Our Mission Unusual penile discharge Painful urination Burning sensation after ejaculation Tingling inside the penis. Genital itching and/or burning Vaginal or vulval redness Frothy yellow-green vaginal discharge with a strong odor Blood spotting Treatment: