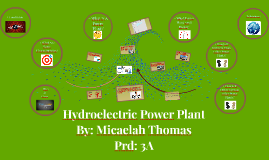 Transcript: + What Are Some Characteristics? * A power plant is an industrial location that it utilized for the generation and distribution of electric power on a mass scale. + References +Pros & Cons Hydroelectric Power Plant By: Micaelah Thomas Prd: 3A * Consists of many different components some of which include: - Gates - Turbine - Switchgears - Penstocks - Generator - Transmission - Inlet Valve - Power Transformer Line Cons + What Power Plant Am I Doing? + What Is A Power Plant? Pros * Today we basically learned what a hydroelectric power plant is, how it is different from other power plants, and how it is both great and harmful for the environment at the same time. + How Is It Different From Other Power Plants? * Hydroelectric Power Plants are different because they use water and turbines to generate electricity versus idolizing battery power or actual electrical force. + How Is It Different From Other Power Plants? * http://www.latvenergo.lv/portal/page/portal/english/latvenergo/main1/about_latvenergo/energy_production/hidroelektrostacijas/ * https://energy.gov/eere/water/types-hydropower-plants * Renewable/Green * Reliable * Flexible * Safe * Environmental Consequences * Expensive * Droughts * Limited Reservoirs + Conclusion * This Prezi will star the hydroelectric power plant. * In a hydroelectric plant, the gravitational force of water is used to run a turbine . This turbine is then combined with a generator to make electricity. 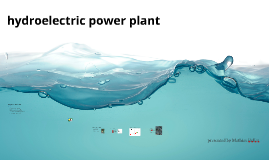 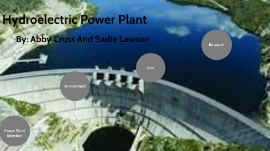 Transcript: By: Abby Cross And Sadie Lawson Hydroelectric Power Plant The town of Oxford is in need of a new power plant. Oxford is a city with approximately 5,500 residents and sits in a valley, protecting it from harsh windy conditions and supplying it with comfortable weather year-round. Along the outskirts of the town is Jackson Lake Park. Several tourists visit the park throughout the year to enjoy its beautiful scenery, rich wildlife, and to participate in outdoor recreational activities like fishing, hiking, swimming, boating, and camping. The lake is fairly shallow, so visitors enjoy the ability to wade in the lake with ease. The Jackson River runs through town and empties into Jackson Lake. Although there are only a few residents that live along the lake, the river cuts through the heart of the city, passing through the business district and residential areas. Despite the river location and limited depth, Oxford has only had two major floods in the past 100 years. However, both floods caused severe water damage to the local residents and businesses. As the city considers its options for building a new power plant, several residents have voiced their concerns. Residents are looking for an energy source that is environmentally friendly, creates little waste, is renewable, and affordable. In addition, residents want to preserve the natural habitat of Jackson Park. Scenario Power Plant Selection Power Plant Selection What energy source should your power plant utilize? Hydroelectric resource What resources (energy sources) are available for your power plant A river Work How does the energy source/power plant work – how will it generate the power needed to provide electricity to your residents? Hydropower plants capture the energy of falling water to generate electricity. A turbine converts the kinetic energy of falling water into mechanical energy. Then a generator converts the mechanical energy from the turbine into electrical energy. where? What will the location of the plant be and how will its location affect the environment or its residents? Before the river leads into the residential area Environment Is your energy source renewable or nonrenewable? It is renewable environment How will the power plant affect the environment positively and/or negatively? It’s positive in the source that it doesn’t pollute but it does impact the environment around it waste products Are there waste products produced? There is no waste products benefits ?risks? Are there any benefits to using this form of energy? Any risks? Its a clean source but takes an impact on surrounding environment Cost How much would it cost to construct a power plant that would supply enough energy for the city of your size? Cost per month to produce energy = $4,249,575 Total cost to build with land land = $34,797,768,000 Grants Grants DE-FOA-0002128-$68,000,000 affordable Is this method really affordable? With the correct grants its affordable Research Research https://www.grants.gov/web/grants/search-grants.html?keywords=hydroelectric%20power%20plant www.wvic.com › content › how_hydropower_works 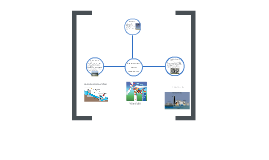 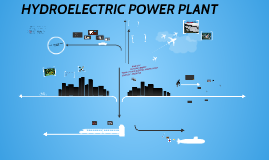 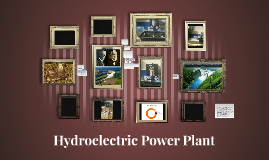 Transcript: The waste produced by nuclear reactors needs to be disposed off at a safe place since they are extremely hazardous and can leak radiations if not stored properly. Such kind of waste emits radiations from tens to hundreds of years. The mixed wastes cause hazardous chemical reactions and leads to dangerous complications. These wastes can be used to make nuclear weapons. The Hydro Power Plant is near Fredericksburg, Virginia. The dam is on the Rapidan river which is a fast flowing river. Virginia is a humid and subtropical place so it doesn't have many droughts. It has a good amount of rainfall each year. Since Virginia has a large trout population, so you can put a fish ladder on the dam to let fish pass on through without getting hurt. Has relatively low maintenance and operating costs. By: Hydro Rapidan Inc. The buildup of water in the lake means that energy can be stored until needed, when the water is released to produce electricity. Nuclear energy uses uranium which is a rare resource and not found in many countries. Since it is rare, Nuclear power is nonrenewable. Small radiation leaks can cause devastating effects. Some of the symptoms include nausea vomiting, diarrhea and fatigue. People who work at nuclear power plants and live near those areas are at high risk of facing nuclear radiations, if it happens. In the U.S. Hydro power produces enough electricity to serve the needs of 28 million people Nuclear power plants are very expensive which costs around billions of dollars. They also take 5-10 years to build. Nuclear energy has given us the power to produce more weapons than to produce things that can make the world a better place to live in. Mechanics of Hydro Power Plant They can easily be upgraded to incorporate the latest and most efficient technologies. The water flows through the turbine which makes the turbine start to spin. Then it turns a metal shaft in the electric generator which is the motor that produces electricity. The energy from the moving water turns into mechanical energy. The power lines are connected to the generator that carry electricity to homes. Not only does building a dam contribute produce electricity, it can also stop flooding, helps navigating the flow of the river, supply water for agriculture,industries, and households. It cuts down the fast current of the river making it a place to do activities like swimming, boating, etc. Reports say that radioactive wastes take almost 100,000 years to get back to the original form. Nuclear Power Plants It is very cost effective and is not very expensive. Hydro power does not "use" water, all of the water is returned to its source of origin. Hydro power produces about 97% of renewable energy. It is very clean and it prevents the burning of 22 billion gallons of oil and 120 million tons of coal each year. Hydroelectric Power Plant Hydroelectric Power Location of Hydro Power Plant Hydro dams are known to last around 100 years which make the investment worth it. 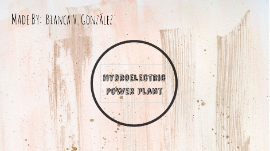 Transcript: Made By: Bianca V. González Hydroelectric Power Plant Hydroelectric Power Plant A hydroelectric power plant is a power plant that makes energy out of waters movement. What is a Hydroelectric Power Plant? What is a Hydroelectric Power Plant? Hoover Dam Hoover Dam How is energy transformed or transferred? Potential Energy Kinetic Energy Mechanical Energy Electric Energy How is energy transformed or transferred? It starts off by potential energy from a river or dam changing to kinetic energy as water flows downhill, then kinetic energy converts to mechanical energy and it moves the turbine making the generator transform mechanical energy to electrical energy. Explanation Explanation Picture of a hydroelectrical power plant Picture of a hydroelectrical power plant Does not pollute the air or water Hydroelectric power plants are relatively inexpensive to operate. Advantages Advantages Dams damage wildlife habitats Dams can affect water quality and reduce the flow of waterdownstream Droughts can affect hydroelectric power plants Disadvantages Disadvantages Is one of the oldest power sources on the planet It was used by farmers as far back as ancient Greece. Niagara Falls was the site of the country’s first hydroelectric generating facility (built in 1881). The oldest hydroelectric plant is Cragside in Rothbury, England The largest hydroelectric plant is La Grande in Quebec, Canada Fun Facts Fun Facts In the United States over half of the electricity generated from hydroelectric power is concentrated in Washington, Oregon, and California. The largest site in the U.S. is Grand Coulee in Washington which has 33 generators. Hydro generators can start producing electricity within 90 seconds and this makes them suitable for backup generators in case of failures. There are more than 100 hydroelectric power plants in Australia which produce the majority of the renewable energy produced in the country. Cont. Cont. Conclusion: Conclusion: Imagine living without power. For example Hoover Dam gives power to Nevada, Arizona, and California. Meaning you can power a huge place with only water. This is mind blowing that you could live a great life with not that much polution. Well it obviously has it's ups and downs because it can harm wild life and harm the quality of water. Beside the point if we didn't have water we couldn't generate power, or live at all. Hoover Dam 2009 Hoover Dam 2009 Thx For Watching Thx For Watching