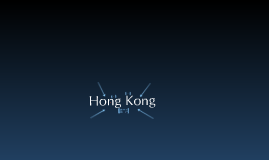 Transcript: By Destiny Buendia & Stephanie Barron The bustling city of Hong Kong was just a collection of fishing villages when claimed by Britian in 1842. The region was first incorporated into Imperial China in the Qin Dynasty, and served as a trading post and a naval base during the Tang Dynasty and the Song Dynasty. Hong Kong became China's first special administrative region, and Tung Chee Hwa took office as the first chief executive of Hong Kong Hong Kong is a small-sized island covering 429 Sq. Miles. Hong Kong began as a coastal Island located off the southern coast of China. Hong Kong consists of the island of Hong Kong, Stonecutters Island, Kowlook Peninsula. Hong Kong has a subtropical climate because of the wide temperature range and cooler winters. Most widely spoken language is chinese and english Chinese new year Dragon boat festival Mid-autumn Festival Hong Kong has participated in olympic games and other Asian games events. Martial arts in Hong Kong is accepted as a form of entertainments or exercise. 3 Years of kindergarten 6 years primary education 3 years junior secondary education Non-compulsory 2 year senior secondary education 2 years matriculation course Chinese new year is the most important celebration in the Hong Kong culture Unlucky saying are considered deffensive Many people travel yearly to the cemetery on Ching Ming festival to honor and worship their ancestors. Hong Kong Geography Language History Of Hong Kong Religion & beliefs Education Tung Chee Hwa Holidays Sports Culture 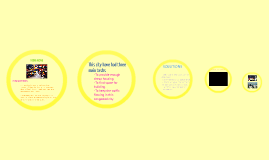 Transcript: This city have had three main tasks .Is situated on the coast of southern China. It covers 1000 km. , but the city itself only covers about 500 km2. The rest is made up of rural area and numerous small islands. .Is a moderm place, it has 6 million people. Is a successful financial and manufacturing centre. There are a lot of people in a small place. SOLUTIONS HONG KONG A VIDEO SHOWS THE TRAFFIC IN HONK KONG -To provide enough cheap housing. -To find space for building. -To keep the traffic flowing in this congested city. Characteristics: -Tower blocks have been built to save space. -Shanty towns are being destroyed. -Flats are being built to rent them to poor people at cheap prices. -The traffic problems haven't been so yet. 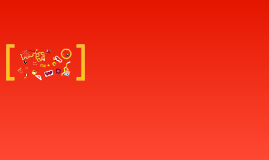 Transcript: Hong Kong Hong Kong Special Administrative Region of the People's Republic of China Victoria Geography Hong Kong island is adjacent In the north with Kowloon In the west with Lantau island Weather Hong Kong has a subtropical weather It goes from 35°C- 10°C The flag and also the coat are color red and have a white Bauhinia blakeana Hong Kong is a mix between chinese and english culture Languages Yuè Mandarin Wu Cantonese English Economy Is the biggest financial center in Asia The 80% of the economic activities are financial sevices Religion You can find many religions in Hong Kong. The people also venerate their ancestor Landmarks Tian Tan Buddha The biggest statue of Buddha in the world Victoria Harbor Is between Kowloon peninsula and Hong Kong Island. And you can see the Largest Permanent Light and Sound Show every night. Temple Man Mo This temple is to give honor to the literature and war gods Hong Kong Park Is a place of peace and tranquility Food Hot Pot Sushi The people of Hong Kong travel by train, taxi, bus, subway or ferry boat Famous people Chan Kong Sang Kelly Chen Johnnie To The End 香港的 Danny 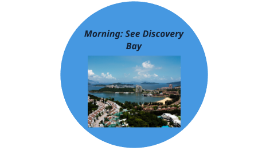 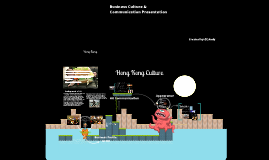 Transcript: Business Culture & Communication Presentation Created by (R)Andy Hong Kong Background of HK Hong Kong was occupied by the British colonies from 1841 up intill 1997, thats China resumed the exercise of sovereignty over Hong Kong, ending more than 150 years of British colonial rule. Hong Kong is a Special Administrative Region of the People's Republic of China. Its foreign relations and defense are the responsibility of China. However, Hong Kong is a customs territory and economic entity separate from the rest of China and is able to enter into international agreements on its own behalf in commercial and economic matters. Hong Kong is also home to the famous Bruce Lee. On behalf of Bruce Lee, who died at the age of 32 on July 20th 1973, a bronze statue costing over $100,000 was built to honor his legacy. The statue is an attraction near the waterfront at Tsim Sha Tsui. Population Business Profile Of HK Hong Kong’s free market economy is predominantly dependent on the international trade and finance. It is a global city that is a company and business hub, as well as being home to many famous banks and Hong Kong Stock Exchange. It has a major capitalist service economy with low taxation, free trade and minimum government intervention. Imports Of HK Roughly $2,714,756,332 dollars is imported with Hong Kong to Canada in the year of 2011. Top 5 Imports of HK to Canada 1. Electrical machinery and equipment 19.10% 2. Pearls, precious stones or metals 13.79% 3. Printed books, newspapers, etc. 8.00% 4. Toys, games, sports equipment 6.31% 5. Boilers, mechanical appliances, etc. 6.09% Exports of HK Roughly $318,466,167 dollars is exported from Hong Kong to Canada in the year of 2011. Top 5 Exports of HK to Canada 1. Pearls, precious stones or metals 39.14% 2. Aircraft and spacecraft 7.05% 3. Electrical machinery and equipment 5.67% 4. Meat and edible meat offal 5.57% 5. Nickel and nickel articles 5.53% Appearance -The color red is considered a lucky color in Hong Kong. -When dressing for a business meeting select a red tie to impress your host. -The color white is synonymous with death. -It is common in China to show one's surprise or dismay by sucking air in quickly and loudly through the lips and teeth. If you have been shown this gesture, it would be advisable to modify your request. Your host is obviously displeased. Behavior The handshake is fairly common in Hong Kong, however a slight bow will show a sign of respect. A round of applause may greet you during your visit. The Chinese like to applaud. You are expected to return the applause out of respect. Because Hong Kong is so densely populated the Chinese tend to converse very closely together. Do not rub your chopstick together before dining. It implies that you have been given poor quality chopsticks that may have splinters. Works Cited http://export.gov/hongkong/ Economy Background http://www.asiapacific.ca/statistics/trade/bilateral-trade-asia-product/canadas-merchandise-trade-hong-kong-sar HK Communication Hong Kong Culture http://www.state.gov/r/pa/ei/bgn/2747.htm Hong Kong is predominately Chinese with a population of approximately 7.1 Million as of 2012 and because Hong Kong is so densely populated the Chinese tead to converse very closely together. http://www.cyborlink.com/besite/hong_kong.htm -The use of only black and white materials for presentations, as colours are very significant. -Patience is important. The Chinese do not make business decisions quickly. -Silence is held in high regard in Hong Kong. Allow your host to contemplate without interruption -The handshake is fairly common in Hong Kong, however a slight bow will show a sign of respect. 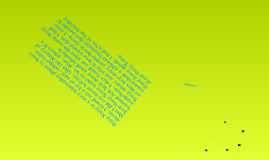 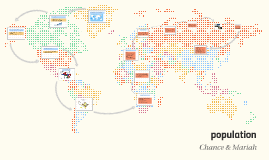 Transcript: - A negative affect on the enviroment would be the increase in pollution throughout the city, and wooded areas - Urbanization helps keep everyone located in one central area, therefor protecting the forest, and the animals habitat 7,337,771*.008= 58,702.17 years 70/.008= 8,750 people Hong Kong, Hong Kong - Expanding urban areas to accomidate growing population - One child limit Keeps population down - Raise retirement age Increases the working class Nation: Positive Better education due to increase in avaliable workers to pay taxes Expanding buiseness, which increases spending money Negative Over priced housing due to increasing population Loss of soace due to expanding living arrangments Chance & Mariah Pollution: Future? Affects: Enviroment population size: 7,337,771 population change: housing, education, jobs/ work force Hong Kong vs. United States Increasing Populaion Pressure Water pollution With the water being polluted it makes drinking water hard to find or get is was caused by people not taking care of garbage correctly, and sewer systems flowing into water ways population US population: 323,491,912 and counting Hong Kong population: 7,337,771 Pollution Future population? Urbanization: These pollutions are affecting human health due to breathing issues caused by them, and them not being able to find clean water to drink without that leading to health issues from bacteria as well Breathing problems is a big concern for the population There isn't very many birth defects in Hong Kong according to recent study The pollution in Hong Kong will not affect us due to the distance between our two countries, the water ways are a possible issue to us if it continues to travel towards the United States -Our nation is trying to be more green by: riding bicycles taking care of trash planting more vegetation finding ways around factories pollution - To figure out how to make regulations for the companies putting out pollution due to the coal use -The air pollution will affect the ozone layer therefor affecting all of us, and our breathing - The water pollution will follow through water ways and make i into the ocean affecting our sea animals that we eat and that travel all throughout the ocean Air Pollution: visibuility is less than eight kilometers for 30% of the year Serious cases of asthma & bronchial Is caused by coal-fired companies and vehicals Population Density: - The slow growth rate in the population - Not very many people throughout the city - It made a slight change due to the minimal growth rate increase of 5% Population Crop Production Affects: Nation Human Health: 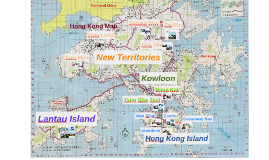