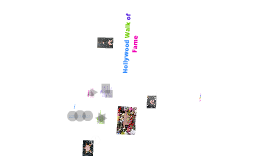 Transcript: Hollywood Walk of Fame History Facts There are two Michael Jackson stars represent the singer/dancer/songwriter and the radio personality. When the singer/songwriter Jackson died, in 2009, fans mistakenly began leaving flowers, candles, and other tributes at the Vine Street star. The Walk of Fame runs 1.3 miles east to west on Hollywood Boulevard from North Gower Street to North La Brea Avenue. Joanne Woodward was the first person the get a star. Williams is the most common name. There are around 10 million visitors a year Restrictions To have a star you have to be in the 5 categories- movies, music, TV, radio, or theatre but they can bend the rules like they did for Michael Jordan and the First men on the moon. By Brittany :) Established 1958. The Hollywood Chamber of Selling credits E. M. Stuart, its volunteer president in 1953, with the original idea for creating a Walk of Fame. Stuart proposed the Walk as a means to "maintain the glory of a community whose name means glamour and excitement in the four corners of the world.” Location The main star Hollywood Blvd. and Vine St, Hollywood, Los Angeles USA 6801 Hollywood Boulevard near Kodak Theatre 19N 34E first star 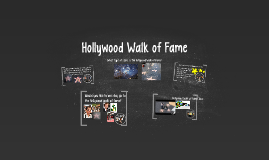 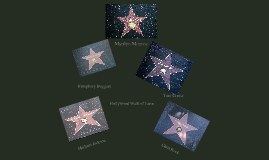 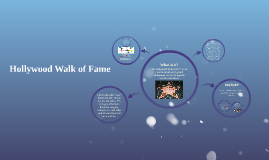 Transcript: The man credited with the idea for creating a Walk of Fame was E. M. Stuart in 1953. It took 5 years to conclude everything and inaugurate it. Hollywood Boulevard: from Gower Street to LA Brea Avenue, and on Vine Street: from Yucca Street to Sunset Boulevard. HISTORY What is it? The Hollywood Walk of Fame is an internationally-recognized Hollywood icon and a popular tourist destination. Hollywood Walk of Fame About 2.500 five-pointed terrazzo and brass stars embedded in the sidewalks along 15 blocks of Vine Street in Hollywood, CA. The first person who gets an star in the Walk Of Fame, was Joanne Woodward, winner of an Oscar for Best Actress in 1957. Nomination process "maintain the glory of a community whose name means glamour and excitement in the four corners of the world." Each year an average of 200 nominations are submitted to the Hollywood Chamber of Commerce Walk of Fame Selection Committee. Anyone, including fans, can nominate anyone active. The committee selects approximately 20 celebrities to receive stars on the Walk of Fame during the following year. One posthumous award is given each year as well. These sidewalk "stars" honor not only movie actors, but radio, TV, & stage performers, directors, singers, songwriters, and other well-known show-biz personalities. LOCATION 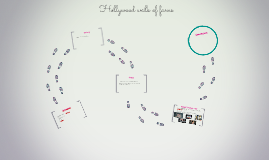 Transcript: Gategories Today: The walk of fame began in 1953. Donald Trump got a star for his producing work in the Miss Universum show in 2007. His star has been on the news lately, because it has been vandalized many different ways. Hollywood walk of fame Conclusion Today, the walk of fame has about 2600 stars. It has annually over 10 million visitors and it is one of California's biggest sights. History The walk of fame has 5 gategories: TV Motion pictures Music Radio Theather Donald Trump's star 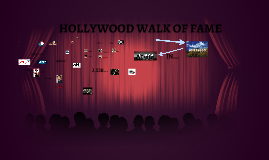 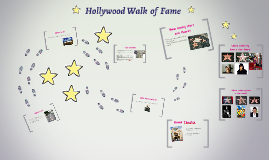 Transcript: The emblems Kodak Theatre Which celebrity have a star there? How many stars are there? The emblems symbolize five categories within the entertainment industry. It is situated below the inscription, in the lower half of the star field. The categories are: Classic film camera: representing motion pictures Television receiver:representing broadcast television Phonograph record: representing audio recording or music Radio microphone: representing broadcast radio Comedy/tragedy masks: representing theatre/live performance (added in 1984) There are over 2,488 stars at the moment. 2 new starts are added every month. Hollywood Walk of Fame -It is a series of sidewalks along Hollywood Boulevard and Vine Street. - It is a reward for people who work hard in the entertainment industry. WHo did create it? What is it? Hollywood Walk of Fame is in Hollywood (California). E.M. Stuart created Hollywood Walk of Fame in 1953. Which celebrity have a star there? Where is it? It is located in Hollywood Boulevard. The Oscars take place in this theater. 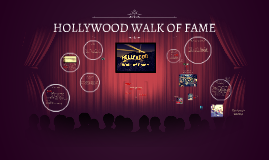 Transcript: Thank you for watching! Selection and Construction Nomination Process and Homage Every year, an average of 200 nominations are submitted to the Hollywood Chamber of Commerce Walk of Fame . Nominees must have a minimum of five years' experience in the category for which they are nominated and a history of "charitable contributions". Posthumous nominees must have been deceased at least five years. History Origin Description The first star awarded through an award ceremony was on February 9, 1960 and went to the motion picture actress Joanne Woodward. Contents The Hollywood Walk of Fame can be found on the sidewalks along Hollywood Boulevard and Vine Street in Hollywood, Los Angeles, California, USA. It serves as an entertainment hall of fame for achievement in theater, the movies, radio, recording, and TV. In 1984, a fifth category, Live Theatre, was added to permit acknowledgement of contributions from the live performance branch of the entertainment industry, and a second row of stars was created on each sidewalk to alternate with the existing stars. Nominations are submitted annually by May 31, and the Walk of Fame committee meets to pick the next year's group of honorees. Each June, the new recipients are announced for the following year. Each year, approximately 25 new persons are selected for a star on the Walk of Fame. Expansion and Restoration To encourage supplemental funding for the project by corporate sponsors, the "Friends of Walk of Fame" program was inaugurated. Absolut Vodka became the first Friend with a donation of $1 million, as the first major contributor to the restoration process, followed by L'Oréal. HOLLYWOOD WALK OF FAME The art deco-style sculpture represents the diversity of women in Hollywood, and depicts actresses Dorothy Dandridge, Anna May Wong, Dolores Del Rio, and Mae West. HOLLYWOOD WALK OF FAME ATESTAT LA LIMBA ENGLEZĂ 2014 COLEGIUL ALEXANDRU CEL BUN GURA HUMORULUI The Walk Today Unique and usual Teacher, Luminiţa Brînduşa Cîmpan 2014 Random acts of vandalism occur on the Walk on a regular basis, ranging from profanity and political statements written on stars with markers to attempted removal of brass emblems with chisels. Some fans show respect for star recipients both living and dead by laying flowers or other symbolic tributes at their stars. When recording artist Michael Jackson died in 2009 flowers and vigil keepers appeared at both his and radio commentator Michael Jackson's stars. The person who came up with the idea of creating this project was Em Stuart. The Walk of Fame was created in 1958. Student, Ioana-Iuliana Rusu In 2008 a long-term restoration project began with an evaluation of all 2,365 stars on the Walk at the time. The Four Ladies 1. Descriptin 2. History: Origin Selection and Construction Expansion and Restoration Theft and Vandalism 3. The Walk Today: Unique and unusual Fictional characters and their creators 4. The Four Ladies 5.Nomination Process and Homage Theft and Vandalism Fictional characters and their creators In 1978, in honor of his 50th anniversary, Mickey Mouse became the first animated character to receive a star.