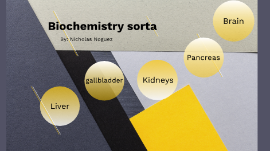 Transcript: By: Nicholas Noguez Biochemistry sorta Liver Located in the upper right hand portion of the abdoman The Liver beneath the diaphragm on top of the stomach, right kidney, and intestines produces impotrant clotting proteins Processes plays an important role in metabolism produces bile and filters out the blood Important chemicals Vitamin K blood clotting agent Lipase enzymes used to break down fat Ammonia byproduct of breaking down fats and proteins The Gallbladder gallbladder Stores bile thats pretty much it . its just for storage The Kidneys Kidneys Located behind the peritonium, the left on is slightly higher Helps filter blood Regulates fluid levels, ph levels, and osomolarity Helps control glucose levels Erthryopoietin- stimulates red blood cell synthesis Renin- helps control the balance between salt and water The kidneys regulate sodium, phosphorus, potassium, and other chemicals. Important chemicals The pancreas Pancreas Located behind the stomach in the upper left abdomen Helps convert food to energy Produces insulin Insulin- Allows the body to use the sugar in carbohydrates from the food you eat.Also keeps your blood sugar levels from getting too high Creates enzymes used in digestion Important chemicals Located in the skull Controls all of the bodies functions. The brain is made up of many different parts called lobes The main parts are the Frontal lobe, Parietal lobe, Temporal lobe, Occipital lobe, Cerebellum, and the Brainstem The brain Brain Frontal Lobe- motor control, problem solving, and speech production Parietal lobe- touch perception, body orientation and sensory discrimination Temporal lobe- auditory processing, lanuage comprehension, and memory/information retrieval Occipital lobe- sight, visual reception and visual interpretation Cerebellum- balance and coordination Brainstem- involuntary respones like breathing and blinking Functions of Lobes Dopamin- Helps control reward and plessure centers(neurotransmitter) Serotonin- Helps control sleep, apetite, and mood. Too little serotonin can cause depression. Glutamate- Allows the signals sent by the brain to be recieved GABA- The opposite of glutamate. It slows the reception of signals from the brain. Acetylcholine- Plays an important role in learning and memory. The chemical the brain releases to neurons to send signals to the brain. Important chemicals 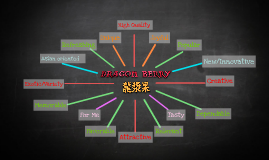 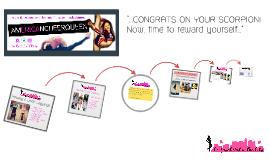 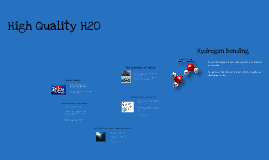 Transcript: High Quality H20 Water's Polarity The area around the oxygen atom has a slight negitive charge (Negitive Dipole) Waters ability to be a great lubricant It's abundance combined with its properties of cohesion, solvation and heat capacity makes water a great lubricant in the bodies of organisms Water's ability to be a great temperature regulator Lot's of anmals can live in bodies of water and not die from the water being to cold or to hot Waters ability to be a great solvent The charged ends of the other polar molecules become attracted to the polar ends of water molecules and break apart The Cohesion of water An example would be allowing water to travel up roots to leaves and the water beads on a spider web. Hydrogen bonding The oppositely charged ends cause water molecucles to be attracted to one another. The weak forces that hold opposite dipoles of the H20 together are called Hydrogen Bonding It reduces the friction between two objects Water absorbs energy from sources such as the sun very slowly Ex. Salt dissolving in water Water can either absorb or withstand releasing a lot of energy before it changes temperature Water in saliva allows for food to become moist and it lubricates the esophagus when swallowing Is the term for molecules of a substance sticking together This is caused by hydrogen bonds Water causes ionic bonds to break apart by surrounding the ions. The area around the hydrogen atoms have a slight positive charge ( Positive Dipole) 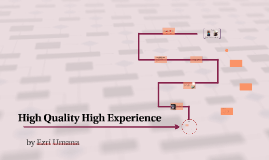 Transcript: - "There is wealth of research data that says that attractive people, but especially women, get better grades in school, more date, more marriage proposals, higher saleries, better job offers and so on" (Rose Weitz) by Ezri Umana Start Clean Cut "Bad hair days" affect individuals' self-esteem increasing self doubt, intensifying social insecurities, and becoming more self critical in general." (New study) Healthy hair Bad hair experience? Get your hair done right the first time ! In my speech i will show you why getting your hair done by a higher-end salon is worth it. End What if i told you... You must make time for your personal needs. You will benefit physically, mentally and emotionally. Make an appointment with a quality salon/stylist High Standard Need- We take our time! Book an appointment with me !:) -Women haircuts = 6-8 weeks -Men haircuts = 2-4 weeks Credibility Same cost, priced different Time, corrections Redo's! - How will you benefit by going to a high-end salon or hairdresser? Healthy Hair vs. Damaged Hair Hair color is important ! Continued Education Shadowing Practical Testing Quality vs Quantity Satisfaction - "Home-bre" was done by a licensed professional! High Quality High Experience -Get your hair done right the first time ! - Make an appointment at a quality salon Cost !! Master Designer at Ulta Beauty Salon in Queen Creek Started doing hair at 18 Been with the company for almost 3 years. Self-Esteem- No time limit Listen to our clients Build relationships " In cheap high-volume chains, the business model is centered around doing as many low-priced haircuts as quickly as possible."(Alexander) 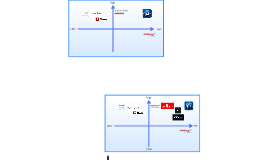 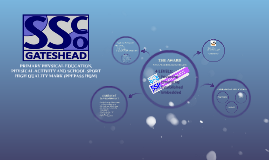 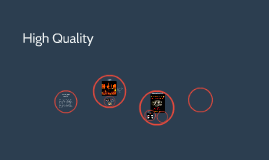 Transcript: Lebron is one of our endorsers. He uses our products all the time when he's off the court. Endorsement High Quality What is "High Quality" High Quality is a new company that is about to take over the fitness world. We make products that will allow you to be in the best health as possible. We encourage people who use our products to be consistent with their work so that they can see their growth over time . Logo Brand Development Magazine Ad This is our Logo as well as our slogan " Feel the Burn".