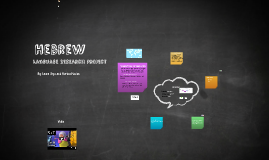 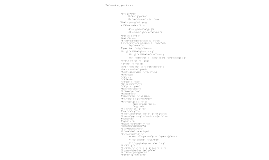 Transcript: -Your right hand, Yahweh, will smash the enemy. They went down in the depths like a stone. And He became salvation for me. Yahweh is my strength and my song. I shall pour out my sword. And the choice of his charioteers were sunk in the sea of Reeds. I shall overtake. I will sing to Yahweh -Until your people went through, Yahweh. Yahweh will reign forever and ever. אָשִׁירָה לַֽיהוָה I shall pursue. You will send forth your Burning anger. -He threw the horse and its rider in the sea. Awesome praiseworthy actions. My throat shall be full of them. All those who dwell in canaan dispared. You shall plant them on the mountain you cause them to inherit. You escorted by your strength to the settlement of your holiness. Yahweh is a man of Battle. -Until this people who you accuired went through. Streams remained standing as a dam. You lead this people who you redeemed in your loving kindness. Horror and dread fell upon them. Who is like you, glorious in holiness. The Enemy said Your right hand, Yahweh, glorious in strength. -For He is highly exhalted The sea covered them. They shall tremble. My hand shall disposses them. אָשִׁירָה לַֽיהוָה You blew with your breath. Your hands set up a holy place, Lord. -On account of the greatness of your arm they were ridgid as stone. Fear griped those who dwell in Philistia. -And in the wealth of your eminence you tear down those who stand against you. You prepaired a place for your dwelling, Yahweh. The people heard. The earth shall engulf them. -Depths covered them. Doing miracles. Rams of Moab, fear siezed them. And with the blast of your nostrils the waters were piled up. You shall bring them in. The depths were congealed in the heart of the sea. They sank like lead in the mighty waters. Yahweh is His name. -This is my God and I will glorify Him. Exodus 15. 1-18; conjugation alternation Who is like you among the Gods Yahweh? Then the chiefs of Edom were horrified. You stretched out your right hand. I shall apportion the spoil. It will devour them like straw. -[This is] God of my father and I will exhalt Him. He threw Pharoah's warchariot and army into the sea. 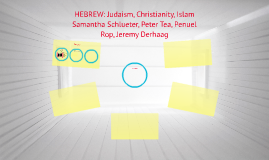 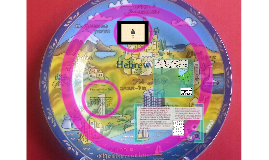 Transcript: Kosher dietary laws are observed all year round, not only during the Passover. The Jews have a very high dietary rule, that they have to follow. The rich history of Judaism gives the Western world it's shape today. The ten commandments were not made to the Jewish people, the equality of Western law would be replaced by position, power, or money. Judaism believes in the equality of all people. Judaism is the monotheistic religion of the Jews, tracing its origins to Abraham having its spiritual and ethical principles embodied chiefly in the Hebrew Scriptures in the Talmud. Hebrew is a member of the Canaanite group of Semitic languages. This language was from the early Jews, but from 586 BC it started to be replaced by Aramaic. What Happened to this Culture? The Hebrews are now called Israelites, that are still alive today. They might not be as active in their region as they were back then, but they do exist. Since they are scattered throughout he world, it is difficult to have an accurate estimate of how many Israelites (real) that are living at this time. They've estimated that there is between six and seven hundred million. Hebrew The history of Hebrews started in Mesopotamia, in the cities of Ur in the South and Haran in the North. The Hebrews created their own nation, also known as Egypt. "Hebrew." Language, Alphabet and Pronunciation. N.p., n.d. Web. 01 Oct. 2013. "Judaism 101: Kashrut: Jewish Dietary Laws." Judaism 101: Kashrut: Jewish Dietary Laws. N.p., n.d. Web. 01 Oct. 2013. "The Land of the Hebrews." The Land of the Hebrews. N.p., n.d. Web. 01 Oct. 2013. Map of Israel. Digital image. N.p., n.d. Web. 1 Oct. 2013. "What Is the Impact of Judaism on Todays Modern World?" WikiAnswers. Answers, n.d. Web. 01 Oct. 2013. Work Cited Where did Hebrew People Start? Impact on my Culture Aspects of this Culture 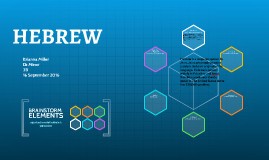 Transcript: Brianna Miller Dr.Minor 3B 16 September 2016 The Hebrew language dates all the way back to biblical times. Some believe that Hebrew was the first language, because the Adams children's names Hebrew. Most Hebrews don't call the language Hebrew but they will call it " The Language of Judah". copy and paste as needed to add notes to your brainstorm BRAINSTORM HEBREW ELEMENTS Hebrew is a language spoken by Jews. Jews are people practice judaism. Judaism originated the language. Hebrew is spoken widely in Palestine and Isreal. 5 million people worldwide speak it. The United States alone has 220,000 speakers. Associate it What does the subject make you think of? Apply it Describe the subject's uses. Describe it Examine the subject closely and describe what you see. Use any reasoning to argue for or against the subject. Argue For or Against It Analyze it Break the subject into parts. Tell how it is made. Compare it What is it similar to? What is it different from? 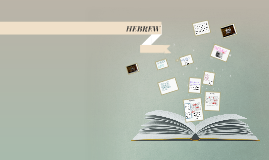 Transcript: is a West Semitic language of the Afroasiatic language family. Historically, it is regarded as the language of the Hebrew Israelites and their ancestors, although the language was not referred to by the name Hebrew in the Tanakh The name In the old time writing run from right to left. If we assume that a right-handed scribe made those inscriptions in stone, he would be holding the chisel in his left hand, hitting it with the hammer in his right hand. His script would, logically, go right to left. Four elements distinguish the Hebrew alphabet from others. First, Hebrew is written from right to left. The modern word "Hebrew" is derived from the word "Ibri" (plural "Ibrim"), one of several names for the Jewish people. It is traditionally understood to be an adjective based on the name of Abraham's ancestor, Eber ("Ebr" עבר in Hebrew),. This name is possibly based upon the root "ʕ-b-r" (עבר) meaning "to cross over". Interpretations of the term "ʕibrim" link it to this verb; cross over and homiletical or the people who crossed over the river Euphrates. it is also called the "Language of Canaan" HEBREW Lastly, there is a text universally accepted by Western and Eastern cultures. It is the Old Testament. The five books of Moses describe, in Hebrew, the creation of the world by God and the early history of the nation that evolved from the Hebrews into the Israelites and the Jews. Third, the names of the Hebrew letters have meaning in the Hebrew language. That doesn't actually matter when writing or reading, but it is nice to know. When etching with a stick on tablets of wet clay, going from right to left would make the right-handed scribe smudge the text he had just painstakingly inscribed. Logically then, a right-handed writer would change direction and the text would run from left to right. Second, many alphabets are made up of consonants and vowels. The Hebrew alphabet consists of 22 consonants ("vowels," really diacritical signs that don't appear at all in modern Hebrew texts such as books, are a later addition.) If indeed it was due to change in writing materials, with parchment becoming the norm, why didn't Hebrew script follow suit? Maybe it was because the Hebrew script was used to write down holy words, chisel on stone, right to left, and those were not to be meddled with, whereas the Greek wasn't considered sacred. HEBREW 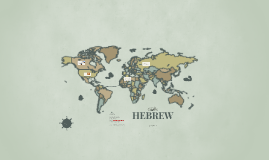 Transcript: Exodus 19-20 7-day week Responsibility of teach Right to recourse to the court Genesis 49 Places HEBREW GROUP #3 MICHAEL WONG VIAN FENG ANA PALACIOS CARRERA YUEN BRUCE NG 10B FRIDAY 8 MAY, 2015 CULTURE HISTORY PHILOSOPHY EDUCATION AND POLITICS the land of Canaan, Egypt, Mount Sinai Genesis 12: 1-3 “Leave your country, and your relatives, and your father’s house, and go to the land that I will show you. I will make of you a great nation. I will bless you and make your name great. You will be a blessing. I will bless those who bless you, and I will curse him who curses you. All the families of the earth will be blessed through you.” Abraham Moises David Solomon Judges Historical Impact God punished the Hebrews with 40 years of wandering, God abandon many times the Hebrews for disobeying God’s word until they whipped for God’s help. Persons