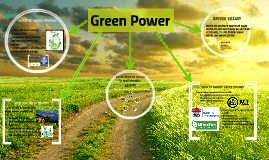 Transcript: SAVING ENERGY Hydro power Hydro-power is power made from the energy of falling or running water and is turned into electricity. The Benefits of Green Power The two Primary sources that are used are biomass and solar power. Solar power is the conversion of sunlight into electricity using solar panels. Biomass Power www.greenpoweremc.com www.greenpower.gov.au apps3.eere.energy.gov/greenpower/buying BOOK-Green Power:The successful way of A.G.GATSON Green Power Switch off lighting in unoccupied rooms Switch off appliances which are not in use at the wall, to save standby power Install low-energy lighting If you decide to purchase a green power product you would: Support increased development of reuale sources Reduce the burning of fossil fuels such as; Coal, Oil, and Natural Gases. Solar Power Geothermal power What is Green Power? Why buy Green Power? Department of Energy and water supply Department of Manufacturing,Innovation, Trade,Resources and energy Public Utilities,Office,Department of Finance Wind Power -Reducing your household greenhouse emissions by 50% by switching 100% Green Power. -Helping reduce water consumption as renewable energy generators. -Uses less water than coal and gas powered stations. Green Power representatives include: Act Government-Environment Sustainable Development Directorate NSW Trade & Investment -Green Power is energy produced by environmentally friendly sources and renewing energy. -Green power is also known as Sustainable energy Wind power is the conversion of wind using wind turbines and converting it to electrical energy. Research There are five main sources of green power; Who is behind Green Power? Green Power's energy is from natural sources It is thermal energy taken from the earth's heat and is pumped into homes for warming up or can be turned into electricity. Biomass is a biological material taken from living, or recently living organisms and turned into a substance called bio fuel. 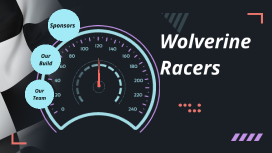 Transcript: Wolverine Racers Our Team #411 Members Team Members Team Leaders Jamier D. James C. Safety Manager JoeVante R. Public relation Managers Jamier D. Christian R. Materials manager Christian R. James C. Data Manager Nate C. Brian F. Build Team Leader Ian S. James S3. Pit Crew Brian F. Dylan B. Greg S. Driving Team Ian S. Marckez C. Jasiah S. Fundraisers Fundraising Car Wash-We plan on texting,emailing,and calling people about a car wash we are doing as well as word of mouth. Double Good Popcorn-We will send out a text message asking if they want to buy popcorn and 50% of proceeds come to us. We did a spirit night at Chicken Salad Chick and brought in $112.27. -We set our budget at $5,000- Team Goals Team Goals Place top 3 in a race Teamwork and build sportsmanship Build Engineering experience Our Build Green power Experience Our struggles - - - - - - - - - We had a lot of issues when it came to our wiring.We had to replace a wire because it burned out while we were practicing. Brakes were the hardest part of our car.If the breaks were too loose we could not stop. If we had them too tight we wouldn't go fast.Through trial and error we overcame this obstacle. We bought a new set of tires to complement the way our brakes were set up.We were burning the threads off too quickly. We practiced and worked on our build every day at 12-12:40 and set up race courses every week to help us learn to overcome these struggles. Our Body We built a Covid-19 frame and took it back down and re-did this process multiple times until we got the body presentable. We decided coroplast would be the best material to use for our body because its flexible,lightweight,and easy to paint.It also helped us build a cone that helped with our aerodynamics We found ways to take stripped screws and broken screws out of our body and buy replacements. We had to move our horn because every time we took our hand off the wheel, it would shake and we would have to slow down, therefore, we drilled a hole in the bottom of our steering wheel to limit the movement of our hands off time. What we've learned Most of us learned how to use multiple tools in many ways and how to identify them. We learned how to use wires, their functions, how to connect them with colors, as well as wire safety. We have had many deadlines, therefore we had to learn to work together quickly and efficiently under pressure. Sponsors Rosalind Alston Neal Phillips Roland Abbot and DeZoort insurance, LLC Mike&Jar Angstadt Shelia Scales Jennifer&Shawa DB Process Server Dan&Nan Durand The Mind Clothing Beth Vaughan Margaret Rogers Stockyard Ramon Allen Maven League Realty Melinda Sams O'Reilly Auto Kenya Ellington Designer Touch II Personalized Products, LLC Sheri Cody Mary Phillips Jennifer Gibbons Linda Finley Hart to Hart Troup Hauling Not Another Smoothie Sherry Easter Cool B Wing Sauce C&L Cleaning Service L.Beasley Trucking 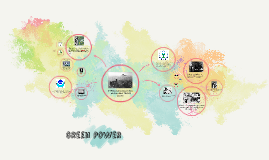 Transcript: Green Power In 1953, severe smog in New York City killed 170-260 people. In 1965, congress passed a law allowing the government to control car emission levels. After the war, the movement got more attention from the communities. Gaylord Nelson hired many people to hold "teach-ins". The stage was set for change by the publication of Rachel Carson's New York Times bestseller Silent Spring in 1962. Concerns over air and water pollution helped to spawn the environmental movement in the 1960s. Also in 1965, Congress passed the Water Quality Act. Nixon created the Environmental Protection Agency (EPA), he also signed the National Environmental Policy Act, or NEPA, which required environmental impact assessments for all large-scale federal projects. "Our goal is an environment of decency, quality, and mutual respect for all other human creatures and for all living creatures." - Gaylord Nelson Modern Environmental Movement: In 1969, an oil well off the coast of Santa Barbara, California spilled 200,000 gallons of oil into the ocean. Five million American households contribute to national environmental organizations, which together receive over $350 million in contributions from all sources. Most of the environmental movement was overlooked until the United States was pulled out of Vietnam. The meeting agreed upon a Declaration containing 26 principles concerning the environment and development; an Action Plan with 109 recommendations, and a Resolution Global warming has become a problem, but many people continue to ignore the environmental issues. In 1969, one of Ohio's river burst into flame because of the pollution in the river. On Christmas Eve of 1968, NASA astronaut William Anders, while orbiting the moon with the Apollo 8 mission, snapped a photograph that many people credit with providing a foundation for the modern green movement. Many people became worried about the air being breathable. April 22, 1970 The first national Earth Day. It took the form of a nationwide protest against environmental ignorance. The Sierra Club was able to prevent the damming of the Grand Canyon. After the first Earth Day landmark environmental legislation, like the Clean Water Act, were signed into law. DDT was finally banned in 1972. 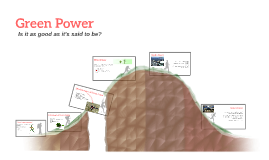 Transcript: Hydro Power Wind Power What is green power? Disadvantages of Green Power Solar Power It's the cleanest renewable energy source Provides about 20 % of the world's electricity It's the main energy source for more than 30 countries. Sustainable Cost efficient ( pays for itself over time) Creates no pollutants Safe Green Power Wind power is one of the most commonly used forms of power in the U.K 5,276 wind turbines 6th largest producer of wind power A single wind turbine can power 500 homes. Green power is a form of energy that is "endlessly" sustainable. Examples of Green power: Wind Solar Hydro Geothermal Is it as good as it's said to be? Advantages of Green Power Expensive ( to setup) Unattractive takes up a lot of space 573,000 birds a year are killed by wind farms Solar power is one of very few sources of energy that are completely free. Every hour the sun beams onto Earth more than enough energy to satisfy global energy needs for an entire year Once installed, the energy is free. 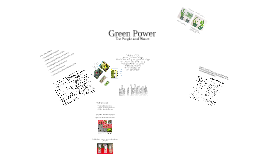 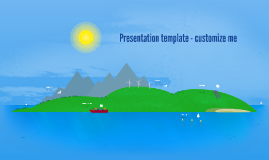