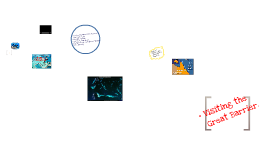 Transcript: By: Dana N. Morgan S. Jeremy A. Location Off the coast of Queensland Australia. Visiting the Great Barrier. Geograpgy of The Great Barrier reef It's the only living thing that can be seen from space. Has 900+ islands. It is in shallow water. World's largest reef system. 300,000 km (1,800 mi.) Great Barrier Reef. 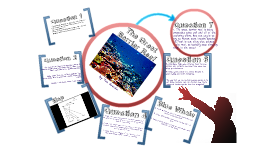 Transcript: Question 4 Blue Whale Map Question 1 The Great Barrier Reef is an ecosystem because it contains specific plants and animals that my differ from other reefs. Also it is a specific ecosystem. Biotic: Whale Shark, Corral, Clams, Mollusks, Tiger Sharks, Manta Rays, Cardinal Fish, Firefish, Gobies, Blue Tuskfish. Aibiotic: Trash, Boats, Water, Sand, Sunlight Question 6 The difference between an ecosystem and a biome is that an ecosystem contains all the plants. animals, and micro-organisms. where as a biome are groups of ecosystems that are geographically and environmentally similar The Carribean Tube worm attaches itself to hard surfaces such as boats and slows them down and brings up maintenance The way that we can controll invasive species is to not bring creatures here for starters and try to remove all invasive species from the ecosystem. The Asian green muscle is a threat because it grows rapidly and covers everything. Question 7 A. If krill started to die off it would remove the food source for the blue whale B. Water, Krill, Sunlight, food source for the krill, and space C. Stopping Whale hunting and try to avoid polution that kills krill and blue whales. Question 2 By: Tom Girardin The Great Barrier Reef 1. People that drive boats around the great barrier reef are poluting the water around it and the air by burning fuels on their boats. 2. People that dump trash into the ocean in and around the great barrier reef causes polution which causes fish and the plants to die. 3. Illegal fishing and trapping of the fish and other creatures causes a slight decline in numbers. 1. The great barrier reef is being protected quite well with all of the authority there. But one way is to try to remove some invasive species. 2.Trash is one thing that polutes the reef, so basically stop throwing trash in the ocean! 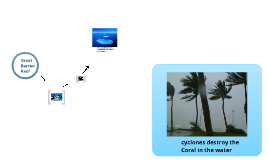 Transcript: cyclones destroy the Coral in the water Look at this great beauty but these creatures are destroying our Coral Reef The Great Barrier Reef is so BEAUTIFUL you can see it from space l Great Barrier Reef 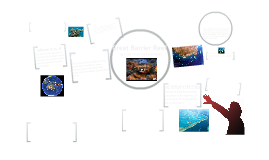 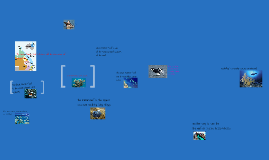 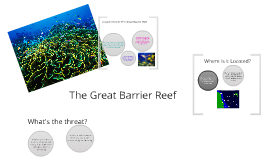 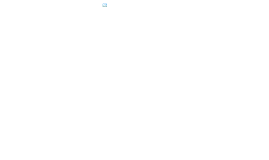 Transcript: TOURISIM! These 3 things are what create the foundation of my presentation to conclude, next time you go on holiday consider the great barrier reef because it is a beutiful calm place where there is alot to learn. Member The Great Barrier reef is the largest coral reef in the world, covering roughly 2,600 km over 900 beautiful isands. The Great Barrier Reef is composed of and built by billions of tiny organisms, known as coral polyps. an organism is any contiguous living system such as animals, fungus' or plants. The Great Barrier reef is a home to thirty diffrent species of whales and doplhins, also seventeen species of sea snakes and six diffrent species of sea turtles come to breed at the reef. the animals are gaurenteed to live happily due to their protection. Member Member THE GREAT BARRIER REEF Member GEOLOGY! TOURISIM HAS BECOME HUGE PART OF THE GREAT BARRIER REEF. BILLIONS OF DOLLARS ARE CONCIEVED YEARLY FROM TOURISTS. AFRAID TO HAVE PUT THIS BEAUTIFUL CREATION OF NATURE IN JEOPARDY A LARGE PART OF THE REEF IS PROTECTED BY "THE GREAT BARRIER REEF MARINE PARK" TO UNSURE THE LEVEL OF HUMAN IMPACT IS MINIMIZED. MARINE LIFE! 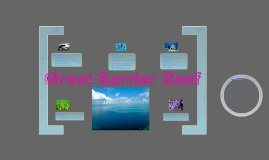 Transcript: Located in the Coral Sea, off of the coast of Queensland in north-east Australia. The Mesoamerican Barrier Reef-Isla Convoy at the tip of the Yucatán Peninsula down to the Bay Islands of Honduras The New Caledonia Barrier Reef—new caledonia south pacific The Andros, Bahamas Barrier Reef— following the east coast of Andros Island, Bahamas, between Andros and Nassau The Red Sea—coastline a seawater inlet of the Indian Ocean, lying between Africa and Asia 68 Degrees in the winter, and up to 90 degrees in the summer 3.5% average salt concentration Nutrients- phosphorus & nitrogen kelp is becoming over abundant which can overrun coral eventually this will make the water less clear then it will kill the algae that grows on the coral and animals that live in the coral will slowly die because of not having enough nutrients The depth can range from 30-120 feet. Most of the nutrients entering the Great Barrier Reef comes from catchments in major pastoral areas like the Burdekin, Herbert and Fitzroy Rivers. Coastal catchments that provide a continuous flow of freshwater to the Reef from small catchments that support farming like the Tully River and Pioneer River Large catchments that drain large inland grazing areas and tend to be seasonal and influenced by flooding like the Fitzroy River. water in the great barrier reef is standing and flowing. nutrients circulate from floods and other different natural things By 2050, 95% of the coral could be gone. Coral reefs are fragile , they can die in temperature change and coral bleaching. Tourism also hurts the reefs. But for now it is the fastest growing and contains a lot of life. The reef serves as a protective habitat for many other forms of marine life. The outer edge of the reef receives the full force of breaking waves, protecting the inner Australian shore. The space between the shoreline and the inner edge of the reef acts as a kind of nursery for growing fish and other marine life. Also, the calcium carbonate in coral helps maintain the pH balance in the ocean needed to have life. Another thing is, medicine has also made important discoveries within coral reefs. Some hard coral is being experimented with as a possible bone replacement, and treatments for diseases such as cancer, AIDS, asthma, arthritis, and various infections have been developed from organisms in coral reefs. boat, fish, sail, dive, snorkel and swim Coral is a useful product Olive Ridley Sea Turtle (Lepidochelys olivacea) Habitat- bays and estuaries food chain- they are towards the top Biotic- boats, destruction of habitat, pollution Abiotic- sand, temperature, natural disasters Predators- whale, etc. Prey- different fish and algae Spinner Dolphin (Stenella Longirostris) Habitat- deep ocean Food chain- top of their food chain Biotic-smooth skin, human interaction, food Abiotic- water temp., surrounding environment, natural disasters Predators- sharks Prey- fish, jellyfish, squid, krill, etc. Dugongs (Dugon dugon) Habitat- shallow coastal waters Food Chain- in the middle Biotic- big, heavy, food Abiotic- population, slow moving, disasters of their habitat Predators- Killer whales, crocodiles, etc. Prey- seagrass Seagrass (Posidonisceae) Biotic- nutrients, sand, animals Abiotic- water current, temperature, light Coralline Algae (Corallina officinalis) Biotic- animals, nutrients, coral Abiotic- nutrients, water, temperature Sources 1. http://en.wikipedia.org/wiki/Great_Barrier_Reef - location 2. http://en.wikipedia.org/wiki/Coral_reef -major locations around world 3. http://www.great-barrier-reef.com/great-barrier-reef-weather.html - average temp. 4. http://toursholic.com/wp-content/uploads/2011/04/Great-Barrier-Reef-coral-outside.jpg -coral reef outside pic 5. http://upload.wikimedia.org/wikipedia/commons/thumb/1/1b/GreatBarrierReef-EO.JPG/230px-GreatBarrierReef-EO.JPG -sky pic 6. http://earthfirstnews.files.wordpress.com/2012/03/great_barrier_reef_biodiversity.jpg -fish pic 7. http://www.qm.qld.gov.au/microsites/biodiscovery/01environments/marine-habitats.html - salt concentration 8. http://sitemaker.umich.edu/gc2sec7labgroup3/pollution -nutrients 9. http://apbiogreatbarrierreef.wikispaces.com/Limiting+Factors –limiting nutrients 10. http://www.padi.com/scuba/scuba-diving-trips/scuba-diving-resort-vacations/australia-great-barrier-reef/ -water depth 11. http://www.gbrmpa.gov.au/outlook-for-the-reef/declining-water-quality -drainage 12. http://news.mongabay.com/2005/1117-corals.html -structure and growth 13. http://terrax.org/teacher/lessons/australia/reef/reeffacts.aspx -environmental values 14. http://images.nationalgeographic.com/wpf/media-live/photos/000/006/cache/ridley-sea-turtle_688_600x450.jpg -turtle pic 15. http://hawaiihumpbackwhale.noaa.gov/explore/images/AC_Spinner.jpg dolphin pic 16. http://earthtrust.org/wlcurric/dolphins.html -dolphin factors 17. http://www.spiderscore.com/images/Dugong2.jpg -dugong pic 18.