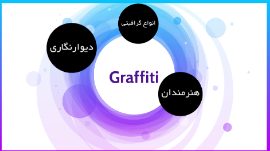 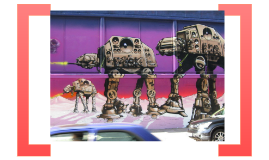 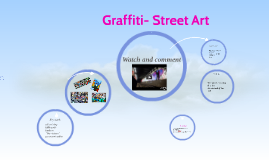 Transcript: Task 3: Pass over to "running dictation'; use handout of the text! advertising billboards buskers "live statues" pavement artists Key words Speaking tasks What did I learn? Watch and comment Make the summary of the video. Express your opinion about the theme Are graffiti artists tasteless comics? Is it really art? Is it Ghetto culutre? Mention some places of graffiti art in Latvia! Graffiti- Street Art 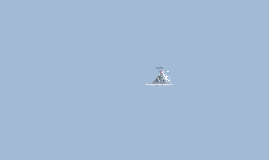 Transcript: By:- Aryan, Blesson, Vaishakh Thank you! There is a significant graffiti tradition in South America, especially in Brazil. Within Brazil, São Paulo is generally considered to be the current centre of inspiration for many graffiti artists worldwide Phase 1 GOAL! What is GRAFFITI ? Phase 3 Phase 2 Some Graffiti :- Graffiti is writing or drawings that have been scribbled, scratched, or sprayed illicitly on a wall or other surface, often in a public place. Graffiti ranges from simple written words to elaborate wall paintings, and it has existed since ancient times, with examples dating back to Ancient Egypt, Ancient Greece, and the Roman Empire. A GRAFFITI DONE BY OUR FRIEND VAISHAK......... GRAFFITI 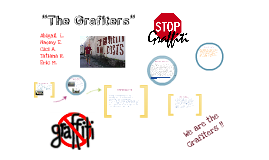 Transcript: We are the Grafiters !! After the research... <-- This will help our community in many different ways. *This will help us because the world will look much better. *This will also help us make our community look nicer. *We would also try to make the gangs stop by painting the graffiti and we want to see if gangs would stop to make this world a better place. * One of our goals is to make this world a better place, and not make tourists say "ewww this is not a place to stay." Our results... We will stop Graffiti because people or gangs spray paint on the walls. When people spray paint walls other people think it looks weird and people always complain to the city of Inglewood or any where around the world. We are going to try to stop the grafitti in the community. We will try our best to make the world look better. Photos of the graffiti and how we will change that. No we do not want people to think of Inglewood like this !! We did not exactly do alot of results but we noitcied that gangs arent really doing graffiti as they did back then. Once in a while they will probably stop or not. Some Gangs just want to look cool then other gangs and leave a sign saying this is there terrioty. We noticed that when the gaffiti the walls the city paints over them, and sometimes the gangs paints again or they just leave. We were expecting that we will at least stop some graffiti on the walls and gangs would stop too. Abigail L. Naomy E. Cici A. Tatiana R. Eric M. How will this Help... There are four major types of gfraffiti: Gang graffiti, often used by gangs to mark turf or convey threats of violence, and sometimes copycat graffiti, which mimics gang graffiti. Tagger Graffiti, ranging from high-volume simple hits to complex street art. Conventional Graffiti, often isolated or spontaneous acts of "youthful exuberance," but sometimes malicious or vindictive. Ideological Graffiti, such as political or hate graffiti, which conveys political messages or racial, religious or ethnic slurs.Taggers, Party Crews, and Car Clubs are nontraditional gangs. These type of groups are not documented as gangs unless they are involved in criminal activity. Car Clubs in San Antonio are not often documented as a gang. In other parts of the country, they have noted a trend for car clubs to operate like gangs. Taggers consider themselves to be street artists and not gang members. Some tagger graffiti may involve creative expression, providing a source of great pride in the creation of complex works of art. Most taggers seek notoriety and recognition of their graffiti, and attach status to having their work seen. Thus, prolonged visibility due to the sheer volume, scale and complexity of the graffiti, and placement of the graffiti in hard-to-reach places or in transit systems, enhance the vandal's satisfaction. Because recognition is important, the tagger tends to express the same motif-the graffiti's style and content are replicated over and over again, becoming the tagger's unique signature. Tagger graffiti is not usually used to mark territory like traditional gang graffiti. Tagging on walls is a competition to those involved. The more a person tags, the more recognition and respect they'll get from other taggers. Taggers are responsible for millions of dollars in damage to private and public property annually. Competition between tagging crews has often become violent. In some cities, tagging crews are now committing crimes like traditional gangs and are known as tag-bangers. http://stopmantecagangs.com/cms/index.php?option=com_content&view=article&id=60:not-all-graffiti-is-gang-related&catid=32:graffiti&Itemid=63 THIS IS OUR SOURCE O How this helped? "The Grafiters" WHAT WE WILL DO: This is how most places look like but we are going to change this to something more beautiful. We are gonna try are hardiest to make it look better than before. We are going to make it look better so our world won't get ugly and DIE! This helped by understanding the city of Inglewood and how we will stop graffiti . Some People will actually think more than what they are going to do next and not get in trouble. When people do something bad in there community it makes the community look scary and not a very good place to stay. 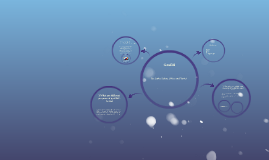 Transcript: 3.Which places are graffiti artists welcome to do Graffiti?-Silvia and sekou An area that graffiti is allowed is at Hosier Lane, Melbourne Australia another area is what if she did graffiti way back when Grafiti By: Layla, Sekou, Silvia, and Nantai 1970 graffiti Layla's parents Amy and Anthony thanks to... Ms.Beletti Mr.Brett Mr.Jordan Anthony[ Layla's dad] Amy [Layla's mom] Graffiti can have a purpose which is there feelings if they are sad they do something sad if they are mad they do something mad if they are happy they do something happy the do graffiti with there feelings Graffiti was a way to express but it was vandalism people did it on their property or they used other people’s property with/without permission human sources How has graffiti changed over time Graffiti has changed majorly since 1970 when graffiti was started In 1985 to 2000 it was a time period of graffiti starting to be more of expression and vandalism In 2000 to 2016 it is a very popular way of expression and a popular way of vandalism Graffiti has changed a lot since 1970-2016 http://www.widewalls.ch/how-much-have-graffiti-changed/ sources 1.How has graffiti changed over time?-Layla 2.What are different purposes of graffiti?-Nantai 3.Which places are graffiti artists welcome to do Graffiti?-Silvia and sekou 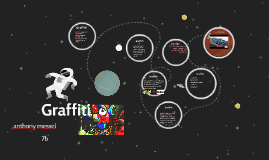 Transcript: anthony messel 7b way back long a go romans and greeks would use grafitti to tell storys, but not what you are thinking. They used sharp sticks and carved in to the wall. Today graffitti is a lot different. Grafitti today is consisting of a lot of bubble words and creatures the the artist can make up in his mind. Graffiti Graffiti Graffiti Invader Graffiti Graffiti has a very long history, it was started in early 1960s. in my opinion graffiti is the best because it is seems to be very creative my favorite quote is by invader- evrything is somthing but nothing is not somthing Grafitti is a type of Art that is mostly performed illegally. normally called vandelism. people tend to put on trains or towers. Graffiti Graffiti-video Graffiti lady pink crash and daze taki183 mitch77 == Grafitti