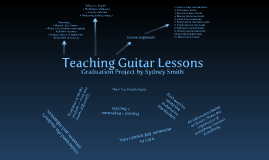 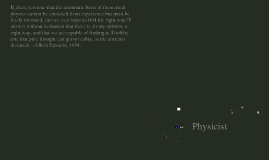 Transcript: Physicist Why Choose a career in physics? I have: --A passion for mathematics --An inexplicable drive to understand how the universe works --An ability to imagine systems under many different parameters The million dollar questions: What is Physics, and what does a Physicist do? What is the demand and how did it all begin? Then, Physics becomes more of a professional career... Newton's Accomplishments: --Essentially turned physics into a profession --Wrote his immortal Law of Gravitation --Invented Calculus --Wrote several grounbreaking papers on optics ............ Physics reamined about the same for the next 300 years. There was slight growth, but no real advancements were made until.... Now, Physics evolved unlike it had in 3 centuries, since Newton. It is easy to see that discoveries within the science bring demand for people who can work with and refine a brilliant theory. You almost never know when a breakthrough will happen. Today's growth is based on breakthroughs that occurred half a century ago Growth Rates From 2006-16, careers in physics grow 14-16% nationally, with 6900 new positions available. In PA, physics grows 10% and 120 new positions will be available. More Statistics 52% of physicists have a Ph.D. (or multiple) or a Professional degree. Average PA physicist makes around $106,390 The national average is $112,230 Job Shadow I was given the opprotunity, on April 18, interview and observe the duties of a professional physicist at Drexel University. I shadowed Robert Gilmore, a research physicist and Professor at Drexel. He was a brilliant man, and a very serious researcher who has held positions at Trinity College Dublin and the University of Paris. After preliminary questions (provided by the Twin Valley PPD class), i asked him several questions not only about physics as a career, but about physicists and physics as well. I observed him doing calculations to support a paper he had recently written, the abstract of which is: There is at present a doubly-discrete classication for strange attractors of low dimension, dL < 3. A branched manifold describes the stretching and squeezing processes that generate the strange attractor, and a basis set of orbits describes the complete set of unstable periodic orbits in the attractor. To this we add a third discrete classication level. Strange attractors are organized by the boundary of an open set surrounding their branched manifold. The boundary is a torus with g holes that is dressed by a surface flow with 2(g-1) singular points. All known strange attractors in R3 are classied by genus, g, and flow type. In layman's terms, he works in chaos: the study of systems falling out of order. Gilmore tries to find order within chaos. From Gilmore, i gained the most valuable information from any of my research for becoming a physicist. Most importantly, however, i was given the gift of the time and patience of a brilliant professional physicist. I will never forget my experience. To Summarize: Careers in physics are enlightening and show extreme promise. In PA, it will grow about 10%, still higher than average. The more scientific discoveries, the faster physics grows not only as a science, but as a career as well. The average salaries in PA and Nationally are $106,390 and $112,230, respectively. Nationally, physics will grow about 15% over 2006-16, which is higher than average. If, then, it is true that the axiomatic basis of theoretical physics cannot be extracted from experience but must be freely invented, can we ever hope to find the right way? I answer without hesitation that there is, in my opinion, a right way, and that we are capable of finding it. I hold it true that pure thought can grasp reality, as the ancients dreamed. --Albert Einstein, 1954. Democritus, 400 BC 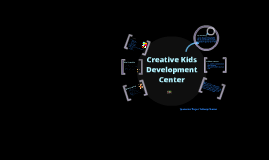 Transcript: Creative Kids Development Center Graduation Project-Katharyn Bannar I was unable to work with children one on one or by myself Finding time to volunteer when Track started working with kids hands-on activities story time projects/learning writing lesson plans cooking breakfast and lunch for children and staff working in the office filing papers scheduling staff Helped me realize what it's like in a professional setting A better concept of what goes into childcare Taught me a lot about how to stick with commitments If they needed me to come in and help out, I had to be there Tasks: What I learned: I love working with children It was close to home, so i could walk there to get my hours in I've volunteered there in the past My mom works in the same building Already knew owners through her Why I chose this: I loved my experience working at Creative Kids South. Because of volunteering there, they decided to hire me part time over the summer to help out with cooking because I am not old enough to work directly with kids. Thank you for your time! Speech Pathology Problems I Ran Into: I am so glad I chose to do this for my graduation project because it made me realize what I would like to study in college. Being able to work with children who have special needs or speech impediments taught me a lot about the need for this profession in many different settings, including day cares. 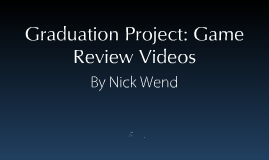 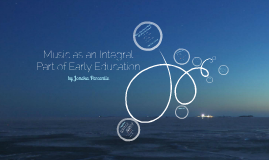 Transcript: Parallel in Curriculum Parallel in Curriculum Cognitive Eat Your Vegetables Song Clip Students that began studying music at an early age have been found to be more developed in retention of knowledge and reasoning (Mastro). Music as an Integral Part of Early Education Interpersonal Instrument Flashcard Game Parallel in Curriculum Musical Freeze Tag Music's Pervasiveness Vitalizes Childhood Development Volunteer with Music Mentoring program NWSA's Ensemble Workshop Program Music mentoring between middle and high school students Music Theory Game Fundamental motor patterns emerge before the age of five and are stabilized afterward. summer childcare facility beginning new music program minor setback Music Alive Curriculum Cognitive skills include critical thinking abilities, processing information, and the ability to differentiate sounds and images. The study of music develops strong social interaction skills by concepts of teamwork and commitment (Mastro). Cognitive Skills Kinetic/Motor Skills Spatial Skills Interpersonal Skills Guided Music Exploration with Peers Motor/Kinetic Skills by Joneka Percentie Song Clips "Teachers and researchers have found that development through early music education can be attributed to the partnership between the young child and his or her significant others." (Levinowitz) Motor skills involve the recruitment of of both cognitive and physical processes in order to efficiently accomplish tasks. Your Destiny Summer Program We are surrounded by music from the moment we're born. Utilizing this vital component in our lives is not only enjoyable but aids in the important development of young children. Singing Story Circle 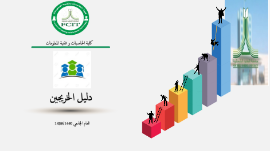 Transcript: The Beginning Describe a success story 01 No Return The only way is up! 02 Dream Big Make it happen! 03 Teamwork Find a partner 04 Reach the Top Whatever it takes 05 Success You made it! 06 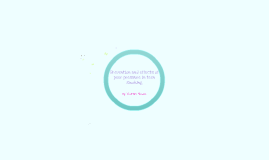 Transcript: Prevention and effects of peer pressure in teen smoking What I learned... Different causes that lead to teen smoking Health effects Methods of prevention By: Valentina Naveiro Prezi, tri-fold Prevention and awareness of teen smoking to a target audience Amplified researching, socializing and presentation skills. Overall learning Planning ahead Relating and interacting with different age groups Correlation between research and conducted survey THANK YOU FOR YOUR TIME! Availability of information Willingness of people around me Once on track, maintaining a steady work schedule Are there any questions? Our last Christmas, 2011 Christmas 2003 Product My uncle, Fonz The not-so-good: Success vs. Failure Scheduling Getting on track The good: 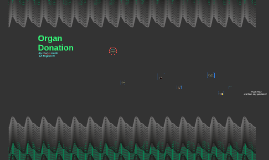