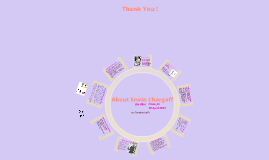 Transcript: Thank You ! In the base composition of DNA, the quantity of adenine equales the quantity of thymine; the quantity of guanine equales the quantity of cytosine Erwin Chargaff Most Known: Occupation: Birthday: On Traveller's Gift 11 August 1905 His Researches Includes... Bio Blue The basic rules of DNA DNA’s base composition the ratio of purines to pyrimidines DNA function and structure Chargaff's Rules Chargaff's findings, along with those of Rosalind Franklin's X-ray diffraction studies of DNA, strongly suggested that base-pairing existed within DNA between A and T, and between G and C. Two years later, he explained these findings to James Watson and Francis Crick, who were then able quickly to elucidate the double-helix structure of DNA. Not much luck... 1905-2002 Chernivtsi- Turning Point in His Life A city in Austria-Hungary In my opinion, the eighth decision would be: Travel ten thousand miles. It means you should travel and see things throughout the world. In this way, you can have more experience, and you can stay calm in all situations. Also, you can get in touch with more people, which helps you consummate your ideas. Erwin Chargaff The Eighth Decision: After being in Paris for a little while, Chargaff found a research position at Columbia University’s Department of Medicine He remained there for the rest of his career 1940: He became a U.S. citizen Austrian-American Nationality: 1933: He was about to receive Habilitationschrift, a formal condition for becoming a university professor; Due to the rise of Nazi's power, he was considered from a a family of Austrian Empire Jews He left Berlin Chargaff's Rule (By 1950) Chargaff's Rules About Erwin Chargaff 1928: received a doctorate-- Vienna University of Technology (analytical chemistry) 1928~1930: postdoctoral research--Yale University (bacterial chemistry) 1930~1933: a privatdozent, or occupant of the first ladder in a professorial career--University of Berlin’s Department of Public Health Chargaff was invited to work at the Pasteur Institute in Paris Albert Calmette used Chargaff to help himself out of the responsibility of contaminating the Bacille Calmette-Guerin vaccines (Calmette was the inventor of the vaccine) After 2 years, he left again with the flow of the refugees from the Germans Settling in America Birth Place: Biochemist Education Background Time period: Casie Jin 19 April 2012 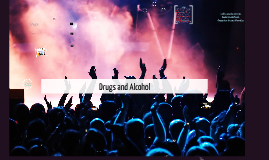 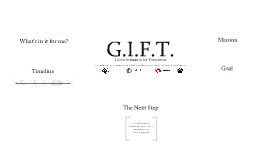 Transcript: Mission GIFT's mission is to maximize public and private resources to foster job creation and entrepreneurship in green initiatives. Goal For all commerical, industrial, and residental buildings in the Cedar Valley to be maximally energy efficient. What's in it for me? Input into training & certification offered by GIFT More qualified applicants More capable employees Broad expansion of markets and customers Timeline Safety training provided by OT is PAID training at $20/hour for up to 80 hours per person; OJT is paid training at Davis-Bacon The Next Step Eight Hours Asbestos, 10-30 Hours OSHA, Three Weeks Advanced Weatherization OJT Green Iowa AmeriCorps - Iowans for Social & Economic Development - Operation Threshold - City of Waterloo Eight hours 30 Days Brainstorm groups or people who would be interested in what we have 30 days First stakeholder meeting is July 12 at 6:30pm Up and running within 30 days -SKIP- Green Initiatives for Tomorrow Asbestos, OSHA, and OJT Taken at the same time -or- Taken in sequence Six months 40 Hours Discuss what you're looking for in certifications Classroom Session Ready to work in as much as six months Lead Abatement Energy Assessment & Basic Weatherization G.I.F.T. 10 Weeks Fast Track Slow Track Eight Hours Asbestos, 10-30 Hours OSHA, Advanced Weatherization OJT Participate in monthly stakeholder meetings Ready to go! Microenterprise Development