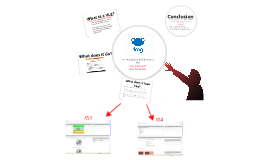 Transcript: An introduction to High Arcal's VLE VLE stands for Virtual Learning Envrioment FROG enables students to interact with their curriculum content FROG VLE is different to online tutorial sites such as BBC bitesize, as it is tailored to the student’s requirements What does it do? What does it look like? Key Stage 3 & 4 have a different 'look and feel' Each Key Stage has its own identity so students instantly know what lessons they are looking at. Each lesson shares common layout and functionality which helps progression from KS3 to KS4. Conclusion Lessons are produced and delivered by FROG and this content can be accessed by our students 24/7. What is a VLE? KS3 Increased interest in subject Greater uptake of homework tasks Students appear to make better progress… The Faculty of ICT Brad Carwardine As a result: KS4 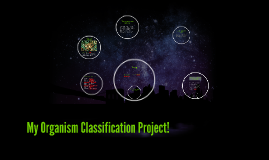 Transcript: Classification The Organisms Habitat What does it eat? Frog My Organism Classification Project! Scientific Names:Rana pipiens Frogs eat insects, such as damselflies, but they have been found to eat worms, snails,and slugs Same Order: Toad(Bufo bufo) Same Class: Bull Frog(Rana catesbeiana) What is its role in the world or ecosystem? Interesting Facts & Url The female frog can lie between 645 and 7,648 eggs per egg cluster, which are around the size of a grapefruit http://bioweb.uwlax.edu/bio203/s2007/mandli_jord/classification.htm Domain - Eukarya Kingdom - Animalia Phylum - Chordata SubPhylum - Verebrata Class - Amphibian Order - Anura SubOrder - Neobatrachia Family - Ranidae Genus - Rana Species - Rana pipiens Picture of organism Frogs can act as both the predator and the prey for other animals.Their prey consists of insects, such as damselflies, but they have been found to eat worms, snails, slugs, and smaller frogs. Their predators may include bullfrogs, heron, large salamanders, fish, minks, raccoons, skunks, and hawks. Also They have a negative role in which the carry Bateria infections. How do it( the organism) reproduce? Some frogs live in fresh water environments include lakes, ponds, beaver ponds, reservoirs, marshes, springs, bogs, flood plains, canals, and slow streams such as creeks. Egg fertilization happens outside the female's body.The female releases her egg and the male releases his sperm at the same time using a posture called amplexus. One other organism that's in the same order and one in the same class. 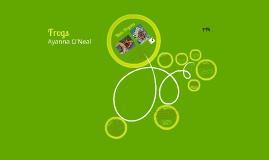 Transcript: Frogs Ayanna O'Neal - Lungs - Kidneys (under is the gallbladder) - Heart - Digestive Track (Stomach, large and small intestine) - Waste sack - liver Well the stomach's lining is more acidic. Its basically a mucus covering from you're stomach with acid burning ulcers into your stomach. Small intestine on the other hand has a thinner lining, because there's not really that many acids, so the lining is more neutral. ~ The ventricles are the lower chambers of the heart which pump blood around the body. They require more muscular walls to enable them to have enough power to pump the blood around the body effectively. The atria are the upper chambers in the heart and squeeze the blood returning from the lungs and body into the ventricles. Because this is such a short distance, they require a lot less strength to be able to do there job effectively than the ventricles do. The left ventricle has an even more muscular wall than the right ventricle. ~ The circulatory system and the respiratory system work closely together to ensure that organ tissues receive enough oxygen. Oxygen is required for cellular functions. The air breathed in and held in the lungs is transferred to the blood. The blood is circulated by the heart, which pumps the oxygenated blood from the lungs to the body. ~ The urinary system is also closely related to the circulatory system by virtue of the processes of cleansing the blood of waste,the kidneys cleanse the blood of this waste and turns it into urine. Removing excess fluids and generally keeping other fluids in balance. FIN How many lobes does a frog's liver have? How does it compare to a human liver? What is the function of the villi? How long is the digestive track of your frog? ~ It absorbs nutrients in the food Questions Explain the connection between the circulatory system and the urinary system. More...... Explain why ventricle walls in the heart have a thicker muscle wall than atria (think about their function). ~ Primarily the lining of the small intestine - along with the villi, which creates a larger surface area - are responsible for absorption of processed chyme (water, and nutrients) to be transferred to the circulatory system. ~ 3, and it smaller compared to human's cause we have 4. ~ There exist similarities between a frog and human being's digestive system. Just like humans, digestion for a frog begins at the mouth. Food passes down the frog's mouth through the esophagus and a frog also has a gall bladder. Were both animals and need food to survive. Male Organs More...... ~ About 4 inches What are the similarities between frogs and humans. More..... Explain the connection between the circulatory system and the respiratory system. Explain the connection between the digestive system and the circulatory system. How does the lining of the stomach compare to the lining of the small intestine? Explain the reason for this difference/similarity. More Questions ~ About 4 inches ~ Last more..... 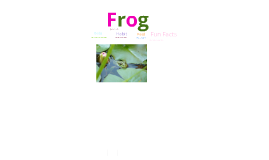 Transcript: Body They can be Green and blue! Habit They live nere water. Food They eat flys! Fun Facts They can be manny colors Frog By:Mckenzie 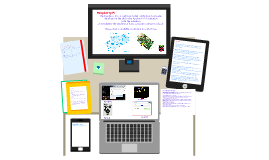 Transcript: The Raspberry Programming Competition Students and computer programmers at UK schools and universities were asked by PA Consulting Group and the Raspberry Pi Foundation to invent something using a Raspberry Pi that will make the world a better place. Some examples of the kinds of things that entrants might focus on: Helping others reduce their impact on the environment Reimagining how people receive healthcare in the community Making it easier for people to work with ‘big data’ Protecting IT systems from malware and malicious hackers. The Competition is Open to Five Categories: Primary school Years 4 - 6: ages eight - 11 Entries in this category should be driven by teachers and/or interested parents. Teams should comprise up to six entrants and at least one adult mentor. Secondary school Years 7 - 11: ages 12 - 16 Entries in this category can be driven by teachers, interested parents, scout leaders and young enthusiasts. Teams can comprise up to six entrants and at least one adult mentor. Secondary school Years 12 - 13: ages 16 - 18 Entries in this category can be submitted either by teams of children or by adults organising activities at schools and after-school clubs. Teams can comprise up to six entrants and should include at least one member over 18. Higher education – undergraduates Entries should be submitted by individual teams, not by universities or colleges. Teams can comprise up to two entrants. Open category – open to all programmers and those who want to learn Entries should be submitted by individual teams. Teams can comprise up to two entrants. The prizes Categories 1 - 3 Winners in the first three categories receive £1,000 per team. Category 4 One team-member from the winning team in category four will receive a salaried internship at PA (subject to interview) or a cash prize. Category 5 Winners in the open category will receive £1,000 per team. All winners All winners will receive a guided tour of our world-leading technology centre in Cambridge, where we develop inspiring and award-winning products, automation and manufacturing processes.All winnners will also get a custom-made Raspberry Pi case lovingly engineered by our technology team. Winners Software that turns a Raspberry Pi computer into a time-lapse camera has won a contest for teenage programmers. PySnap was written by 12-year-old Aaron Hill and took first prize in the 13 and under category of the Raspberry Pi summer coding contest. The software allows Pi owners to connect a USB camera to the device and fine-tune the interval at which it takes pictures. For his coding prowess Aaron wins a cash prize of $1,000 (£627). Runners up prizes of $200 (£125) went to two other programs; SerPint, by Louis Goessling, aged 11, made it easier to control more devices via the Pi The Matrix by Conner Foxley, also 12, was a text-based world simulator. The four runners up in this category included a game called Neutron Craft by Bradley Pollard, aged 18 A web server called Pancake by Yussuf Khalil (15), a file synchroniser built by Hannes Westermann, also 17, called BerryBox and a music player called RasPod from 17-year-old Aneesh Dogra. neutron craft Raspberry Pi PySnap The Raspberry Pi is a credit-card-sized single-board computer developed in the UK by the Raspberry Pi Foundation with the intention of stimulating the teaching of basic computer science in schools. The product is available on amazon for only £37.95. Frog opportunity Frog plans to run competitions to recognizee and reward young programmers RasPod Berrybox 0 + - = 9 8 7 1 2 3 4 5 6 c 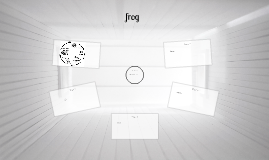 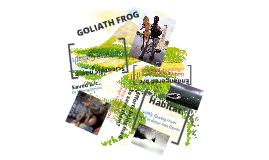 Transcript: GOLIATH FROG Conraua Goliath Endangered b/c.. Saved b/c.. Efforts being mad to save them? Swiftly flowing rivers and in dense rain forests Scientific name trying to hunt b/c it's a target for the pet trade Habitat destruction and collection for the pet trade Not harming humans Habitat