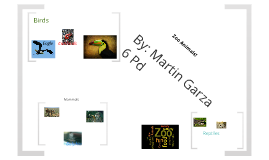 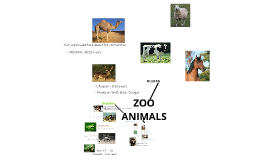 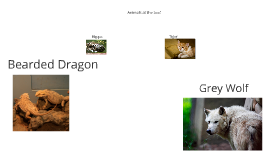 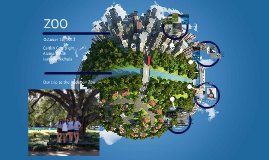 Transcript: Here is a picture of an Asian elephant. Humanity's Effect on Nature In the past, sea lions and other pinnipeds were hunted for their fur and the oil from their body fat. ZOO Caitlin Courtright Alaina Smith Isabelle Nichols Because of pollution caused by humanity, sea lions and other aquatic life have been exposed to our waste, and resulting in the harm of these animals health and overal well being. This is the white tiger which also lives in Asia. The white tiger is just waking up from a night's sleep. He is playing and stretching his body. October 16, 2013 A cheetah stands on the edge of it's enclosure. These are two orangutans who originate from Asia. Representation of Continents Here are two birds preening each other.. This sea lion was having so much fun swimming around in his pool. Nature At Play The gorilla sits staring at something. The peacock was walking and running around the sidewalk of the zoo. Two sea lions swim around together in the clear blue water. Our trip to the Audubon Zoo Majesty of Nature This is the golden lion tamarin and it is from a small area along the South American coast in southeastern Brazil. The peacock walks down the sidewalk with the people. 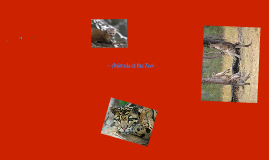 Transcript: Animals at the Zoo! For Mr. Snyder These are the 3 animals I'll teach you about. The American Martan. When you see or if you see one you'll see a a brown bushy tailed ferret sized animal. The American Martan is part of the wealsle family. Martans are predators, or meat eater, or they are even called carniviors. They eat squirrels, mice, rabbits, birds, fish, insects, and eggs, and they will also eat fruit and nuts when these are readily available. The american Martans are also prey to some animals like Bobcats and Eagals. The Clouded Leopard Th e Clouded Leopard is a Large Cat like Lions, Tigers, Cougers ect. There main diet is birds, monkeys, and deer. Porcipines, Wild Boar, Pigs, and Young Buffalo. They live in East and Southern Asia. There one preditor is humans. There Latin name is Neofelis nebulosa. The Red Kangaroo. The Red Kangaroo lives in the middle of Australian. There Main diet is grass, leaves, shrubs and sometimes grains. They are herbivoirs so the don't eat meat. The Red Kangaroo can jump 25ft. in one leap. They can run up to 35 miles an hour. The American Martan Clouded Leopard The Grey Kangaroo The American Martan The Grey Kangaroo is about 6ft high. Clouded Leopard's are the smallest of leopards. Clouded leopards ate carnivors witch means the eat meat. There prey is mainly monkeys, pigs porcipines, goats, deer, birds. A Clouded leopard lives Southern China, Himalayas,Tiawan and the peninsula of Malaysia. The American Martan lives mostly up north like Alaska, Canada,and upper California. They eat Voles,mice and smaller animals. An American Marten looks like a large Weasle with a big bushy tail large eyes and short limbs. American Martens are mostly nocternal and are Carnivors. For Mr. Snyder P1B. For Mr. Snyder Mr. Snyder 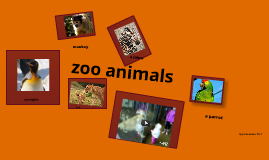 Transcript: zoo animals monkey a zebra a penguin a parrot this is a elephant thats all folks o bananas rule o julian w lion i love parrots the zoo rocks! o julian By Julian weaver div 2 the zoo is awesome 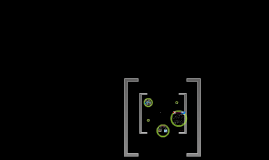 Transcript: Megan and Tiana's Zoo By: Megan Peterson Tiana Frank :) This zoo is located in Brazil. Has a waterpark for the hot days. Many resterants for meals Peting zoo Gift shop Has 20 animals 3 Flying animals 5 water animals 12 Land animals Flying Animals:) Water Animals:) Land Animals:) Thanks For Watching:) Order Cetacea Kindom: Animal.. Gunus:Ceruidae Kindom: Animal Lives: Savanna,Grasslands KINGDOM Animalia Tempatures: 71 Degree Farenhite Family Cebldec ORDER: Charadriiformes Kingdom:Animalia Kindom: Animal Food: Different Species of Plants Food: Acorns Order: Artiodactyla Cuttle Fish Lives: Forest, Grassy Plains Kingdom: Animalia...Phylum: Chordata...Class: Mammalia Order:Sirenia...Family: Trichechidea... Genus,Species:Trichechus Inunguis Tempature: 35 Degree Family Sittidae Kingdom Animal Tempatures: Suptropic Amazonian Manatee Live: Medditeranian Sea Class: Aves lives: Hardwood Forest... Tempatures: 30-35 degree Fahrenheit Phylum: Chordata Family:Peramelidae Lives: Costal Waters Blue Whale Family: Bovidae Food: Ocean Creaters Tempatures: 60 Degree Phylum Cordata Tempatures: 23 Degree Celsuis Family: Dasyodidea Genuis Sitta KINGDOM:Animalia ORDER Primates Class: Cephalopoda Duck Food: Leaves, Fruit, Flowers Grizzly Genus Species: Dendragapus CLASS Mammalia Habatat Forest Genus: Rupicapra Food: Crab Lives: Forest Family Delphinidae Family: Sepiidae The armadillo is a very interesting animal with a very interesting habitat, what they eat, they look very cool, and they are predators to some animals and they are prey to other animals. The armadillo lives in the hardwood forest. The Hardwood forest stays about seventy-one degrees Fahrenheit. The armadillo is a predator to ants that live in the forest. They are prey to other mammals. Their favorite food is insects in the forest. An interesting part is they look like badgers. They have armor with a bumpy back. Food: Penuts Lives: Tress Family Anatidae The deer is a sweet animal with a cool habitat, food, looks, and they are predators and prey to some animals. They live in the forest but, you can see them on the road. They live in temperatures around 35 degree ferienheight. They are not predator because they don’t kill. They are prey but not to animals they are prey to human because people hunt for deer. Their favorite food is acorns that fall off of the trees. Deer have brown fur short fur and some have antlers. Kingdom:Animalia Genuis Species Cebus Tempatures: 40 Degree Celsus KINGDOM: Animalia ORDER:Hyracoidea Lives: Rainforest PHYLUM:Chordata Order Chiropter Food: Fruit Phylum Chordata GENUS SPECIES: Fratercula cirrhata Order Circonifiorms Family: Phasianidae Family: Ursidae Genuis Species Eutheria Food: Pollen and Insects Tempatures: 42 Degree Farenhite Temaptures: 53 degree Tempatures: 68 Degree Class: Mammalia The bird has some cool habitats, they eat food that is good, they look cool, and they are predators and prey to animals. Birds live all around the world. They can live in temperatures up to 42 degrees ferienheight. They are prey to crows and birds that are like the crow. They are predators to crow and other big birds that are like crows. They have their favorite food is fruit. Birds have two legs, wings, and feathers. You can’t see their ears. Class Mammalia Food: Fish Monkey Class Aves Kingdom Animal Class: Mammalia Tempatures: 67 Degree Farenhite Birds Phylum: Mollusca Family: Balaenopteridae Phylum Chordata Tempaturers: 70 Degree CLASS: Mammalia GENUS SPECIES: Crocuta crocuta Hyena Phylum;Chordata Lemur Species: R. rupicapra Food: Incests PHYLUM: Chordata Species: Balaenoptera musculus Species Anas GENUS Gorilla Tempature: 50 Degree Farenhite Order:Peramelemorphia Class: Mammalia Food: Fruit, Plants Species carolinensis Order: Cetacea Food: Saknib. Fish Live: Everywhere Family: Dasyodidea Dolphins are an interesting animal that has a very cool habitat, food likings, looks and they are predator and prey to some animals. They live in the Mediterranean Sea, and they live in some of the oceans. The water that they live in stay around 50 degree ferienheight. They are predators to fish in the water. They are prey to sharks like a lot of other animals. Their favorite food is fish. The dolphin has a fin and has a dark blue skin. They are very smooth when you touch them. Lives: Rain Forest Class:Mammalia The blue whale has some pretty cool facts that include habitat, food, looks, and they are predators and prey to certain animals. The blue whale lives in the subtropics waters. The water can stays at a temperature at 50 degree ferienheight. They are predators to small aquatic animals. They are prey to sharks just like the manatee is. The blue whales favorite food is a small ocean creature. The blue whale is a slate blue color on them and has a dorsal fin. Food: Berries, Insects, Nuts, Seeds KINGDOM: Animalia Kingdom Anamalia Class:Mammalia The Amazonia manatee is a very interesting animal that has an amazing habitat, interesting food, spectacular looks, and like