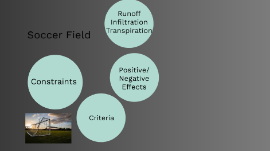 Transcript: Soccer Field -Any soulution must deacrese stream flooding-Yes -Any solution must be built within the watershed boundiers-Yes -Any solution must be completed within 3 years-Yes -Benefits the community-Yes Constraints Constraints Double click to edit Subtopic Criteria -Minimize Runoff, Less than 40% but more than 20% runoff - 2 -Maximize Infiltration, More than 20% but less than 50% infiltration - 2 -Maximize Transpiration, More than 20% less than 40% transpiration - 2 -Maximize Recreational Opportunities, Allows more than one type of age group or more than one new type of activity - 2 -Maximize Safety, Safe to use without taking additional precautions - 3 Total Cost - $400,000 Total - 11 Criteria Positive Effects - The soccer field will benefit 50% of the population, of all ages. The soccer field will be safe to use at all times. The soccer field will also include some park amenities like water fountains, benches, and bleachers. It will be constructed in 1.5 years which will be less than the max amount of time. Negative Effect - Only soccer can be played on the field. And the other 50% percent of the population will use it Positive/Negative Effects Positive/ Negative Effects Runoff Infiltration Transpiration 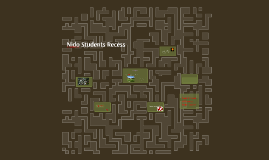 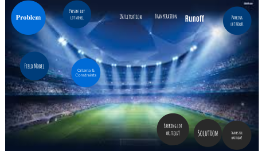 Transcript: by george major lucas brady Our problem is the stream by our soccer field has been flooding. This problem has lowered the recreational opertunities to play soccer. Problem Problem Criteria Criteria Field = 12pts Parking lot = 13pts Constraits Constraits Field= NO Parkinglot= YES Present day lot model Present day lot model BIRD'S EYE VEIW BIRD'S EYE VEIW INfiltration INfiltration If you choose the field, since the infiltraton will stay the same , it will not be a succeful choice. the field will stays the same at 40%. If we choose the parking lot it will be more succesuful because the infiltration will increase to 40% Field : Stay the same at 30% Parking lot : drecreasded to 30% Infiltration Infiltration If infiltration decreses then runoff increases and we want little runoff What if infiltration decreases? What if infiltration decreases? Tranpiration Tranpiration The parkiong lot side will have better chance becuase you are increasing transpiration by 30%. But on the field side the transpiration will stay the same at 30%. Runoff Runoff If you choose the parking lot you , since you're decreasing runoff you have a better chance for less flooding. Surface Runoff Surface Runoff Surface runoff must be decreased to 30 % What will happen if runoff increses? If runoff increases the chances for a nother flood of the stream will increase. What will happen if runoff increses? Parking lot Model Parking lot Model Field Model Field Model After seeing the infiltration, runoff, and transpiration. We see that the parking lot is a succeful choice. Parking lot or field? Parking lot or field? We picked the parking lot because it will decrease run off and increase infiltration and transpiration. It will make the river over flowing not to much. Solution Solution Thanks for watching! Thanks for watching! 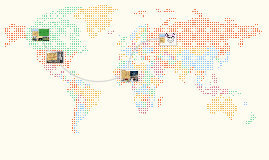 Transcript: if you are younger the soccer field is much smaller. ----------------------------------------------> soccer is a system because all of these rules and stuff work together to make this game and them working together makes a system and the rules by themselves would mean nothing. soccer field how this is a system soccer rules A football match is played by two teams, with each allowed no more than 11 players on the field at any one time, one of whom is a goalkeeper. A match is played in two 45 minute halves. The game begins with the toss of a coin, and the winning captain decides which goal to defend or to take the first kick off. All players must use their feet head or chest to play the ball. Only the goalkeeper is allowed to use their hands, and only within their designated goal area. The aim of the game is to score a goal, which is achieved by kicking or heading the ball into the opposition team's goal. The game is controlled by a central referee, and two linesmen They award free kicks and penalties when rules are broken. For continual breaking of rules or for a bad foul, the player may be sent off England invented a game of running around and kicking a ball in the 19th century (although the Chinese played almost the same thing 10 years earlier). They called it “football,” not because the ball is played with the feet, but because the game is played on foot not on horseback.The first ever game was played on Barnes common at Mortlake, in London on the 19th of December in 1863 between Barnes Football team and Richmond Football team. The game ended in a draw of 0-0. The Football Association rules were later changed to exclude any handling of the ball unless your a goalie. the soccer pitch is an essential part of soccer everything has to be the same including the goal, the 6 yard box, the 18 yard box, the penalty spot, the penalty area, the half way line, the center circle, the sidelines and the corner arc. all measurements are to the right --------------------------------------------> these are the measurements for a full size pitch. A brief history 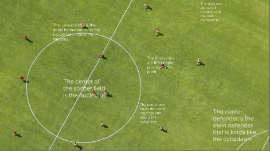 Transcript: Mitochondia is the referee the hash marks are the endoplasmic Recticlum The center of the soccer field is the nucleolus Golgi Bodies is the grass because there is so much of it The goalie box is the cell wall The center defender is the main defender that is kinda like the cytoplasm The center mid holds the team together and also is the cytoplasm. The sidelines are out of bounds so its the Cell Membranes The center circle is the holds he nucleolus so the big center circle is the Nucleus. The ribosomes are the people playing on the pitch 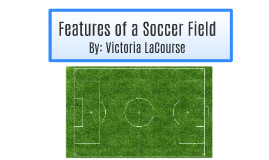 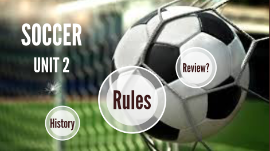 Transcript: SOCCER UNIT 2 History History Invented? 1. 1913 2. England was the founder of the game. 3. Became a game by running around kicking an animal-hide ball to each other. Invented? Famous Players? 1. Cristiano Ronaldo: Portugese athlete who plays professional soccer for the Real Madrid team currently. 2. David Beckham: An English former professional soccer player who played for Manchester United. 3. Manuel Neuer: The best goalkeeper in soccer, still plays and has brought home many World Cup trophies for Germany. Famous Players? Pictures? Rules and Regulations Rules Need to know Soccer Rules: 1. Two 45 minute halves is a complete game. 2. 11 players on each team, and its two teams playing against each other. 3. To win, you score the most goals. 4. You must use head, feet, and chest. Only the goalie can use their hands. 5. Game starts with a coin toss to decide who gets the ball first. Let's Review! Review? 1. How many minutes are in each half? 2. When was soccer founded? 3. Where was soccer first started? 4. Everyone on the field can use their feet, head, and chest? T/F? 5. The game begins with a tip off?