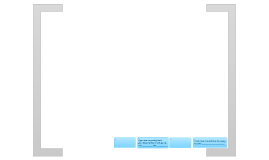 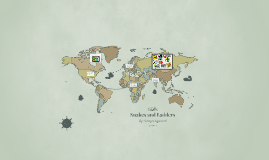 Transcript: How Does This Relate to Life? History By: Sanya Agrawal Snakes and Ladders Snakes and Ladders Demo Video Rules of the Game The rules of this game are that you and your friends take turns and roll the dice. Whatever number your dice stops on, that's how many steps you can take. The board is numbered from 1-100. If you land on a snake, you have to go back all the way until the snakes body ends. If you land on a ladder, you get to go all the way up to where the ladder goes. The first person to step on the 100th block wins. If your dice rolls on the number 6, you can go twice. This game relates to life in many ways. It was made to teach children about what choices they can choose to take in life. The ladders represent good deeds, being helpful, and all the good things someone does. The snakes represent bad luck, anger, murder, cheating, etc. The last number on the board, 100, represents salvation. Conclusion This board game was originated in ancient India. The point of the game was for entertainment and childrens moral education. The game was referred to as "Leela". It was later played in Victorian England, where it got its name; Snakes and Ladders. This game was invented by Moksha Patamu. The point of the game is the moral of doing good deeds. It became popular by spreading out to other countries slowly. So this was my presentation on the Snakes and Ladders board game. Hope you enjoyed! Cites:Shah, Neelam. "The History of Snakes and Ladders."The History of Snakes and Ladders. Neelam Shah, 2010. Web. 24 Sept. 2015. 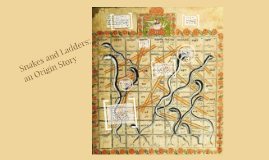 Transcript: Why did people play this game? As said before, the purpose of the game was to differentiate between virtue and evil. Traditional Hindu philosophies were also incorporated into the game, such as karma and kama (destiny and desire). It was used as a lesson for children so that they could learn about God and what was considered virtuous. There were moral teachings behind this origin of this game. These teachings encompassed the idea that there was the ability to attain salvation through doing good, whereas performing evil deeds will provide evil rebirth. Snakes and Ladders: an Origin Story Conflicts of Snakes and Ladders The game, as said before, was developed mainly to serve the purpose of teaching children the virtues and evils of the world. Why did people play Snakes and Ladders? The Continuity and Changes of Snakes and Ladders Saint Gyandev/ Dnyaneshwar The first play of Snakes and Ladders was recorded in the thirteenth century AD when it was invented. However, it is believed that Snakes and Ladders was played dating all the way back to the second century BC in the Northern regions of India. Though there is not any significant conflict that was marked in history as a prominent event, there still was the fact that Europe stole the whole “snakes and ladders” idea and made it their own. Around the time that this idea was diffused, Indian was under British rule and tensions were already high. The fact that their virtuous game was turned into something western just increased tensions and made the British rulers more susceptible to rebellion. When and where was Snakes and Ladders first played? The game “snakes and ladders” was invented by Saint Gyandev. The fact that he was a saint alludes to the whole purpose of the board game, which it about differentiating between virtue and evil. From being used in the second century BC, the game has evolved by diffusing all across the globes, with certain cultures adding their adaptations to it. A rather large example is in Europe, where the adopted the name of “Chutes and Ladders” which is how we know it today. This was developed in 1892, where the common Victorian Philosophies were incorporated. The ladders represented thrift, penitence, and industry which would build up to squares of fulfillment, grace, and success. The snakes (which were later turned into chutes) were a representation of indulgence, disobedience, and indolence which would cause illness, disgrace and poverty. Who invented Snakes and Ladders? Why was the game developed? This game was popular to children of all backgrounds. However, those of the lower class typically could not afford the game, so there would be much less playing in those classes than in the others. Those in the Brahman class were more likely to play and pass on the message to their children. 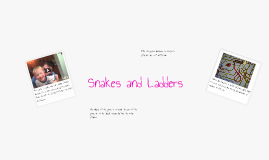 Transcript: Snakes and Ladders Snakes and Ladders is a fun childrens game that in volves rolling dice and moving the amount of squares on the dice The object of the game is to reach the end of the game, or to the 100th square before the other players. I like this game because its easy to play and yet still really fun. This game is really good for smaller children because its a very easy concept to learn. There are lots of different themes to snakes and ladders 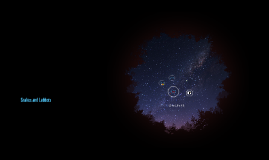 Transcript: Who made this game? What happens in this game? How to play Strategies About the game The board game, today called Snakes and Ladders, originated in ancient India, where it was known with the name Mokshapat or Moksha Patamu. It's not exactly known when or who invented it, though it's believed the game was played at a time as early as 2nd century BC.Oct 12, 2008 Snakes and Ladders a plan of action or policy designed to achieve a major or overall aim. checkers Extra stuff! According to some historains the game was invened by Saint Gyandev in the 13th century AD How to play: Each player puts their counter on the space that says 'start here'. Take it in turns to roll the dice. Move your counter forward the number of spaces shown on the dice. If your counter lands at the bottom of a ladder, you can move up to the top of the ladder. If your counter lands on the head of a snake, you must slide down to the bottom of the snake. The first player to get to the space that says 'home' is the winner. Have fun! What is he goal of this game?; The goal of the game is winning , by not landing on the snakes and wanting to lland on the ladders to win. How many players?; The most players can play are, two or more people. Strategies for Snakes and Ladders; THERE IS NO strategies, it all depends on what number you get on the dye. What is a strategy ; 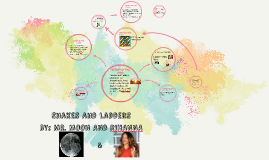 Transcript: RULES OF THE GAME DATE "Saint Gyandev " -Harish Johari (2) "Snakes and Ladders originated from Ancient India, it was used to entertain and teach kids about the struggles of life, as well as fun." - Harish Johari (1) - Dave Rusin of Northern Illinois University (1) "To teach CHILDREN the STRUGGLES of LIFE in a more FUN, more ENTERTAINING way. And get 100 on the board" -Dave Rusin of Northern Illinois University (1) POINT OF THE GAME "Roll the dice, If it lands on a SNAKE'S HEAD, you go DOWN, if you land on a LADDER, you go UP." "First one to reach 100 wins." WHEN WAS IT INVENTED? HOW DID IT BECOME POPULAR? & -Harish Johari (3) LADDERS signify GOOD things that happen in LIFE and SNAKES signify the BAD things in LIFE (a life journey) -BBC Schools Snakes and Ladders BY: MR. MOON AND rIHANNA No Strategy All based on luck Kinda hard to cheat HISTORY OF THE GAME ANCIENT TIMES INDIA STRATEGIES Topsfield, Andrew (2006) "Snakes and Ladders in India: Some Further Discoveries" in Artibus Asiae 66:1, pp. 143–79. Topsfield, Andrew (1985) "The Indian Game of Snakes and Ladders" in Artibus Asiae 46:3, pp. 203–26. Shimkhada, Deepak (1983) "A Preliminary Study of the Game of Karma in India, Nepal, and Tibet" in Artibus Asiae 44:4, pp. 308–22. "A GAME PIONEER NAMED MILTON BRADLEY IN 1943 MADE IT POPULAR" 13TH CENTURY GET TO 100 ON THE BOARD HOW DO YOU WIN? Inventor BIBLIOGRAPHY HOW IT RELATES TO LIFE 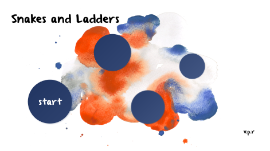 Transcript: Snakes and Ladders v.p.r TOPIC 1 start what is ? It is played on a game board with numbered, gridded squares. ... The game is a simple race based on sheer luck, and is popular with young children. ... I love to play this with my family, since I was little I always encourage me with them to play it, you can play with more than two people, and in some squares there are challenges and this makes it more fun. taking advantage of this quarantine, sometimes we play this and it has helped us more to remember old times, to take more time as a family and have fun. 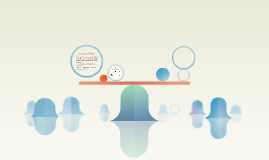 Transcript: Let's play!! Snakes and ladders Your team will be a 2 pupils team You will be given 30 seconds to share ideas and then you must answer! A volunteer will answer the question The first team to hit the final square will win! Are you ready ?