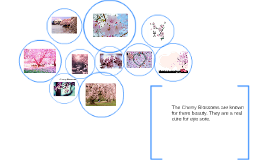 Transcript: Contain amygdalin and prunasin form hydrocyanic acid combined with water. This acid is poisonous but in very small doses it can improve respiration, digestion, and a sense of well-being. Fruit can be used as food and to make green dye motivate the Japanese people stoke nationalism and militarism among the populace. used in propaganda to inspire "Japanese spirit," Scientific name from the leaves. A dainty slow-growing, early white-flowering cherry, a century-old cultigen from Hondo, Japan. An ornamental but the wood has no industrial value. Hardy to -20°C, and crossed with Prunus speciosa has yielded the cultivar Prunus 'Umineko'. Ornamental section Pseudocerasus of the cherry subgenus Cerasus of the Prunus genus. Classified it in a group with Prunus nipponica A cherry blossom is the flower of any of several trees of genus Prunus, particularly the Japanese cherry, Prunus serrulata. Prunus Sargentii Prunus Campanulata high-speed shinkansen service operated between Shin-Osaka and Kagoshima-Chūō in Japan since 12 March 2011. 3. Sakura Color Products Corporation, a Japanese pen manufacturer Cherry-Blossom Kura Sacchan Saki Sakusaku HIMALAYAN CHERRY, INDIA VARIETIES & BLOOMING Nara Period (710–794) when ume blossoms that people admired in the beginning. Heian Period (794–1185), cherry blossoms become more attention and hanami = sakura Edo period, The custom was originally limited to the elite of the Imperial Court, spread to samurai society and to the common people Prunus Nipponica sakura ->200 cultivars BY: AMIRAH AQILAH SAKURA SAKURA VANCOUVER, CANADA PLACES BUSINESS 4. Sakura Lounge, the airport lounge of Japan Airlines Japanese pilots A cherry blossom painted on the side of the bomber ->intensity and ephemerality of life take branches of the trees with them falling cherry petals -> sacrifice of youth in suicide missions -honor the emperor 5. Sakura (cigarette), produced and sold exclusively in Japan, by Japan Tobacco Oshima cherry, Japanese (Oshima zakura) native to Izu Ōshima island and the Izu Peninsula on Honshū near Tokyo, Japan. 2. Sakura Train Known as Sargent's cherry or North Japanese hill cherry, was named for Charles Sprague Sargent. A species of cherry native to Japan, Korea, and Sakhalin (Russia). Grows single pink flowers on 1-in pedicels, result in purple-black fruit in summer. a fast-growing ornamental tree requiring sun and well-drained soil. The tree can tolerate wind, but not air pollution; it is one of the hardiest cherries, and can be easily transplanted Sa Saku-chan Suki Sassy Kuki Sak POSTECH, SOUTH KOREA Prunus Incisa, Fuji Cherry BRAZIL Japanese alpine cherry (Takanezakura) MUSIC Japanese cherry/ hill cherry/oriental cherry/East Asian cherry A species of cherry native to Japan, Korea and China Used for its spring cherry blossom displays and festivals. The flowers are produced in racemose clusters of 2-5 together at nodes on short spurs in spring at the same time as the new leaves appear white to pink, with five petals in the wild type tree. The fruit is a globose black drupe 8–10 mm diameter BENEFITS PARC DE SCEAUX, FRANCE HISTORY Sakura, Chiba , a city in Japan Sakura, Tochigi, a city in Japan formed on March 28, 2005 Sakura-ku, Saitama , a district in the city of Saitama, Japan Sakura Domain , a Japanese feudal domain in Shimōsa Province Sakura, Setagaya, Tokyo a place name in Tokyo Sakura Square, a plaza in Denver, Colorado SAKURA NICKNAME Prunus Specioca ISTANBUL, TURKEY clouds due to their nature of blooming together -->metaphor for the ephemeral nature of life,Buddhist influence, concept of mono no aware. transience of the blossoms, ---the exquisite beauty and volatility, mortality & graceful, readily acceptance of destiny and karma Prunus × yedoensis 'Somei-yoshino' or Yoshino cherry (synonym Cerasus × yedoensis) is a hybrid cherry Prunus speciosa (Oshima zakura) F + Prunus pendula f. ascendens (Edo higan) M It occurs as a natural or artificial hybrid in Japan Flowers are nearly pure white, tinged with the palest pink, near the stem. Bloom and fall within a week, before the leaves come out. Name from the village of Somei ( Toshima in Tokyo). 1.The Sakura Bank, a Japanese bank based in Tokyo and Kobe SYMBOLISM 1932, Akiko Yosano's poetry urged Japanese soldiers to endure sufferings in China and compared the dead soldiers to cherry blossoms. Arguments that the plans for the Battle of Leyte Gulf failed->countered with the plea that the Navy permitted to "bloom as flowers of death. last message of the forces on Peleliu was "Sakura, Sakura" species of cherry native to Japan, Vietnam, China & Taiwan. grown as an ornamental tree symbol of Nago, Okinawa, Ryukyu, Japan. known in English as the Taiwan cherry, Formosan cherry, or bellflower cherry. described in 1883 by Carl Johann Maximowicz. WW II Prunus Yedoensis Prunus Serrulata FAMOUS SAKURA BY COUNTRY NEWARK, NEW JERSEY 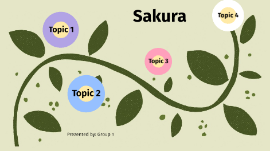 Transcript: Prezented by: Group 1 Sakura Topic 1 Where is this piece of music from? Japan Cited:https:/led gerorate.com/bolg/culture sakura tradianal-japinese song on kate Sakura Folksong Subtopic Pictures Cherry Blossoms Topic 2 It is a traditional Japanese song. What is the form of this piece? What is Do? Topic 3 Do is a solfege note that has syablles in to diffrent ways high and low. Do is .... Do is .... Sakura instruments Topic 4 The instruments that are played in sakura are the Koto and Shamisen. The Koto is related to the harp. The Shamisen is related to the guitar. 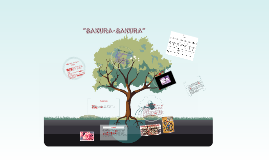 Transcript: Japan is a country that is located in Asia, near Korea and China. Japan is one of the most famous country for arts and their culture. In their music industry, some theatrical performance like Noh, Kabuki and Bunraku has influence the japanese musician from the past to make music that represent ancient history of Japan. Instrument like Koto and shamisen are used to make a music in Japan. The specific music that I will be discussing is Sakura-Sakura, a traditional Japanese folk. Sakura-Sakura, or known as Sakura, is a traditional japanese folk music that represent Japan. Sakura is a name of a flower that known as cherry blossom. Cherry Blossom is Japan's national representative flower. This song is about spring, the most waited season in Japan. This song was made in the early sixteenth century (Edo period). It became popular on the late eighteenth (Meiji period). It was sang by the kids in that period to represent the spring has come. The japanese didn't use any instrument for this song. The original song is only vocal without any instrument but in the improve song, it use koto as the instrument and add a new section such as the 1st verse and put the original song as the 2nd verse, and they add an introduction . Keiko Imamura remake the original song of "Sakura-Sakura". She put the original song as the second verse in her new song that she create. Alfred Freed 's Fifth Symphony "Skaura" was based in this song. Marc Edwards has record an album featuring 3:20 minutes version of Sakura-Sakura in free electric guitar style. Introduction "Sakura Song (æ¡æ¡, ããã ããã) W. Lyrics & Translation." YouTube. YouTube, 22 Feb. 2011. Web. 08 Feb. 2014. "Sakura Sakura." Wikipedia. Wikimedia Foundation, 27 Jan. 2014. Web. 08 Feb. 2014. "AllMusic." AllMusic. N.p., n.d. Web. 08 Feb. 2014. Example of the song that is improved by Keiko Imamura. Influence to the Modern World The melody is pentatonic, using scale degrees1 1,3,4,6,7 (C,E,F,A,B). The tempo is slow The key is a minor Time signature is 4/4 (4 beats in a bar) The original song is only vocal, no instrument The improved song has 2 verse. The original song is the second verse while the first verse is a new-created Analysis for the Original song Musical Features Bibliography There are 4 beats in a bar. The first bar is the same as the 2nd, 11th and 12th bar. The first verse has same bar inthe 2nd and the 4th bar. The beginning of the second verse has the same bar like the first verse but the 3rd and the 4th verse repeats and its different from the first verse. The end has a different types of chords from the previous bars. Origin/History "SAKURA-SAKURA" 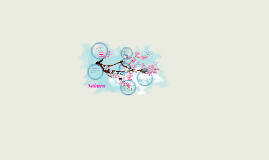 Transcript: How does our government raise money? * The basic services we provide is that we have stores providing the basic needs to live in Sakura. The stores would be grocery stores that provide food and water and house supplies. There is a few clothing stores for our people. And also there are stores that are more crafty, to make things for their houses. Basic services we provide for our country What Is an Oligarchy? * The government will listen to the person view, we will consider it, judge it , and the government will come up with a solution for that person's view. The people's view taken into account Nation's currency We are an oligarchy our flag is pink and white with a crescent designed moon, which means "to grow", which is what we plan on doing with our government. Country Location What are our governments benefits * The person who has all the power is the president. The president makes all the rules and all the decisions. If the president can not do the duties of being president, then the vice presidents will have to step in. *The president will make the decisions and if the president wanted another opinion she would go to the two vice presidents for their help but in the end the president would make the final decision. The decision making in Sakura * our country is the island next to Lake Rebta * our country's climate is always sunny with a light breeze with the temperature of it always being 70 degrees * our region is the tropics * the landscape for Sakura is that the land is flat with willow trees, cherry blossom trees, and pink lakes surrounding us with white sand What the government does not provide * Our government benefits are lower taxes *Low gas prices *No warfare *Health care benefits How to become a leader in our government Sakura Sakura * Our government is raising money by trading on boats to other countries * The money we get from taxes * Visa free Small Group of people having control of a country, organization, or institution. Drawbacks of Sakura * Our government does not provide housing, vehicles , water, and electricity * Our government will listen to the speeches that they have provided to explain why they think they should be leaders . After they are done giving their speeches, the top leaders will take a vote and the majority will win * Our nation's currency is nums 1 Num=1 dollar Who has the power ? * On Sakura there is are not a lot of roads to travel on. There also isn't a lot of places for people to go. 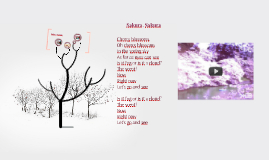 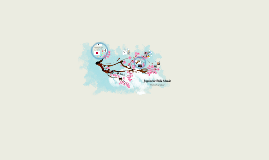