Transcript: He felt he had fulfilled his campaign pledge of 1980 to restore "the great, confident roar of American progress and growth and optimism." President Reagan -Disliked traveling abroad ("the highest I want to go is on the saddle of a horse"), but he understood the importance of representing America to form stable relations with other countries as a realist, he understood the world and America's role as the token to freedom for people worldwide -he thought it was crucial to support a demoralized and underfunded Us military, an instrumental factor to ensure peace around the globe and at home as well - he used his position as Commander in Chief well -by the time he left office, the military budget had increased 43% ; along with this, troops, weaponry, and equipment increased significantly and the US intelligance program soon improved however, the enormous amount of money that was put into improving military conditions also contributed to the national deficit during his time in office -he had one well-defined foreign policy goal: to contain the Soviet Union, or the "evil empire" he wanted to finally conclude the Cold War His Secretaries of State, General Alexander Haig and George Schultz, as well as his Secretary of Defense Caspar Weinberger, among others, assisted Reagan in developing this Cold War strategy With Prez. Reagan attended Eureka College to study economics and sociology played on the football team and acted in school plays after graduation, he worked as a radio sports announcer created his own innovative program known as the Reagan Revolution, which aimed to reinvigorate the American people and reduce their reliance upon Government. The Wonderful Foreign Policies of President Ronald Reagan In his last debate with President Jimmy Carter in 1980, Ronald Reagan asked the American public: "Is America as respected throughout the world as it was? Do you feel that . . . we're as strong as we were four years ago?" Throughout the campaign, Reagan made clear his belief that America's international prestige and power had declined drastically over the entire preceding decade. FRIENDS -Reagan and his policymakers, including both his secretaries of state, believed that the United States had national security interests in the region to combat the Soviet influence -At the same time, Reagan's relations with Israeli leader Menachim Begin were less than harmonious and worsened considerably early in the President's first term -in August 1982, Reagan sent 800 U.S. Marines to Lebanon as part of a multinational peacekeeping force that also included French and Italian forces -Their mission was to maintain a cease fire during which PLO fighters in Lebanon would be allowed passage to neighboring Syria. Once the PLO left, Israel withdrew from Lebanon and after the PLO fighters left, the U.S. troops followed in suit -However, after international forces left, Lebanese militia, affiliated with Israel, massacred 700 refugees at two camps in mid-September 1982, so Reagan ordered the U.S. forces back ashore -In April 1983, Lebanese terrorists from a group called Hezbollah—which received financial and logistical support from Iran and Syria—detonated a truck bomb in front of the American Embassy in Beirut -on October 23, 1983, terrorists blew up the Marines' barracks at the Beirut airport, killing 241 U.S. servicemen, most of them Marines -Reagan called it, "the saddest day of my presidency…the saddest day of my life." -In February 1984, the surviving Marines were withdrawn to U.S. vessels waiting offshore. Reagan described the withdrawal as "redeployment," but he would not again send ground troops into Lebanon or any other place in the Middle East. START Reagan won 489 electoral votes to 49 for President Jimmy Carter. -designed to be a national defense network of missiles that could target and destroy any incoming enemy missiles before they reached the United States -unfortunately, prototypes of the seek-and- destroy technology often failed the trial runs miserably -SDI's estimated price tag totaled nearly a trillion dollars -Many Americans also feared that Reagan's conservative Cold War ideology would only lead to war -in 1982, 800,000 Americans rallied in New York City to press the administration to stop creating more nuclear weapons -Reagan denounced these protestors as peace-loving "doves" and continued developing the US weapons arsenal -although the Reagan administration wanted to remain neutral in the Iran-Iraq affair, the US was sending some military equipment to Iran -The Contra part of the affair was the attempt by a small group of National Security Council staff members and former military men to use the profit from the sale of these weapons to the Contra rebels opposing the Nicaraguan government. -On March 4, 1987, Reagan gave a speech saying he took "full responsibility for my own actions and for those of my administration." He went on to say, "A few months ago I told the American people I did not trade arms for hostages. 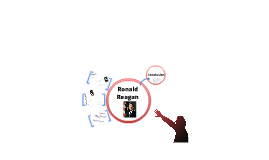 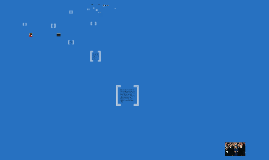 Transcript: He was born in Tampico, Illinois on February 6th, 1911, to Nelle and Jack Reagan. He had one brother and his name was Nellie. He was raised in Dixon, Illinois, where he had gone to Dixon High School. While he was in high school, he found that he liked acting, sports, and storytelling. His first job was a lifeguard, and he had saved 77 lives while working. He met Jane Wyman, from being in a movie with her. They got married in 1940. They had two children, Maureen and Christine. Christine only lived one day, so they adopted Michael. He was the 33rd Governor of California. He was sworn in on January 2nd, 1967. He had served 2 terms before he decided he wanted to run for President. In the 1980 election, he won against Jimmy Carter. Reagan's Vice President was George H.W. Bush. Ronald Reagan was the 40th President of the United States, and he was a Republican. He was inaugurated as President on January 20th, 1981. When he ran for a second term as President, he won in every state except one state, which was his opponent's home state. He was inaugurated as President of the United States on January 20th, 1985. http://en.wikipedia.org/wiki/Ronald -Reagan http://upload.wikimedia.org/wikipedia/commons/thumb/l18l/Nancy_Reagan.jpg/200px-Nancy_Reagan.jpg www.youtube.com/watch?v=7yJuaa033m8 http://upload.wikimedia.org/wiki_in_the_rotunda_at_the_U.S._Capitol_1985.jpg He and Jane got a divorce in 1948. He met Nancy Davis, and then they were married March 4, 1952. They had two children, Patrica and Ronald. He had a total of 4 children. After graduating college, he moved to Iowa to be a radio broadcaster. Then he moved to Los Angeles in 1937, where he went to be an actor. He acted in Knute Rokne and played a role as George Gipp. This is how he got the nickname "The Gipper". He went to Eureka college, and majored in Economics and sociology. He was good at politics, sports, and theater. He was a member of the football team, captain of the swim team, and he was elected Student Body President. Sources In 1994, a few years after he had left office, he was diagnosed with Alzheimer's Disease. Then on June 5th, 2004 at age 93, he died of pneumonia, which was caused by the Alzheimer's. After his death, over 100,000 people came to see his grave. Sources http://presidentsusa.net/reagangrave3.JPG Ronald Reagan While he was serving his second term as President, he signed the Immigration Reform and Control act, which made it illegal to knowingly hire or recruit illegal immigrants. While he was President he created "Reaganomics", which was a tax cut. Reaganomics made him a very memorable president, because after Reaganomics, many Republicans and Democrats liked his ideas. Sources 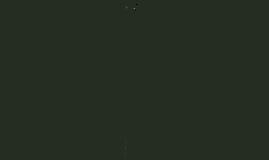 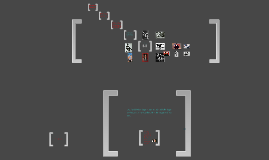 Transcript: 1940 Reagan appears in Knute Rockne, All American 1942 Reagan leaves Los Angeles to join the U.S. Army Air Force 1945 World War II ends, He returns to Los Angeles and his acting career. 1947 Reagan serves as president of Screen Actors Guild. 1980 Reagan is chosen to be the Republican presidential candidate, with George H. W. Bush as vice president. In November, they win the election. 1981 Reagan takes the oath as the 40th president on January 20. He survived an assasination attempt by John Hinckley Jr. later in the year. During his first year in office, Reagan begins his plan to strengthen the nations economy, a plan that later becomes known as "Reaganomics" 1954 Reagan begins hosting the television show, General Electric Theater. 1962 Reagan joins the Republican Party 1966 Reagan runs for governor of California. He wins the election and serves until 1974. Thanks for listening! 1928 Reagan graduates from North Dixon High School. 1932 Reagan graduates from Eureka College. He worked as a radio sports announcer. 1911 Ronald Wilson Reagan is born to Jack and Nelle Reagan on February 6 in Tampico, Illinois. He is the youngest of two boys. Ronald Reagan A Great President By: Matthew Lanahan Room 504 4th Grade Mrs. McLaughlin May 29, 2012 1985 Reagan was inaugurated for a second term as president of the United States. 1989 Reagan leaves office at the age of 77 and return home to California. 1991 The Ronald Reagan Presidential Library opens in Simi Valley, California 1937 Reagan moves to Los Angeles to begin his movie career. Appears in his first movie. 1994 Reagan is diagnosed with Alzheimer's disease and announces his condition to the American public. 2004 Ronald Wilson Reagan dies on June 5 in Los Angeles, California at the age of 93. 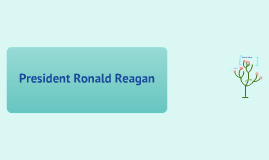 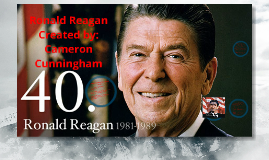 Transcript: Reagan had major tax cuts , increased military spending, and reduced social programs. Made history in 1981 by making Sandra O'Day the first woman to be part of the U.S. supreme court. He was sworn into office 1981 but had an assassination attempt on him which kept him out of the office for 2 months. Married and had two children but eventually gets divorced and remarries in 1952 having two other children. He went to Eureka College, played 3 sports as well as being heavily active in the theater club. Won the nomination in 1980. Was a liberal but eventually turned into a conservative. Reagan ran for the republican presidential nomination in 1968 and 1976 but was unsuccessful Ran for governor of California in 1966 and won by a margin of 1 million votes Reagan was re-elected for the next term and still had economic and social prosperity for the country. Chose George W. Bush as his running mate to take on Jimmy Carter and Walter Mendale By 1983 the economy had started to recover and propser Only president to ever have been divorced. A little information about Ronald Reagan Tried out for Warner Bros. and landed a spot in a movie, would eventually star in 53 different films. He was born in Tampico, Illinois on February 6,1911 Ronald Reagan Created by: Cameron Cunningham 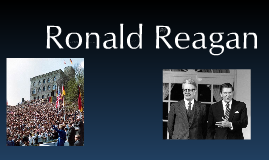 Transcript: Ronald Reagan He was born on February 6 1911 in Tampico Illinois and died in June 5 2004 He went to Eureka collage where he studied economics and sociology He won a hollywood contract and appeared in 53 films He was married two times He took office in 1981 and was shot but recovered He was president from 1981-1989 He send bombs to Libya He was the 40 president