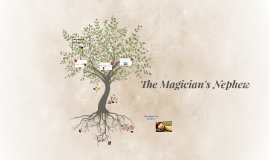 Transcript: I do recommend The Magician's Nephew because it is very entertaining. It is one of the best books I have read.The book shows braveness and that you need braveness in your life and be ready for what the world throws at you. One theme in the book is friendship because Polly and Digory had to keep a strong friendship throughout their journey. Digory- a 13 year boy who likes adventure Polly- a 13 year girl who is very clever Uncle Andrew- A mysterious old guy Jadis- an evil witch who thinks of herself Aslan- the creator of Narnia Literary item About the Author The Magician's Nephew By C.S. Lewis Themes One literary item in the book is personification because Aslan can talk. Theme two in the book is courage because Digory and Polly had courage to face challenges that the worlds gave them. Clive Staples Lewis was born on November 29, 1898 in Belfast, Northern Ireland.In 1911 Lewis was enrolled as a student at Cherbourg House. From April 26 until Septmember 1917, Lewis was astudent at University College, Oxford. Three years after the outbreak of WWl in Britain, he enlisted in the British army. On April 15 1918 Lewis was wounded on Mount Berenchon during battle of Arras.On May 20, 1925 Lewis was elected a Fellow of Magdalen College, Oxford and served as tutor in English Language and literature for 29 years. His first book was released in 1950. Lewis died November 22, 1963. In The Magician's Nephew Digory and Polly are two kids who go exploring. Digory's Uncle Andrew sends them to different world by magic rings. They explore another world its called Charn and they awake a witch name Jadis. They accidentally take Jadis into their world. Jadis causes chaos in London while on a horse with Uncle Andrew and the hores's owner beside it trying to calm it down Digory and Polly ran around and grab Jadis. they took to the in between world. They all jumped in a random world. It was dark outside then all of the sudden they heard singing. The sun arose trees were growing everything was coming to life. The singing was coming from a lion named Aslan. Aslan was creating Narnia. Aslan choose two of every kind of animal and the two he chose could talk. The horse's owner became king and his wife became queen they both ruled Narnia. Digory was put to a task and Polly came along the horse became a flying now named Fledge. Digory completed the task for Alsan and he gave the apple he had to get from a special tree became the protector of Narnia. Aslan gave Digory an apple for his mother who was sick they returned home. Polly went home, Uncle Andrew drank wine, and Digory gave the apple to his mom. The next morning she felt better and Digory dug a hole for the core of apple. It grew into a tree. One day a bad storm came and blew down the tree. Digory made it into a wardrobe. Setting Presentation By RJ Myers Literary item Summary Recommendation The Magician's Nephew Most interesting thing London in 1950's Narnia Charn The most interesting to me the book was when Aslan was singing and the world of Narnia was coming to life just by a song. Characters 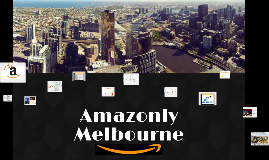 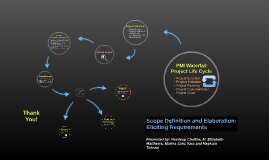 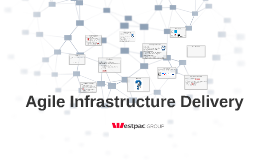 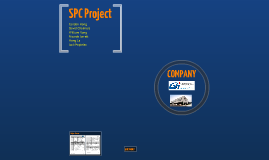 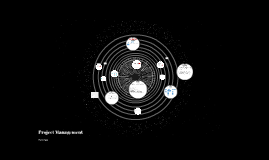 Transcript: Quality It is important to know the risks of a project. Risks sometimes lead to project failures. Project team WBS Example of the total slack from several activities from this project. Organize and manage your events. Consult any relevant information about the event programmee. Query the speaker at the end of the keynote without the need of a microphone. Roles Daniel Ramos: Manager, FullStack Developer John Smith: QA Tester Project milestones Organisational structure Provides chronological output -People getting sick -Legal issues -Operating environment -The APP being denied by the distributors -Defect issues -Delays caused by third party frameworks -Failure to meet the specification requirements. GANTT Chart Quality is important to ensure that the application works as expected, according to what was specified in the requirements document Resources are important because they determine if the project can be finished without delays. Helps determining if a resource has overallocated work. Stakeholders Activities Project schedule Resource allocation PERT What is it? Define important events Contribute to early feedback Keeps the client happy Event App How this project will ensure its quality Manager: Daniel Ramos Additional resources John Smith Project milestones Diagram of the work to be done Objectives: Estimations calculated by using the following equation: ​​ = ((​​ + 4∗​​ + ​​) / 6) Project duration Allows to determine if a task can be delayed without delaying the whole project. Project schedule The team will use unit tests during the development phase to ensure that each function is working properly (Functional and defect testing) The team will use Usability tests to ensure that the User Interface works as expected and is user friendly. Digital distributors. Managers. Sponsors. System administrators. Mobile users (target). Public/Private Organisations. THANK YOU Risks of this project Total float/slack Event APP Project Management Risks Stakeholder and team communication 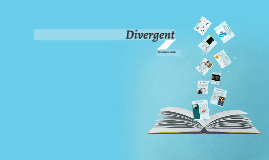 Transcript: Veronica Roth At age 22, Veronica Roth's career of an author took off rapidly. Her first novel was published and had movie rights before she graduated college. Roth attended Minnesota's Carleton College before tansferring to Northwestern, graduating from the Prestigious Writing Program. Main Characters Summary of Divergent Tobias Eaton- Also called Four, because of his four fears. He is the instructor of the transfer initiates in the Dauntless compound. Beatrice Prior - The main protagonist and narrator of the divergent series. She is a strong-willed 16-year-old girl, who transferred to Dauntless. Setting Presentation By: Kaylyn Dunn Themes Beatrice Prior lives in a society that is divided into five factions. Candor (The honest), Abnegation (The selfless), Dauntless (The brave), Amity (The Peaceful), Erudite (The Intelligent.) On a particular day of every year, all the sixteen- year- olds have to pick a faction where they live the rest of there lives. Beatrice's decision is either to stay with her parents or be herself. She makes the decision that shocks everyone including herself. Be the Person you want to be- The second theme is be who you want to be. This is a theme, because throughout the whole book Tris has to figure out who she really wants to be and how to express herself without letting her secret out. Divergent Choices- The first theme is choices, because the tagline for this book is, "One Choice can Transform You." In Divergent the choice of your faction is one of the most important choices a person can make. Born August 19, 1988 The setting in the book Divergent is portrayed as a futuristic Chicago, because of the transportation and tall buildings. First off, let me just say this was one of my favorite books. The book was so exciting throughout the whole plot. I found myself reading and never wanting to put the book down. One of the main reasons I loved the book was, because the main character, (Beatrice Prior) was supposed to be the weakest initiate, but in the end she was the strongest and bravest. This is why I recommend that everyone should definitely read Divergent. A prominent item in the book Divergent is the hyperbole " ... my heart will burst out of my chest any minute now." This example of figurative language is on page 38. One scene I found very interesting was when Beatrice was in a stimulation to test her bravery. In the stimulation Tris found herself stuck in a box that was filling up with water and she needed to find a way out. Since Tris is divergent the first thing she did was bang and tap on the glass causing the glass to break. After breaking the glass, Tobias figures out she is Divergent. Most Interesting Prominent Item Veronica Roth Recommendation