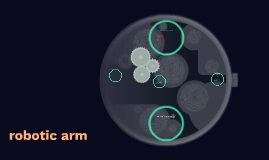 Transcript: materials used parts design bill of materials *lazy Suzan *strings *pipe * the mains parts would be the base, the joints,the arm, and the gripper also the strings that will be attached to move the robot arm where we want it to go. robotic arm the design is based on a crane cause cranes basically do the same thing they move side to side move up and down and the base stays on one place without being moved. 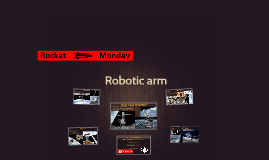 Transcript: Add-on's Necessity Mechanics Weightless in orbit Not MASS LESS Inertia still works Slowing down is tough Boom Assembly Dextre Thanks FOR Watching Folded for transport Each joint has one rotation motor + planetary gearbox Encoder + Brakes 1200 Watt FONTS Robotic arm Physics Hope U guys liked it or learned from it in that case LIKE IF U Disliked it DISLIKE and Comment Reach & Repair Only way for berthing Space is Hard & Dangerous Don't have crane for construction ISS Would not be possible (canad arm 1) Must have In SPACE 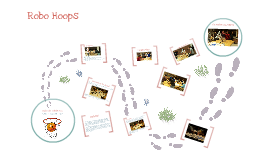 Transcript: Critical Design Specs By Zach Cheng and John Gote' Analysis Performance (continued) -Overall we were pleased with our project. We faced many road blocks in the construction and redesigning phases but we continued to make changes to the robotic arm until it performed how we expected it to. -One factor that could have improved our placing in the March Madness tournament is practice. We were so focused on completing the robot that we didn't have too much time to master the controls which we believe hurt our performance. Robo Hoops The Boyle's Law Ballerz Hydraulic Robotic Arm Construction Performance Construction (continued) -Double Gripper -Styrofoam Arm -Turn table on top of small motor (redesigned to a bolt/nut glued to the turn table) -Turn table supported by upside down bolts to stablize -The first game we lost in overtime after a 0-0 tie in regulation. We experienced some troubles in our rotation system, arm extension, and grippers. -The second game we pulled out a win after making some modifications. However our gripper still experienced difficulties. -Our third game we won and the robotic arm worked without any problems. -We lost our quarterfinal game. However our robot still performed up to our standards. 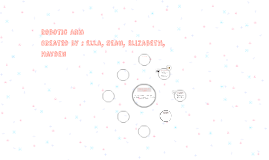 Transcript: Step 2: Brainstorming Criteria must assemble a tower of three blocks 2 people must operate must be placed in order of sizes completed in 5 minuts or less Step 5&6: Consider Alternative Solutions and Select an Approach Step 1: Define the Problem Step 3: Research Fluid Mechanics: "The branch of mechanics dealing with the properties of fluids in various states and with their reaction to forces acting upon them". -https://www.google.com/?gws_rd=ssl#safe=strict&q=fluid+mechanics Hydraulics: the branch of science and technology concerned with the conveyance of liquids through pipes and channels, especially as a source of mechanical force or control. -https://www.google.com/?gws_rd=ssl#safe=strict&q=hydrolics Our group must design a robotic arm using fluid mechanics to move and stack 3 blocks in less than 5 minutes. Constraints 4 hydraulic cylinders( 8 syringes)12 cc 4'of1/8" plastic tubing 1 piece pine @ 1/4 x 12 x 12 rubber bands 1 dowel rod @ 3/16" diameter x 12" 1 5 3/4 x 8" block of wood Criteria and constraints Robotic Arm Created By : Ella, Sean, Elizabeth, Hayden 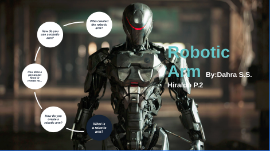 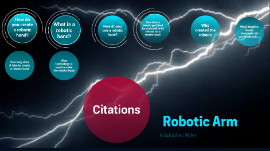 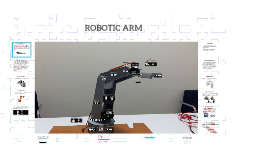 Transcript: a) Phalanx Proximal 4-) CRUZ OMEGA This part allowing the rotating servo motor of the base This flanks the same length , but angle varies are changes. This flanks always can not symmetric . INTRODUCTION This segment balance system and support base in the center. Connection the servo motor part and bottom of the robotic arm segment. HASAN ÖZHAN Scara robots are robots that can do 3 translations plus a rotation around a vertical axis. PART 3 CONTROLLER BOARD ADVİSER: ASST.PROF.DR DÜNDAR YILMAZ b) Phalanx Medial The Arduino Leonardo is a microcontroller board based on the ATmega32u4 (datasheet). It has 20 digital input/output pins (of which 7 can be used as PWM outputs and 12 as analog inputs), a 16 MHz crystal oscillator, a micro USB connection, a power jack, an ICSP header, and a reset button. It contains everything needed to support the microcontroller; simply connect it to a computer with a USB cable or power it with a AC-to-DC adapter or battery to get started. Robotic arm has a two pincer. Finger’s are symmetric. The pincer’s max. distance is 64 mm. The fingers max. can keep the coke. Allowing rotation for the robotic arm part. After then connection the servo motors and omega part. Firstly part there are 5 segments.; 5-) COVER There are many ways of controlling an industrial robot arm. The most industrial robotic arms are controlled by a succession of commands directly to the servos that tell the angle to be taken at all times and repeat a sequence of positions as required. This model would be used in the classic chain arm Mounting grab an object and place a tape or other classified place. If we seek our arm is focused on user instead of to a single specific use, we will provide some input and react accordingly. We could define an interface as a means we use to control a machine or a program, for example a keyboard, joystick or another program. In this case we use a different program when we use to control the robotic arm. This program is a graphical interface, ie, a window where you use buttons to send commands to the robot. The program will use as interface is programmed in a different environment to the driver program, this time we use the Visual Basic environment. Redundant Robots ROBOTİC ARM FOR THE BUİLD PARTS 3) Arm B This segment to carry the weight part. Rotation for the robotic arm balanced. This segment has a very simple design. This segment strong and big enough. 4) Servo Beta Scara Robots OBJECTIVES This motors mission remove on the load. The weight is 103 grams, and ıt applies 19 kg pressure per cm 60 degrees finished also the 19 sn, maximum turns is 165 degrees. This segment very important for the robotic arm, because connection the upper and lower segments. Connection the servo alpha motor segment. 2) Servo Alpha KAAN KIZILBABA 2-) SERVO OMEGA MOTOR The robotic arm AURA consists of 13 printed pieces 5 servos with five crosses and a plate controller, absolutely all the pieces are printed on ABS. Arm structured in three steps to simplify the explanation, these stages are based, arm and hand. 1) Arm C Cartesian Robots At third part, It use hand for the catch something and position makes Q’s move. This part accours arm C, servo gama , servo mono and two fingers. 3-) SERVO MOTOR SUPPORT APPARATUS This segment is last finger , and keep the object .Fingers are symmetric and always parallel work. Main Objective: Design and build a simple robotic arm to use, and it can be implemented easly with low cost. ROBOTIC ARM Robotic Arm Types 6 Axis Robots AURA is a home industrial robotic arm with five degrees of freedom.The arm is designed at its entirely in a 3D modeling program, its parts are manufactured using a 3D printer working in ABS, a cheap and durable plastic. The robot must movements and positioning his five servos, each specifically chosen for the role that plunges. These servos are directed from the robot controller board, an Arduino Leonardo is loaded in memory a program written in C language that interprets incoming commands and manages the servos Act accordingly. Preliminary Description This part very mixed .This part same the “U” and there are 3 segments. There are 2 loteral and connection of the servo beta segment.Arm A controlled the servo alpha. It has a curved outher surface, and 14cm. Arm C accours two servo motors and properly designed four pieces. The upper segment is coupled with the arm C. c) Phalanx Distal PREPARED by This segments send the movement and provides position of the finger. The right flanks opposite move. Servo motors through gears another flanks transmits the movement so fingers position always remints constant. Servo beta is arm Beta’s strength and move on the movement, but on the arm A. We need strength motor in this position. Servo beta provides force and move arm of Beta, but it stays up to arm A. At this station we need to a powerful servo motor, but it should not be so weight. Servo motor is 51 gram. It makes 9 kg pressure per cm. FURKAN KÖMÜR Servo motor 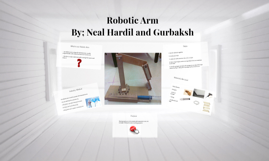 Transcript: What is our Robotic Arm Purpose - Foam Boards - Hot glue - 6 10 ml syringes - Tubing - Cardboard and Tape -Our Robotic Arm is built for people with Amputated arms - Our arm will help the customers by - Lifting there cups when they want to drink - Eat there own food without help - Lifting items such as grains, serial boxes etc Conclusion That is our presentation, Now we will show you how our arm works This hydraulic arm is for people with amputated arms. An example of this arm in use is picking up grains. Robotic Arm By; Neal Hardil and Gurbaksh Industry: Medical 1. Get all materials together 2. create your base 3. create arm with extention for a 10 cm reach 4. then using hot glue and some tape attach the arm extention to the base. 5. Get the syringes and place the syringe in one side of the base where the flap is. Setup the 2 syringes so the end of one is Steps - our robotic arm is a type of mechanical arm, usually programmable, with similar functions to a human arm - Our Arm is a open sided cube with a syringe that opens and closes it Materials We Used