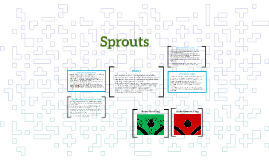 Transcript: Sprouts Created by: Zack Masuda-Mercado 10. 31. 2017. Supplies Supplies Supplies for planting sprouts are, :Mason Jar :Tablespoon :Mesh Screen :Water :Sprouting Seeds SUBTOPIC 1 SUBTOPIC 1 SUBTOPIC 2 SUBTOPIC 2 CHARTS PICTURES PICTURES Photo 1 Photo 2 Photo 3 Steps What To Do 1ST Step: Put 2 teaspoons of any sprout seed into your mason jar 2nd Step: Fill the Mason Jar halfway up with water. Let it sit overnight 3rd Step: You drain the water after every 8 hours and then rinse it out untill it is clean. 4th Step: After 4 days you take the sprouts out and count the sprouted ones and the non-sprouted ones. Steps continued Steps continued Step #5 Put the sprouted ones inn a ziploc bag Step #6 Take the unsprouted ones and put it in the trash Step #7 You take your unsprouted and your sprouted count and write it down Conclusion Conclusion So for the conclusion, I think that overall it was fun to test out sprouts in a jar, and that we got to taste some of the sprouts. We had done another "Grow sprouts in a jar" experiment on a bad moon, I had thought the sprouts were not as juicy. Thank you for reading bye! 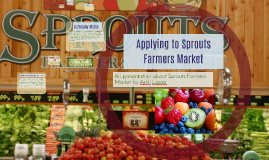 Transcript: In the year 2002, the Boney family, a longtime family of grocery store entrepreneurs decides to create Sprouts which is based in Phoenix, Arizona. Later opening the first store in Chandler, Arizona After only two years of being open, Sprouts farmers market begins to expand, and opens its first grocery store in Plano, Texas. In the year 2009, Sprouts opens twenty three stores over the course of only seventeen months. Sprouts currently has over two-hundred stores in thirteen states. Citations The net profit was $30.2million, $12.5million more than the previous year. That is an 142% increase from the previous year. Sprouts also made a 20% more profit from the year before because of revenue, making a $743.8million in the year 2014. An presentation about Sprouts Farmers Market by Ashli Loeza How much money does Sprouts make a year? Applying to Sprouts Farmers Market Company Motto Company History 1.)Sprouts provides healthy recipies, as well as the nutrition facts in all of their products online. 2.) There are over 180,000 emplyees. 3.) There is an online tour of the grocery store. https://www.sprouts.com/web/guest/careers I would love to work at Sprouts because I value health as much as they do. I would be more than glad to help people improve their health lifestyle. Sprouts also has many vegan options! At Sprouts Farmers Market, the company deeply values health for the community. With the motto "Healthy Living for Less." Sprouts commits to helping people have the freshest produce, as well as educating people on health. In some stores, Sprouts offers free health clinics and workshops. Intresting Facts Why do I want to work there? 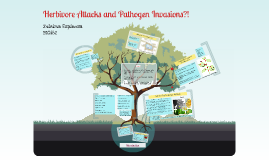 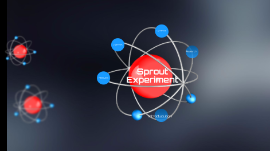 Transcript: Sprout Experiment Introduction Introducution Sprouts the second evolution of a seed before turning into a plant even before it turns into a plant it still is edible. Especially with salad but you have to do it care fully and this slide will show you all the steps. Before we do that you can see the purpose me and my class did this on the ball on the right well the first step is research we have to find research about what we are doing and how we are going to do it The main purpose we actually did a project like this was because we wanted to make a farm then it escallated into a project. Before actually doing this project we had to do some research so we used the hawaiin moon calender. Purpose Purpose Research Before the experiment we must do the materials the first thing you are going to need is in the box right next to this text and if you are asking why do we have to do grab all of this materials well the research me. My class did was to first watch a video of what we are grabing to do this project and learned about the hawaiin moon calender but I already explained that to you already but not the day you should do it. The days you should do this is on the 19th Research 1. Mesh Screen 2. Mason Jar 3. Sprouting Seeds 4. Mason Jar lids 5. Water 6. Tablespoon 7. Bowls/Buckets Materials Materials Before the experiment we must get the materials the first thing you are going to need is in the box right next to this text First fill fill your mason jar with seads until it covers the bottom of the mason jar then put the mesh screen on top of the mason jar then screw on the mason jar lid and take of the part of the mason jar lid that covers the hole on the top before screwing it on. When you are done doing all of that you have to fill the mason jar with water dump it 3 times right when you do it and in the morning and before you go to sleep then put it upside down on a cloth after filling then draining 3 times after 4 days of doing it the final step is you can now eat the sprouts with a salad or another dish. Steps Steps Before me and my class actually did the steps to the sprouts we had to do a hypothesis because of the scientific method. The hypothesis me and my class had was if we plant on the Muku moon phase then we will get sprouts better than onthe 'Ole Ku Kahi mmoon phase because the Hawaiin Moon Calender said so Hypothesis Hypothesis After doing both experiments we counted our sprouts me and my class used mung beans on the good and bad moon after comparing them. The Muku moon phase was better. The 'Ole Ku Kahi moon phase sprouts were dry, and small but the Oleku kahi moon had more of the sprouts we grew than the Muku moon even if the Oleku kahi moon had more doesn't actually mean the ole ku kahi moon Experiment Experiment Analysis Analysis 9,320 Muku Olekukahi Seeds not Sprouted Seeds Sprouted Muku Olekukahi 8,935 319 Qualative Data Qualative Data 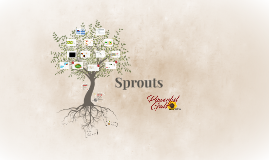 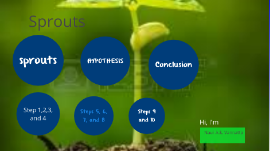 Transcript: Naui .k.k. Vannatta Sprouts Hi, I'm sprouts sprouts Supplies and pictures Supplies and pictures Supplies: Supplies: To grow sprouts you will need, a mason jar, seeds, a cap for mason jar, mesh screen, PICTURES PICTURES Ole kukahi and Muku moon sprouts Muku moon sprouts Ole kukahi sprouts Sprout images Ole kukahi sprouts and muku sprouts Ole kukahi sprouts and muku sprouts 2017 ole kukahi sprouts less sprouted Muku sprouts more Sprout images Sprout images Muku moon sprouts Ole kukahi sprouts Amount of Sprouts Muku moon ole kukahi Amount of Sprouts Muku moon had more sprouts that sprouted and ole kukahi had less sprouts that sprouted Step 1,2,3, and 4 Step 1,2,3, and 4 Step 1: Gather all of your supplies Step 2: Get your jar and put seeds in it Step 3: Get your jar with seeds in it and fill it half way with water Step 4: Get your mesh screen put it on your jar then get the lid and put it on the mesh screen Steps 5, 6, 7, and 8 Steps 5, 6, 7, and 8 Step 5: You need to let the seeds sit for 8 hours Step 6: You need to drain it and rinse it 3 times then put new clean water in it Step 7: It needs to sit for 24 hrs then rinse then let it sit for 24 hrs again then rinse and 24 hrs then rinse and do those 2 things one more time Step 8: You need to make sure to rinse it then wash it 3 times so it is extra clean Steps 9 and 10 Steps 9 and 10 Step 9: When you are done with all those steps you need to count all the seeds you sprouted and didn't sprout Step 10: Put all the seeds that sprouted into a jar or zipbloc bag then put all the seeds that didn't sprout into the trash If we plant on Muku moon Phase the sprouts would probably turn out better then ole kukahi and ole kukahi sprouts will probably be worse then muku sprouts HYPOTHESIS HYPOTHESIS In conclusion , Growing, learning, Counting, and learning data was very fun to do. Conclusion Conclusion