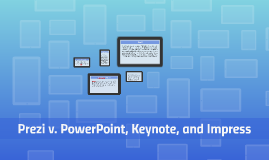 Transcript: There is not a one stop shop for presentation software. With that said, I believe Prezi is a great and fun way of creating and presenting presentations. The vibe of Prezi compared to others is certainly different. Personally, I would not pay money for Microsoft Office (which includes PowerPoint), but instead opt for the free options. A bonus is that MHCC offers Microsoft Office for free! Prezi v. PowerPoint, Keynote, and Impress Apple Keynote has spectacular animations, templates, and a simple to use interface. It is capable of importing, editing, and saving PowerPoint files. Although Apple Keynote only comes with Mac and iOS devices, with the power of the cloud, it is easily accessible across all devices (including Windows). This is a great offline solution to Prezi. OpenOffice Impress OpenOffice Impress is basically a copycat of PowerPoint. It has all of the features that PowerPoint offers, minus some templates. For free, there are not really any cons. The same cons that were said for PowerPoint can be said to Impress also. This is a great offline software solution, as it is free. From what one would expect, free does not come with anything fancy. When one stumbles across the word PowerPoint, an instant connection is made on what it is. This is mainly why it is so popular and widely used. When compared to Prezi, it looks dull and boring. Because of this, many people hate the idea of presentations being relied heavily on PowerPoint. There are many animations and templates, but it does not fare well when compared to Prezi. PowerPoints can be opened on any software. Microsoft PowerPoint Prezi Prezi incorporates what you call "fun" animations, templates, and user interface. This attracts a wide audience and retains the attention of many, whereas normal presentation software, most people would get bored of it. Since it is on the cloud, it can be accessed anywhere. In addition to that, collaboration is easy. However, one must pull out a credit card as a form of payment in order to gain more features, such as a control of privacy. Apple Keynote 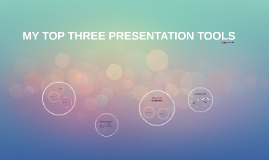 Transcript: MY TOP THREE PRESENTATION TOOLS Kaitlyn Swindle PROS PROS PREZI IS BY FAR MY NUMBER ONE GO TO FOR PRESENTATIONS, HOWEVER, KEYNOTE IS VERY SIMPLE FOR EVEN ELEMENTARY CHILDREN TO UNDERSTAND AND WORK WITH. -MULTIPLE TEMPLATE OPTIONS -MODERATELY EASY TO NAVIGATE -ONLINE VERSIONS AVAILABLE APPLE KEYNOTE CONS -MANY MAC USERS WILL NOT USE -OUTDATED -PURCHASE PRICE AS PART OF OFFICE SUITE -VERY USER FRIENDLY -MAC ALTERNATIVE TO POWERPOINT -MANY TEMPLATE OPTIONS -AVAILABLE TO SCHOOLS/KID FRIENDLY -THOUSANDS OF OPTIONS AND VARIATIONS WITHIN PRESENTATION -WIDE VARIETY OF TEMPLATES -FREE VERSION ONLINE -PRESENTATIONS CAN BE ACCESSED ANYWHERE -FREE TRIAL AVAILABLE MICROSOFT POWERPOINT PROS CONS PREZI CONS -CAN APPEAR CONFUSING OR BUSY TO SOME AUDIENCES -NO FREE TRIAL AVAILABLE -CAN BE DIFFICULT TO CONVERT FILES FROM POWERPOINT 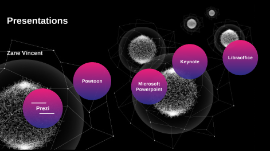 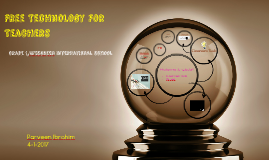 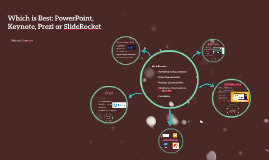 Which is best: Keynote, SlideRocket, Prezi, or PowerPoint? 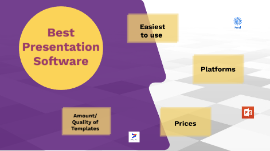 Transcript: Best Presentation Software Amount/Quality of Templates Easiest to Use Prezi has lots of how-to and introduction videos. Helps you make the best presentation. Easiest to use Powtoon Powtoon Instruction videos are hard to find on the website. Takes a long time to make one slide. PowerPoint PowerPoint Hard to find the right tools fast. Sometimes program is too slow. Platforms Prezi Has Windows Mac Cloud IOS Android Platforms Powtoon Platforms Powtoon Only Cloud PowerPoints Platforms PowerPoint Windows Mac Cloud IOS Android Prezi Prices Lowest plan is $4.92 per month. First month free. Prices Powtoon Prices Lowest price is $19 per month. First month is not free. Powtoon PowerPoint Prices PowerPoint Lowest plan is $5.99 per month. No free month included. Prezi Templates Has a lot of quality themes. Has over 1000 themes. Powtoon PowerPoint Templates PowerPoint Has alot of templates. Qualities are good. Powtoon Templates Does not have alot of templates. The ones the do have are very mainstream. 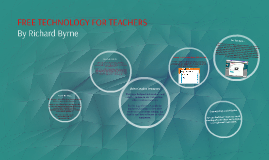 Transcript: About the blog... Nanoogo is a newer site designed to get kids interested in creative writing projects. . On Nanoogo students can write stories and add pictures and other clipart to their stories. The writing takes place on a blank canvas that students decorate: For Teachers... This blog share information about free resources that teachers can use in their classrooms. Every day Free Technology for Teachers provides teachers with free websites and resources that they can use in their classrooms such as- i-pad Apps, Free guides, Alternatives to you-tube, Video creation and more... Here are some of the options that I found useful and interesting for us.... Nanoogo has some excellent options for teachers. On Nanoogo teachers can create class groups and distribute writing prompts to students. Teachers have the power to create student accounts, maintain student identifications on the site, and re-set passwords. Writing prompts that teachers create can have an expiration date assigned to them. Teachers can log into their accounts to see what their students have created. Watch the video below for a complete overview of teacher side of Nanoogo This page designed to introduce and show you how to use various free video creation resources. In this page there is A guide for teachers who want to have their students create videos without the need to purchase software or video equipment. Video Creation Resources Creating cartoons and comic strips can be a good way to get reluctant writers writing. While creating comics you and your students can work through the elements of fiction in a context that is fun and familiar to them. "Witty Comics" provides a simple platform that students can use to create two character dialogues. To use Witty Comics students just need to select the pre-drawn background scenes and the pre-drawn characters they want to feature in their comics. Writing the dialogues is the creative element that is left to the students. Creating Blogs and Websites FREE TECHNOLOGY FOR TEACHERS By Richard Byrne Nanoogo - A Fun Creative Writing Platform for Kids You can find there resources about creating effective blogs and websites to complement instruction. Create Comics Online