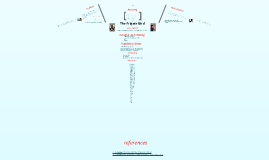 Transcript: The Frigate Bird Anatomy 3 feet in length wingspan over 7 ft in breeding season, males have a bright red throat pouch females have white throats and bellies has a long gray bill with a hooked tip deeply forked, scissor like tail and sharply pointed wings Habitat lives on ocean coasts and islands lives on mangrove islands during breeding season breeding season- coastal Fl. and tropical Atlantic and Pacific oceans non-breeding- coast of N.C. south to Fl. and west to Tx. They also live on sandy shores of California Reproduction males inflate red pouch to attract a mate females lay one egg in a nest built of sticks on land chick fledges about 5-6 months old female continues to feed the chick for another 4 months takes 50 days for the egg to hatch both parents incubate and feed the chick food sources small fish, squid, jellyfish, crustaceans, young turtles, birds, and eggs Behavior and Hunting exellent flyer and glider swoops and grabs chicks and other birds "pirates" What makes me a bird? hollow bones for flight beak feathers lay eggs two leggs- bipedal Population Status worldwide 500,000-1,000,000 few natural predators, humans are main predator introduced species of rats and domestic cats have been found hunting them and their eggs Adaptations Puffy red chest hooked bill tiny tarsi and unwebbed zygodactylous feet Interesting facts have been known to ride the wing for 12 days ride warm currents so they are a sign of warm weather can only take flight from trees or cliffs because of the large wing span are not very water repelent, they cannot get their wings wet and take off without difficulty references http://www.tropicalbirds.com/frigatebird.php http://www.nhptv.org/natureworks/magnificentfrigate.htm 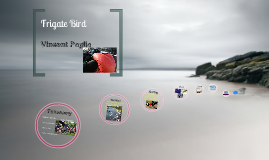 Transcript: takes 61 days to incubate babies get as few as one egg few survive which is making the population decrease Family- Fregatidae http://people.rit.edu/rhrsbi/GalapagosPages/Frigatebirds.html Parenting Taxonomy Frigate Birds are named after the Frigate (a boat) because of how they fly gracefully in the sky and their speed. Cool Facts http://www.iucnredlist.org/details/summary/106003845/0 http://www.animalopolisfilm.com/animals/sea_bird/index.html Works Cited Live mostly live on or near the ocean shore they live in the Atlantic or Pacific Tropics Move to different areas to breed Male Frigate birds wingspan can be about seven feet long. Phylum- Chordata Frigate Bird Class- Aves Males have an inflatable sac on their throat which they inflate over twenty minutes then wiggle their head and flap their wings. The females got to the male that they think has an appealing display. http://www.nhptv.org/natureworks/magnificentfrigate.htm Mating Order- Pelecaniformes Habitat Vincent Paglia Kingdom- Animalia Diet Frigate birds eat squid, jellyfish, and occasionally young sea birds. Frigate birds hunt for their food Frigate birds are carnivores Frigate birds can weigh three pounds The End 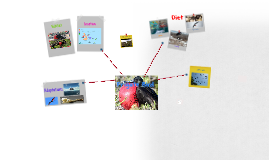 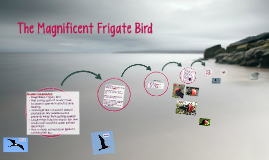 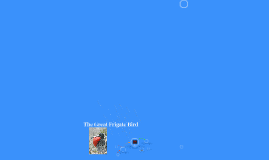 Transcript: Large black bird About three feet in length and has a wingspan of over seven feet. Males have a bright red throat pouch Females have white throats and bellies. Long gray bill with a hooked tip Deeply forked, scissor-like tail Sharply pointed wings 50,000 No natural predators Mongoose, cats and rats if introduced will prey on the young No. But since they are endemic and have one offspring, they have a very high risk VIDEOOOOOOOOO! Nesting Preferences They will have one offspring per mating season. If the egg is lost, the parents split The species is colonial, nesting in bushes and trees (and on the ground in the absence of vegetation) in colonies of up to several thousand pairs Great frigatebirds are seasonally monogamous a breeding season that can take two years from mating to the end of parental care Feathers Great Frigatebirds can be found across the warmer waters of the Pacific and Indian oceans, with much smaller numbers in the Atlantic Amazing Fact Physical Characteristics Iridescent black feathers Males have red under bellies and females have white Migration Most commonly they will eat flying fish Sometimes squid or other school fish They eat during flight Females will sometimes eat the young of seabirds Diet Predators They are able to blow air in a sac underneath their beaks Video The Great Frigate Bird Number of birds in the wild you ask? Endangered??? 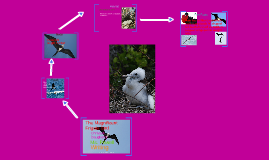 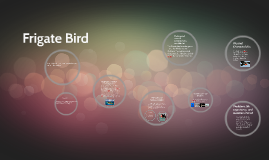 Transcript: Their geographic location is the Galapagos Islands Educator. Their adaptations are during outside breeding season the gular sac fades to orange and you can barely see it. Their feathers arent water proof so they cant sit on water for more than 2 minutes. They cant move properly on land cant get in the water so they have to fly most times. Their bbig wings allow them to steal food from the other birds and they fly during strong winds. Population The Frigate birds are thought to be decreasing across their range because of habitat destruction and human disturbance at nesting sites. Frigate birds mainly only socialize when mating. When the Frigate birds are mating the males blow pout their red gull-like sac to attract the females. Scientific name and diet/prey The Frigate bird cant walk on land or get wet and they live in Australia off of the coast. Their habitat is nests in trees but humans and deforestation is destroying their homes. Endangered, unusual characteristics, and Habitat Physical Characteristics Predators, life expectancy, and Gestation Period Physical Land Features/habitat The male has a gullar-like sac under its throat and the female is black with white underneath. They both have silky feathers. The Frigate birds life expectancy is 15-25 years and their predators are; Humans, Rats, and Cats and their gestation period is 9 months. Socialization Coast of Australia Geographic Location and Adaptations The Frigates bird scientific name is the Fregata. The Frigate bird's diet is; Fish, Squid, Jellyfish, and occasionally seabirds. http://www.arkive.org/great-frigatebird/fregata-minor/video-00.html The Frigate bird is endangered. They live off the coast in Australia. The main unusual characteristic of the bird is their gullar-like sac under their chin. Frigate Bird 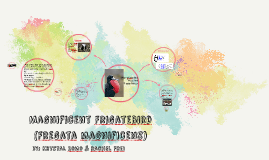 Transcript: -Courtship occurs between August and October -Males gather in groups and do a multitude of behaviors to attract females. -Females build while males gather -One egg is laid -Parental care differs between male and female Frigate Birds. -Only seabirds known on which sexes breed on cycles of different lengths BY: Krystal Romo & rachel Frei -Wing span allows them to stay flying for extended periods of time. -Little need for wing flapping. -Effortless flight allows for long distances to be covered with minimal energetic cost. -Mozambique Channel Study ( Henri et. al 2004) Info Sources Male vs Female - Large species of Sea Bird found across all tropical and subtropical oceans -Unable to to walk well; has short legs and very small feet causing awkward movement on land -Unable to swim, which directly affects its choice of diet - Their plumage lacks a waterproof coating -Color: Black, White, Brown, Red -Lifespan: 15-25 years -Wing span- 150cm - 250cm (59in - 98in) - Lifestyle: Colony -Male: entirely black plumage, glossed green on the head, with bare patch of skin on lower chest, known as the gular sac. -Can be inflated into bright red balloon-like an organ. -Female: larger than Male -white patch across breast and upper belly, entirely white head then black. -lacks gular sac, and has less glossy, brownish-black plummage Kingdom: Animalia Phylum: Chordata Class: Aves Order: Pelecaniformes Family: Fregatidae Genus: Fregata Threats Diet Fun Facts Habitat Habitat -Found in tropical oceans and coincides with the trade winds. -They breed on strands of mangroves on coral reefs, bushes on dry islands, and along coasts. *Man-O'War-Bird *Pirate Bird *Frigate Pelican Classification Magnificent FrigateBird (Fregata magnificens) Taxnomy Conservation -Relatively large population and is not currently considered to be globally threatened -As a result of human disturbance, habitat loss and the introduction of non-native predators, several historic colonies have been wiped out. -Losses have been most severe in the Caribbean, where an estimated 50 percent of the colonies have been destroyed. - There heavy reliance on food brought to the surface by underwater predators such as dolphin and tuna, which are themselves being driven to extinction, could have serious consequences for this species -Carnivorous -Airborne flying fish, squid, jellyfish, small sea turtles, tiny molluscs and scraps discarded by boats -Sometimes they harass other bird species -Kleptoparasitic Study (Vickery & Brooke 1994) -Their predators consist of cats, rats, and predominantly humans Who is this Bird? Image sources https://www.allaboutbirds.org/guide/Magnificent_Frigatebird/id http://tolweb.org/Fregatidae http://science.sciencemag.org/content/320/5884/1763http://www.arkive.org/magnificent-frigatebird/fregata-magnificens/ Vickery J. A, Brooke M. L. (1994) The Kleptoparasitic Interactions Between Great Frigatebirds and Masked Boobies on Henderson Island, South Pacific. The Condor 331-40. doi:10.2307/1369318 Weimerskirch H., Corre M., Jaquemet S. (2004) Foraging strategy of a top predator in tropical water: great frigate birds in the Mozambique Channel. Marine Ecology Progress Series. 297-308. doi:10.3354/meps275297 Breeding Behavior Biology -Many magnificent frigatebird colonies are protected by written laws, but rarely enforced. - There is a lack of funds, colonies are not patrolled -No method to punish those breaking the law -Improved protection and enforcement of existing laws, particularly in the Caribbean colonies, is therefore necessary to ensure the survival of this remarkable bird -Largest species of Frigate Bird -Frigatebirds are the only seabirds where the male and female look strikingly different -Charles Darwin dubbed this species “the condor of the ocean” http://www.mountainsoftravelphotos.com/Galapagos%20Islands/Day%202/slides/Galapagos%202-1-14%20North%20Seymour%20Young%20Frigatebird.html https://www.bing.com/images/search?q=frigate+birds&view=detailv2&&id=D2B0B91709CC1602784B0EA41211DC3B4ED2AC44&selectedIndex=8&ccid=GjORf4Yy&simid=608007687488799067&thid=OIP.M1a33917f8632db41187ea200832d183co0&ajaxhist=0 https://rollingharbour.com/tag/frigatebird-male/