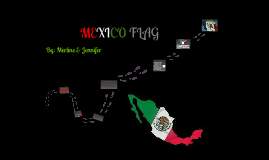 Transcript: The Mexico's flag has change over the years. The flag had the same colors but different position and designs of the eagle. Since 1821-1969. What Does The Mexico Flag Colors Mean? Eagle-arted legend the people were According to Aztec legend the people were wandering in Mexico in search of a sign that their god, Huitzilopochtli, had given them. He commanded them to find a Crested Caracara perched on top of a cactus, devouring a snake. After two hundred years of wandering, they found the promised sign on a small island in the Lake Texcoco. Their search and wandering ended and they founded their new capital, Tenochtitl. MEXICO FLAG Color: Green: Hope, Joy and Love. Also green has scared significance White: Peace, Honesty, and Unity Red: Hardiness, Bravery, Strength, and Valour the blood of heroes www.flags-flags-flags.org.uk When It Was Made Mexico Flag? The Government: Colors: Green: hope ,joy and love and in many cultures have a sacred significance. White: peace and honest . Has The Mexico Flag Change In The Past? Symbols What Does The Color Symbolize Red: hardiness,bravery,strength&valour The national flag was created in 1821 and adopted by the “Army of Three Guarantees,” which took its name from the guarantees of religion, independence and union promised by the Plan of Iguala. Later, in 1823, Congress decreed that the emblem on the flag should conform to the indigenous myth: an eagle in profile perched on a cactus, eating a snake. The national seal was first added during Maximilian’s rule, when a flag bearing the eagle under the crown of the French empire was adopted. Porfirio Diaz subsequently ordered that the eagle on the seal be shown facing forwards with its wings extended. Later, under Venustiano Carranza, it was modified again: the eagle is now shown in left profile and reflects the Mexica legend of the founding of Tenochtitlan . . The Mexican Coat of Arms is as follows perched on a bird caracara standing on a cactus has a snake in it's mouth. Is the white band according to ancient and heraldic traditional much symbolize is associated with the color on Mexican flag represent honesty in many cultures have sacred is a basic style shown in the picture of the mexican flag is described as border emblem reflecting The central design of the flag pattern.The flag with red and green, showing the eagle in the middle was first used in 1821, although it looked a little different than the current design. They were told that when they saw a [Mexican] Eagle perched on a Nopal cactus with a serpent (rattle snake) in its talon, located on an island, this is where they should begin to build their permanent city. They supposedly did encounter this on an island in the middle of a lake (Lake Anáhuac) now known today as México City. What Does The Flag Mean? Mexico Flag The Mexican government is a representative government with the technical term being a federal republic . It has a constitution which provides rules and power to the federal district. The constitution describes the responsibilities and power assigned to three branches of federal , executive ,legislative and judicial. The president is head of executive branch and arms forces and is also the nominal head of country approve spending and budget. By: Merline & Jennifer 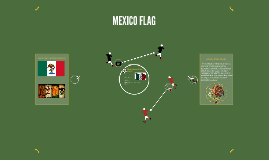 Transcript: MEXICO FLAG One of the most important day were the Mexican rise the flag is in the Independence Day that is in September 16 THANK YOU!!! What represent the colors? The national emblem of Mexico is inspired by the legend of the foundation of Mexico-Tenochtitlan which basically says that God Huitzilopotchli told the Mexican to establish their city where they found an eagle perched on a cactus devouring a snake Pictures of The flag in ceremonies. Some types of flag of Mexico GREN:Hope WHITE:Unit RED:The blood of the national Heroes History of the shield. The Flag in the Zocalo 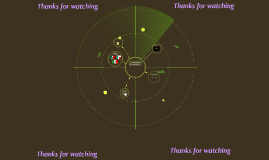 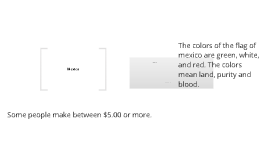 Transcript: The colors of the flag of mexico are green, white, and red. The colors mean land, purity and blood. (cc) image by quoimedia on Flickr Some people make between $5.00 or more. Mexico (cc) image by rocketboom on Flickr 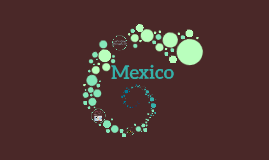 Transcript: These are some facts about Mexico's capital(Mexico City).Mexico city is located near Puebla,Teotihuacan, and Guadalajara. This is my Mexico Presentation I hope you liked it.Mexico was a very tropical place which was my favorite part about my country Mexico. Language Mexico Animals Their are so many people in Mexico who mostly speak spanish some people might speak english but most likely not. Plants There are many plants in Mexico but the one that is the most common is the mango tree. Women in Mexico do a special kind of dancing like this ones blow. Hurt animals Mexico City Dancing to the beat Mexico Flag These are some of the most common animals in Mexico .There are also some hurt animals like the one below. Mexico This is the Mexico Flag : 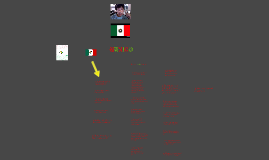 Transcript: MEXICO Unusual Facts Mexico 1. The real name of Mexico is Estados Unidos Mexicanos. 2. Mexico introduced Chocolate and corn plus chillies to the world. Believe me they liked the chocolate idea because how would you react if there was no chocolate in the world. 3. Mexico has a rare rabbit it's name is the Volcano rabbit it lives oubvously by only mexican volcanoes. 4. More than a million Monarch butterflies migrate to Mexico each year. 5. The mexican U.S. border is the second Largest border in the world that is amazing. 6. The kids in Mexico do not get presents on christmas day they get them on January 2 becuase that is when the three wise men arrived there. 8. The chihuahua is one of the smallest dogs in the world and it is named after a mexican state. 9. Mexico city is the highest elevation level and it is the biggest city in the world plus the oldest city in north America. 10. The red poinsettia was fund in Mexico. It is named after Joel Roberts Poinsett. 11. Mexico is the 14th biggest country in the world in area. 12. Before 1958 woman where notaloud to vote for anything at all. 13. One of the Mexican pyramid's is named Chichin Itza it is named one of the 7 wonders. 14. Bullfighting is one of the national sports in Mexico it is very dangorous. 15. Mexico stayed spanish for 300 years. 1. The thing in the middle of the Mexican flag is the Mexican cote of arms. 2. The populaation of Mexico City is 8,841,916. 3. 19,24 N and 99.09 W That is the latitude and lognitude of Mexico city. 4. The biggest city in Mexico is Mexico City it is huge. 5. In Mexico the climate is hot and humid all the time. 6. The legal drinking age in Mexico is 18 years old. 7. Mexico is right in the middle of the ring of fire wich means in the earths worst volcano zones. 8. The chihuahua is one of the smallest dogs in the world and is named after a mexican state.