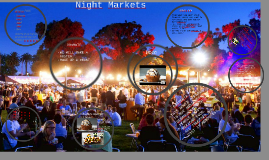 Transcript: PROMOTE Devontae Lopeti Judah Alana Ruta Mexican Fiesta TACO BOATS How we are going to deliver it Night Markets THIS IS HOW IT'S GOING TO LOOK LIKE. CHURRO ICE CREAM BOWL SOFT TACOS ALUMINIUM FOIL PINTO BEANS MINCE TOMATOES TACO/FAJITA SEASONING ONIONS GRATED CHEESE SOUR CREAM LETTUCE CUCUMBER TACO BOATS FROM WHAT YOU HAVE HEARD FROM US. WOULD YOU COME TO OUR STALL AND BUY ONE OF OUR PRODUCTS? IF THERE IS ANYTHING WE COULD DO DIFFERENTLY; WHAT WOULD IT BE? DO YOU THINK OUR PRODUCTS WILL SELL? VIDEO COST $8.00 1/4 CUP OF BUTTER 2 Tbsp BROWN SUGAR 1/2 tsp SALT 1 CUP OF WATER 1 CUP OF FLOUR 1 tsp VANILLA ESSENCE 4 EGGS FRENCH VANILLA ICE CREAM TOPPINGS(CARAMEL SYRUP AND CHOCOLATE SYRUP COST $45.00 IN WEEK 10 ON THE 6TH OF APRIL WE WILL BE HAVING A NIGHTMARKET. WE WILL MAKE A POSTER MAKE UP A CHANT THIS WOULD APPEAL TO OUR AUDIENCE BECAUSE LOTS OF PEOPLE ENJOY MEXICAN FOOD. ALL TOGETHER OUR COST IS ABOUT $53. OUR IDEA IS THAT WE WILL HAVE OPTIONS/INGREDIENTS OUT AND THE PEOPLE CAN CHOOSE WHAT THEY WANT IN THERE TACO BOATS INSTEAD OF US CHOOSING FOR THEM. CHURRO ICE CREAM BOWL AND HERES WHAT WE ARE DOING QUESTIONS THIS WOULD APPEAL BECAUSE LOTS OF PEOPLE ENJOY MEXICAN FOOD CRITERIA 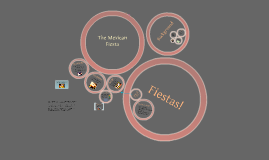 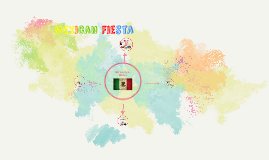 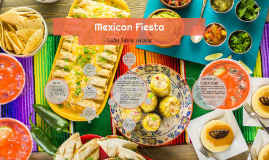 Transcript: Manliness & virility , it is important for men to exhibit masculinity & stoicism at all times & to show that they aren't afraid of death If a man has insecurities it is due to the betrayal of a women, but the "macho man" must protect themselves from it it is common for most Mexicans to want to spend their time with people of the same sex Mexicans seek security but can be introspective fiestas provide an emotional outlet, or release that is not found anywhere There are numerous religious fiestas amongst Mexico, these give participants a way to communicate with God Carnival :is one of the biggest that is celebrated before Lent Our Lady of Guadalupe: celebrates the anniversary of the day Virgin Mary appeared on the hill of Tepeyac Family fiestas of the rite of passage Quinceanera Education & Training State of Chipas , place of revolutionary activities, has pagan ceremonies which can be alluring & frightening to outsiders Other places only eat, sing, dance & drink, leaving religious meanings behind Some traditions have faded, many traditions have been discarded 3."EXPERIENCING THE PRESENT" nonverbal communication is important gestures, facial expressions, glances, posture, & clothing reveal important facets greetings take a long time, full of hugs, kisses, handshakes & pats on backs men greet each other with abrazo women kiss each others cheeks use hands to illustrate & emphasize their conversation allusions & double meanings are good the langueage says more than it means schools have emphasized theoretical concepts & social competence careers in philosophy, science & the arts are important compared to other careers In some jobs they may be trained in subordinates such as in their tendency to be agreeable & not to question authority THE MEXICAN FIESTA Mexican fiestas is the country fiesta, the more remote & difficult it is to get there the more attractive the celebration the simple life is experienced through: indigenous, native dances in beautiful costumes gives Mexicans to enlive & enhance their existence Fiestas are full of humor, energy, costumes, language, bustling activity, & aimless walking around The state if Oaxaca has fiestas with tall castillos of native fireworks people share grace, calm & worldliness In 2010 México celebrated their 200th anniversary of the beginning of their struggles from Spanish domination Since 2006 their government has been actively fighting the drug cartel, over 60,000 citizens & as many as 90,000 people have been killed in this violence ruled by relationships -ito & -ita minimize problem to save face high need for uncertainty avoidance, feel threatened by uncertain situations & strangers Mexicans tend to hire friends & family over strangers no matter the qualifications not loyal to the organization but the people within it important to protect soul, dignity, honor View people as a mix of good & evil due to the grey area between truth & lies Mexicans know how to find happiness in even a difficult life Fiestas are the times for mexicans to find joy They work hard so they can also value leisure They tend to de-emphasize the future, each day is taken as it comes, & this is due to the unstable economy Believe that life is beyond their control si Dios nos presta el tiempo "if God lends us the time" they tend to share a attitude by exhibiting a fascination with death Day of the Deads / All Souls Day honors and remember the dead The number of official Fiestas varies between 500-600 a year Fiestas celebrate historical events; reinforces tradition of towns, cities, and states; honor Catholic Saints & practices; pay homage to special foods & crops in particular regions; and recognize holidays, birthdays, baptism, weddings & graduations NOT AS SEEN ON TV ON IN POP CULTURE NOT A BIG BLOCK PARTY 4. SOCIAL ORDER 1. PEOPLE FACTS " Mexico beautiful and beloved If I die far from you Tell me I am sleeping And bring me back here" What God Wills Communication Style People are important to culture a fiesta is the time to enjoy family & friends, fiestas also unit people Family members do as much as they can for their families & friends are treated like family once trusted Collectivists have tight social framework, people in authority look after others for loyalty authority ranking/ vertical collectivists but paternalistic culture by the border of U.S. there is increasing levels of individualism good amount of social distance HISTORY Mexican Fiesta CONT. 2. RELIGION 1519: Cortes arrived & Mexico was populated by hundreds of indigenous tribes such as; Aztecs, Incas & Mayas took 2 years for Cortes to conquer in the name of Spain 1810-1820: Victory over Spain in the War of Independence, their period of independence & turmoil lasted 100 years 1920: Mexican revolution ended after 10 years of fighting the presidential elections began Five region of Mexico 1) Northern Border 2) Central Region 3) Southeast region 4) Mexico City 5) areas along the Gulf Finding Happiness CONTINUED Relationship Julia Marie 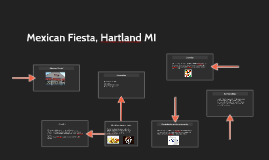 Transcript: Mexican Fiesta is located right in the middle of Hartland. It's at the corner of M-59 and Old US 23. It is easy located for all of Hartland and cities around Hartland to come enjoy the great Mexican food! Contribution to the community Sustainability Why Chose Mexican Fiesta? Mexican Fiesta! Mexican Fiesta, Hartland MI Paper napkins to cloth New chairs New cases for their menus Plastic cups to glass cups Fiesta opened with 2 people, Sam and Frances Alvarado, dreams of owning a mexican restaurant to serve their friends and family. The first Mexican Fiesta opened in 1963 in Dearborn Heights. Mexican Fiesta in Hartland opened in 2007, and is the 2nd location. Mexican Fiesta has been serving their customers for more than 50 years. It all started out as a local business and is still growing to bigger cities. Fiesta is catering to customers week days 11am - 9pm, and weekends 11am- 10pm. Growth They have a passion to keep their customers satisfied. They want to keep the mexican food tradition running and showing the community how great their service and food are. Location Fiesta is a huge contribution to Hartland's community. Most of the employees who are employed or have been employed at Fiesta are from the Hartland/Livingston County Area. Innovation 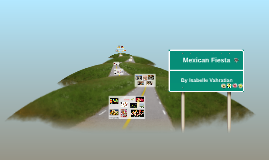 Transcript: glebe town hall room decorations mexican dancers as well as an amazing dj By Isabelle Vahratian traditional mexican outfit table and room decorations table and seating arrangments location room decorations= $1528.82 hall hire (including security)= $1160 caterer outfits= $1440 table decorations= $476 food= $3200 beverage= $2790 entertainment (including dj and dancers) =$ 1272 cutlery= $870.55 total= $12 706 catering staff outfits mexican fiesta table decorations the tables will be scattered around the place and the buffet will be in the back of the hall away from everything else. Cutlery were hired from youreventsolution.com food and beverage menu Mexican Fiesta Theme mexican fiesta details for all equipment entertainment for evening 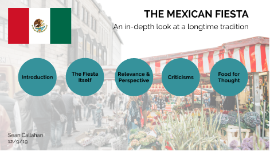 Transcript: Sean Callahan 12/9/19 An in-depth look at a longtime tradition THE MEXICAN FIESTA Three distinctive cultures: Indian, Spanish, and mixed (mestizo) Spanish is the national language, English is also a prominent language Their culture is a blend of different traditions, peoples, arts & realities A little bit about Mexico... Introduction History Used to be exploited by foreign entities since the 1500's (Spaniards, the Catholic Church, etc) Mexican peoples believe that hardship is a core part of many of their traditions Fiestas are meant to be a way of relief from those said hardships History Overview The Fiesta Itself What is a fiesta? Mexican way of "enjoying the simple pleasures of life" Lots of traditional foods, dances, and attire Can celebrate culture, get intoxicated, or both! "A release that is not found elsewhere" Oaxaca- Music, food, fireworks, castillos, dancing, costumes- sometimes interrupts Holy Week Chiapas- Hosts pagan rituals during their fiestas. They can be described as both "alluring, yet frightening" Traditions Some Interesting Fiesta Traditions Variations More emphasis on partying than connecting with family and culture Celebrated for improper reasons Could come off as insulting Americanized "Fiestas" Americanized "Fiestas" Relevance & Perspective Why are fiestas important? The embodiment of Mexican culture While some foreigners may call it "being lazy," fiestas boost morale and provide a sense of community/cultural pride Provides an extensive look into Mexican traditions and values Mission in the Sun, mission damaged by fire in May 2017 Fiesta de Guadalupe, Roman Catholic holiday Artwork, furniture, and other prominent religious artifacts were damaged Decided to hold fiesta at the mission to celebrate what they have/had. Embodies the spirit of the Mexican fiesta DeGrazia Gallery in Tuscon, AZ reopens burnt mission for Fiesta de Guadalupe American Article Article centered around alcohol- taste, ABV, availability, benefits, etc Warns the public of a possible uptick in shoplifting and other crimes Doesn't really talk about the importance of fiestas in Mexican culture. Probably implied everyone already has a common understanding of what it represents Viva Mexico: time for Fiestas Patrias Mexican Article Descriptive- Party, celebration, social occasion, may or may not be religiously affiliated Interpretive- Excuse to party and get drunk. Rowdy, crowded, noisy, etc. Critical- Practice of releasing stress, celebrating culture, and dealing with life's realities Criticisms Criticisms Food for Thought A couple questions... In what ways do you think fiestas improve the fabric of Mexican society? Would you say other cultures/social groups have their own forms of fiestas? If so, why do you think that is? https://mexiconewsdaily.com/mexicolife/viva-mexico-time-celebrate/ https://www.tucsonlocalmedia.com/news/article_5a81cf36-15ea-11ea-8cb9-9f15cf00bd1f.html The Mexican Fiesta article Works Cited Works Cited