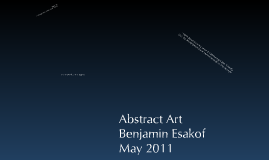 Transcript: Abstract Art Benjamin Esakof May 2011 So, what is Abstarct Art? Absract Art is a way of expressing your thoughts, while not representing anything in reality. In other words, anything goes. Abstract Art, or Abstraction Art, was created during the 19th Century, and still continues to wow the artist world today. One of my favorite Abstract Artists of this time is Mary Capan. 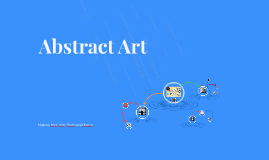 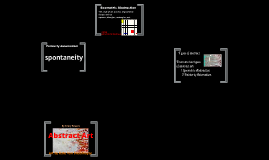 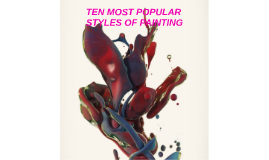 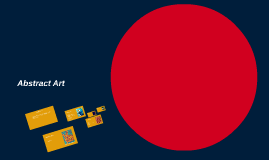 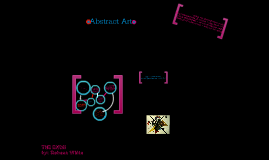 Transcript: Abstract art uses a visual language of form, color and line to create a composition which may exist with a degree of independence from visual references in the world. Abstract art has been used since the Renaissance up to today. 1850 - 1907 : Philosophical debate puts into question the established values of classical art. 1905 - 1915 : Pablo Picasso and Georges Braques create cubism and Henri Matisse's fauvism serves as a bridge between post-impressionism and expressionism. Before the advent of cubism, Picasso's 1907 painting Les Demoisselles d'Avignon already inspires many artists to abstractism (Kandinsky, Léger). 1910 : First signs of pure abstract art Kandinsky, Mondrian 1912 - 1925 : Piet Mondrian and Russian abstract artists, led by Kasimir Malevich's suprematism and Vladimir Tatlin's constructivism, complete the creation of pure abstract art. Modigliani sets benchmark for abstract portraitism 1945 - 1960 : Painterly automatism becomes more radical in abstract expressionism and art informel, while some artists combine automatism with geometric abstraction (Rothko). 1960 - 1980 : Introduction of abstract art with design characteristics, as in Op Art, Pop Art and contemporary geometric abstraction 1980 - NOW : Postmodernism - artistic inability to innovate or lack of social acceptance of innovation? Abstract art also known as pop art, is realy popular THE END!! by: Rebeca White Abstract Art (cc) image by nuonsolarteam on Flickr 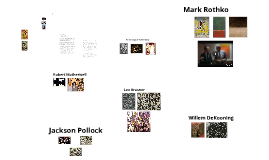 Transcript: "Do not copy nature too much. Art is an abstraction." Paul Gauguin (1848-1903), French Post-Impressionist "Objective painting is not good painting unless it is good in the abstract sense. A hill or tree cannot make a good painting just because it is a hill or tree. It is lines and colors put together so that they may say something." Georgia O'Keef (1887-1986), American Painter I’m not an abstractionist. I’m not interested in the relationship of color or form or anything else. I’m interested only in expressing basic human emotions: tragedy, ecstasy, doom, and so on. Mark Rothko (Latvian born Abstract Expressionist painter) what is Abstract Art? As defined by Artlex...Imagery which departs from representational accuracy to a variable range of possible degrees, for some reason other than verismilitude (the act of being). "All painting-the painting of the past as well as of the present-shows us that it is essential plastic means were only lines and color." Piet Mondrian (Neoplasticist painter) "It is a widely accepted notion among painters that it does not matter what one paints as long as it is well painted. This is the essence of academicism. There is no such thing as good painting about nothing." Mark Rothko "The more horrifying the world becomes, the more art becomes abstract" Paul Klee (Swiss painter 1879-1940) "Art washes away from the soul the dust of everyday life" (Spanish painter, Pablo Picasso, 1881-1973) Cubism The Art History Archive - Art Movements By Charles Alexander Moffat Definition of Style & Subject Matter: Cubism was a highly influential visual arts style of the 20th century that was created principally by the painters Pablo Picasso and Georges Braque in Paris between 1907 and 1914. The Cubist style emphasized the flat, two-dimensional surface of the picture plane, rejecting the traditional techniques of perspective, foreshortening, modeling, and chiaroscuro and refuting time-honoured theories of art as the imitation of nature. Cubist painters were not bound to copying form, texture, colour, and space; instead, they presented a new reality in paintings that depicted radically fragmented objects, whose several sides were seen simultaneously. Typical cubist paintings frequently show letters, musical instruments, bottles, pitchers, glasses, newspapers, still lifes, and the human face and figure. The Name: Cubism derived its name from remarks that were made by the painter Henri Matisse and the critic Louis Vauxcelles, who derisively described Braque's 1908 work "Houses at L'Estaque" as composed of cubes. In Braque's work, the volumes of the houses, the cylindrical forms of the trees, and the tan-and-green colour scheme are reminiscent of Paul Cézanne's landscapes, which deeply inspired the Cubists in their first stage of development, until 1909. It was "Les Demoiselles d'Avignon", a work painted by Picasso in 1907, that forecast the new style; in this work, the forms of five female nudes became fractured, angular shapes. As in Cézanne's art, perspective was rendered by means of colour, the warm reddish browns advancing and the cool blues receding. Braque's "Houses at L'Estaque" Picasso's "Les Demoiselles d'Avignon" Cezanne's "Victor Chocquet" Synthetic Cubism: Interest in the above subject matter continued after 1912, during the phase called Synthetic Cubism. Works of this phase emphasize the combination, or synthesis, of forms in the picture. Colour is extremely important in the pieces' shapes because they become larger and more decorative. Smooth and rough surfaces are contrasted with one another; and frequently non-painted objects such as newspapers or tobacco wrappers, are pasted on the canvas in combination with painted areas. This collage technique emphasizes the differences in texture and poses the question of what is reality and what is illusion in painting. Georges Braque: Born on May 13th, 1882, Georges Braque received his training at the local art school in Le Havre. From 1902 to 1904 Braque went to Paris to study at the Academie Humbert and then at the Ecole des Beaux-Arts (School of Fine Arts) in the studio of Leon Bonnat. Braque's early works, those of 1903-05, were executed in the mood of early impressionism. Greatly influenced by André Derain, Henri Matisse, and Maurice de Vlaminck, Braque entered (1906 or 1907) his Fauve period, in which he used soft undulating patterns and brilliant colors. Unlike the other Fauves, however, he showed an interest in architectonic solidity of composition and an emphasis on strongly defined volumes rather than color and brushwork. A crucial change in Braque's art came in the fall 1907, when he rediscovered Paul Cézanne at the memorial exhibitions at the Salon d'Automne and the Bernheim-Jeune Gallery. At this time, he also met Picasso. In the late work of Cézanne, both Braque and Picasso saw a new geometrization of form and new spatial relationships that were to become the basis of cubism. Spurred by his close association with Picasso, whose "Les