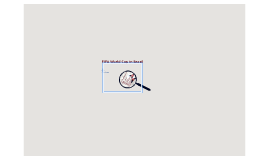 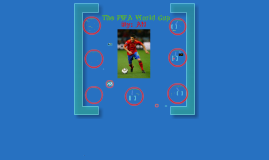 Transcript: the actual cup is named after Jules Rimet fifa gives a new trophy to the winning team every year Fifa is short for Federation Internationle de Futboll the fifa world cup first took place in 1930 the first goal scored in the world cup was made by Franz Beckenbauer Founded in Paris, France May 21, 1904 The Brazilian national team has won five fifa world cup titles Italy who have an MVP goaly, are great at defesne Zinidan Zidane is a tactic of the frence national team Cryff played for holland and was a stand out Pele who played for Brazil was super good and won many titles Germany is a great soccer team who have a great team striker Messi who plays for argentina national team is great and is ranked #1 best player in the world cup There have been 19 world cups already the first HD matches on TV were programed in 2002 the first world cups were in black and white on television About 120 million people watch at least a minute of a world cup match world war 2 had an impact on the world cup. Because of this the 1942 and 1946 wrold cups didn't happen at all The next world cup will be hosted by Brazil 1. When in the tournament teams have to win as many games as they can the good teams and players are stand outs 2. Teams that make it to the knock out round have to win to move on. If they lose they go home. 3. After knock out round is the final 8 where teams play in the quarterfinals 4. the teams that win the quarterfinals get in the final 4. the games in the final 4 are called semifinals 5. Now the of the winners of the semi finnals will play in the finals people say that world cup matches are the most entertaining the world cup is the most watched tournament in the world it is an international soccer tournament 1. Teams plays tons of games 2. Over 100 teams qualify 3. Only 32 make it to the tournament 4. Teams try to win as many games as possible Do reffs have to follow rules? Yes Reffs do have to follow rules 1. A referee reffs games by following rules 2. Referees in the world cup are very strict 3. They have to have the right gear 4.Yellow and red cards either mean sent off or warning This is David Villa This is the official fifa sign This is David Becham This was the 2010 world cup ball This is Lionell Messi This is Jules Rimet Brazil has won five world cups the most out of any team Italy has won the second most, 4 Germany has won 3 titles Uraguay has won at least 2 titles Argentina has won at least 2 titles France has won a title recently in 2002 England has 1 title Finally, Spain won the most recent title in 2010 this concludes my prezi The End the road to the finals is a long journey Spain has won 1 world cup and that was in 2010 By: AH Qualification Rounds This is the Brazil emblom 2. Mr. Rimet had a french carver make a trophy from pure gold Brazil is a good team Italy has won 4 world cups in 1938, 1934, 2006, 1982 Happening all over the world, this is a big part of a teams chance to get into the actual ternament The FIFA World Cup Some years the good teams may lose and the worse teams may win History The Road to the Finals Fun Facts Icons to Look For Stars and great teams Referees About the world cup this is a referee World Cup Winners Pictures How to get to the Finals? 1. The Jules rimet trophy was names after the founder of the world cup The World Cup Winners 3. Every year a new trophy is made with pure gold for the champoins the cup is made by pure gold The Jules Rimet trophy this event happens almost evey where on the globe How Qualifying Works? Rules of the Tournament Brazil The end!!!!

Transcript: Their Promise Associations Qualifications History Their Mission What is World Cup? FIFA World Cup For The Game. For the World. Their Approach 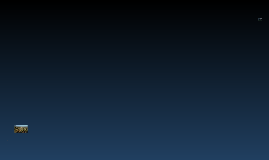 Transcript: Fifa World Cup is an internatinal association football competition by the men's national teams of the member of federation associated with Fifa. Over One hundred countries participate in this event. The championship has been awarded every four years since the first tournament in 1930, expect in 1942 and 1946 beacuse of the Second World War. The world cup is the world's most widely viewed sporting event, 715.1 million people watched the final match of the 2006 fifa world cup held in Germany. During the 19 tournaments that have held the tournament, eight national have won the the title. Brazil 5 titles Italy 4 titles Germany 3 titles Argentina 2 titles Uruguay 2 titles England 1 title France 1 title Spain 1 title FIFA's mission is to "Develop the world. Touch the world. Bulid a better future.'' Country's that have held the finals: Uruguay Italy France Brazil Switzerland Sweden Chile England Mexico Argentina Spain U.S.A South Korea and Japan Germany South Africa 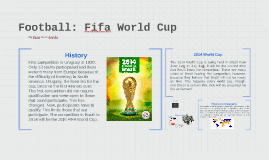 Transcript: Football has been a bonding activity across cultures, languages, and people. Relation to Geography Fans Football: Fifa World Cup First competition in Uruguay in 1930. Only 13 teams participated and there weren't many from Europe because of the difficulty of traveling to South America. Uruguay, the favorites for the cup, became the first winners ever. The first competition did not require qualification and were open to those that could participate. This has changed. Now, participators have to qualify. This limits those that are participate. The competition in Brazil in 2014 will be the 20th FIFA World Cup. Geography and the impact of geography can be seen in the countries which qualify for the competition. Most of the countries are from Latin America, Europe, and Northwestern Africa. Countries in the periphery such as Canada, Asia, and the majority of Africa, do not have the climate to play football, or the funds. The 2014 World Cup is being held in Brazil from June 12th to July 13th. It will be the second time that Brazil hosts the competition. There are many critics of Brazil hosting the competition, however, because they believe that Brazil will not be ready on time. This happens every world cup, though, and Brazil is certain that they will be prepared for the excitement. By Brisa Diaz-Zorrilla Epic Goals Effect on Culture 2014 World Cup Football is life. Sponsors 2:52-5:48 History 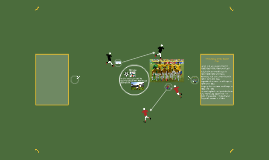 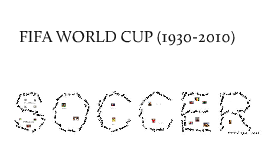 Transcript: FIFA WORLD CUP (1930-2010) First FIFA 1930 FIFA 2010 ASSESSMENT If you were part of your country's soccer team and in the next world cup, how would you deal with the pressure of going to a foreign country to participate in a tournament that will be broadcasted worldwide? newly famous mexican player How it brought countries together How it compared from then to now How has it changed widely famous U.S. player Cristiano- Real Madrid Ronaldinho- Brazil Kaka- Brazil Messi- Barcelona 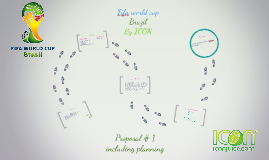 Transcript: Bigger prices can be won with the campaign. ( picture ? / FIFA= .... to me. + all the April activities. this team oversees the whole project they know exactly watch the entire team is doing and how the developments are proceeding Overseers Promotion Team Conclusion Intensive Facebook marketing Visit events with give away items App goes Viral lots of campaigns combined with big sponsors give away items News conference ( the lancing of the product / preview of the app) key invitees Order promotional Items / Give away with sponsor logo. Facebook Team Sales team Teams that need to be formed Intensive sales of the app Jan 2014 November 2013 Develop App June- July 2014 Start slow promotions Approach platinum sponsors Yes we are ready to make a Fricking statement !! Platinum locations will be visited by Icon team during breaks with awesome prices. Platinum sponsors will be mentioned during these visits ( also will take charge of the promotional items) Facebook team will keep everyone up to date. with extra information. Pictures of happy hours will be posted on the Facebook on the final night car will be raffled March 2014 October 2013 Mei 2013 Fifa world cup Brazil By ICON The App has tree (3) different aspects : Scoreboard (with option: auto fill/ Manual) Location where the game can be seen. Promotion from third parties Content The Facebook team has to constantly promote and update information on FIFA 2014 there have to be 2 teams one for Aruba and one for Curacao yet the collaboration between both parties is essential. so there will be a team leader who is in charge of the communication The sales team is in charge of selling the product to as many companies / sponsors as possible. December 2013 Proposal # 1 including planning April 2014 the promotion team will be in charge of the visits done to the locations. they will be distributing the products . and be present and third party events to promote the App February 2014 Planning Develop complete plan Ask for offers Make budget Develop promotion packages