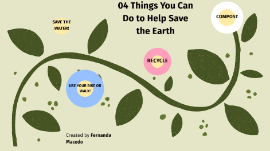 Transcript: 04 Things You Can Do to Help Save the Earth Created by Fernanda Macedo SAVE THE WATER! WATER Pay attention to how you use water. USE YOUR BIKE USE YOUR BIKE OR WALK! Leave your car at home. If you can stay off the road just two days a week, you'll reduce greenhouse gas emissions by an average of 1,590 pounds (721 kilograms) per year Recycle, reuse, reduce RECYCLE YOU can eliminate waste and protect your environment! You can opt for the selective collection and sending for recycling COMPOST Think about how much trash you make in a year. Reducing the amount of solid waste you produce in a year means taking up less space in landfills. Plus, compost makes a great natural fertilizer. Composting is easier than you think. 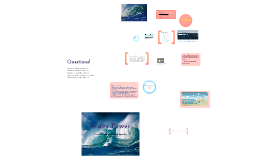 Transcript: Power take-off system: how the device transfers wave power to storable energy In surface-following attenuators, long, hinged floating tubes bob up and down in the water, parallel to the direction of the waves As the hinges flex, hydraulic fluid pumps generators What are two disadvantages of wave power? Sources: This is an example of an "oscillating wave surge converter" What are wave power stations classified by? Wave Power How it works: Pelamis - surface-following attenuator Wave energy is completely free! There is no fuel needed and no waste product. METHODS of energy capture include: What are two advantages to wave energy? Aquamarine Power's Oyster wave power http://www.darvill.clara.net/altenerg/wave.htm http://ocsenergy.anl.gov/guide/wave/index.cfm http://www.alternative-energy-news.info/technology/hydro/wave-power/ http://science.howstuffworks.com/environmental/earth/oceanography/wave-energy2.htm By Anri Brod & Helen Wieffering Generators are dependent upon the waves and the wind, which may vary. Needs a suitable site where waves are consistent. Wave generators must be able to withstand rough seas and winds Current technology can only capture about 50% of the energy produced. Impact on marine life is another concern. Some designs are very noisy - noise pollution could have a negative impact. Wave farms may interfere with commercial and recreational fishing Waves can produce A LOT of energy. ADVANTAGES Questions! Pelamis is an example of which type of energy capture? LOCATIONS for the devices include shoreline, nearshore, and offshore CETO - buoy EXAMPLES: Power stations are not expensive to operate or maintain. Overtopping devices have reservoirs which are filled with water by incoming waves to levels above the average surrounding ocean. This water is then released, and the energy of the falling water turns turbines. Point absorber/buoy Surface-floating attenuator Overtopping device Oscillating water column, etc. Disadvantages: In point absorbers and buoys, the buoys move relative to each other due to wave action, and this relative motion is used to drive electromechanical or hydraulic energy converters. In the case of CETO, underwater equipment on the sea bed has pistons, which are moved when waves pass across the top of the unit. This pumps seawater to drive generators on land. Name two things that affect wave power Wind transfers its energy onto waves as it blows over water Wave power is determined by height, wave speed, wavelength, and water density There are many, many, many different ways of collecting this power; because wave power is a largely unexplored method of alternative energy, there's no established "best" way to do it. Generally, these devices are classified based on three things: the method of energy capture, location, and their power take-off system 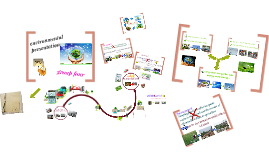 Transcript: environmental presentation for everyone loud and annoying sounds from factory machinery, aircraft, musical instruments ...... put the trash in the right place fossil fuel burning by motor vehicles, factories, aircraft ... this affects health, human life why using clean energy like: solar energy, wind energy,... propaganda reduce the use of plastic bags environment is polluting, and the pollution of groundwater, surface water.... design by Dóri Sirály for Prezi stress and psychological and health problems for humans human activity the reason 1 the reason 2 plant trees keep the air clean the reason 3 lead to the negative utilization of land knows dumping pollutants like pesticides, oil and other chemicals in river acid rain, greenhouse effect, health problems.... dumping plastic or other inorganic waste in the ground and the overuse of chemical fertilizers in agriculture water unclean, destroy ecosystem of rivers, lake group four the reason 4