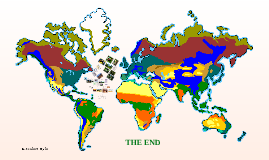 Transcript: ECOLOGY POWERPOINT By: The Jacob Haymans What is ecology? Comes from Greek word "oikos" meaning a place to live. Theophrastus was one of the first people to discuss the relationship between living things and their environments. Ecology is a complex science that draws on many areas of knowledge. (Organic, Inorganic, Chemistry, Meteorology, ect.) Why should you care? We have as much impact on our surroundings as they do on us. If we are not respectful of our environment we can mess it up which affects us in the long run. Savanna Tropical version of grasslands. Climate patterns of strong dry seasons for most of the year. Few trees spread out. Trees in the savanna: Shrubs, Baobab tree, Acacia tree Animals in the savanna: lions,elephants, zebras, giraffes Found in some parts of South America, India, and Australia, and in many parts of Africa. Desert A desert is defined simply by the amount of rainfall. Less than 10 inches a year. Trees and flowers: Palo Verde Trees, Tumble weed, Desert Willow, Alkal Maripson lily, Desert star-vine. Animals: Snakes and Scorpians, Camels, Hyenas Boreal or Taiga forest Taiga is the Russian word for forest Largest Biome Located at the top of the world in Eurasia and North America Temperature can be as low as -65 degrees in the winter and as high as 70 degrees in the summer Trees in the Boreal: Evergreen Spruce, fir, pine, deciduous larch Animals in Boreal: Wolverines, red squirrels, red deer, bobcat Chaparral A shrubby coastal area that has hot dry summers and mild, cool, rainy winters. Tall dense shrubs Total rainfall ranges from 15-40 inches per year. Chaparral cont. Located on the southern coast of California, some parts of the Mediterranean, The coast of Chile, The cape region of South Africa. Animals living in this region include Foxes, Coyotes, Lynx, Road Runners, Scorpians, and Rattlesnake. Tundra Comes from the Finnish word "tunturia". Average temperature of -70. The bare ground can some mosses and small plants but not trees. Only 48 species of land mammals. Animals consist of rodents, wolves foxes, deer, and of course the polar bear. Rainforest Forest of tall trees in a region of year long warmth. 1/4 of all medicine comes from this biome. Found in Central America, Africa, and Indo-Malaysia. Home to over 50% of the worlds animals. Deforestation is a big problem. In doing this project we learned more about the 8 biomes. I never knew what a chaparral was until now. We got to see how beautiful this planet really but if we don't be careful we can destroy it. Northern Africa Located on the western part of the U.S.A. Australia What we learned THE END 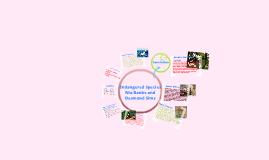 Transcript: There are many leading causes to endangerment but humans are the greatest. Most endangered species are very beautiful and rare and humans take advantage of that. Many of these animals are hunted for their fur, bones, tusk, etc. Recreational hunting, pollution, and etc. The effect of endangering these animals is extinction and the loss of these animals can greatly affect the environment. Endangered Species Nia Banks and Desmond Sims 1 Ivory-Billed Woodpeckert 2 Amur Leopard 3 Javan Rhinoceros 4 Greater Bamboo Lemur 5 Northern Right Whale Greater Bamboo Lemar The Amur leopard (Panthera pardus orientalis) is a very rare leopard subspecies that lives only in the remote and snowy northern forests of eastern Russian’s Primorye region. Its former range included Korea and northern China, but the Amur leopard is now extinct in those countries. A 2007 census counted only 14-20 adult Amur leopards and 5-6 cubs. Threats facing the species include habitat loss due to logging, road building and encroaching civilization, poaching (illegal hunting) and global climate change. Northern Right Whale The most critically endangered species on our list of the ten most critically endangered animals is the ivory-billed woodpecker, which lives—or lived—in the Southeastern part of the US as well as Cuba. This woodpecker was considered extinct until 2004, when a couple of shocking reports of sightings in Arkansas and Florida began to come in.The ivory-billed woodpecker owes its near- or complete extinction to habitat loss (logging) as well as over-exploitation by humans, who hunted it for its feathers. 6 Western Lowland Gorilla 7 Leatherback Sea Turtle 8 Siberian ( or Amur) Tiger 9 Chinese Giant Salamander 10 Kakapo Parrot The Island of Madagascar, off the southeastern coast of Africa, is home to dozens of species of lemurs—and almost all of them are disappearing very quickly due to habitat loss and illegal hunting. But the most critically endangered of all of Madagascar’s lemurs is the greater bamboo lemur (Prolemur simus), also known as the broad-nosed gentle lemur. Fewer than 100 greater bamboo lemurs remain in the island’s southeastern and south-central forests. The Javan rhinoceros (Rhinoceros sondaicus) is the most endangered of the world’s five rhinoceros species, with an estimated 40-60 animals remaining on the western tip of the Island of Java (Indonesia) in Ujung Kulon National Park. TThe water- and swamp-loving Javan rhinoceros formerly ranged throughout Southeast Asia and Indonesia, but has been hunted to near-extinction for its horn, which is used to make Asian folk medicines. Although it is now protected, it may not have a large-enough breeding population to prevent the species from going extinct. en·dan·gered/endnjrd/ Adjective: (of a species) Seriously at risk of extinction. The most endangered of all the world’s whale species, the northern right whale (Eubalena glacialis) numbers around 350 individuals that travel the Atlantic coasts of Canada and the US. The right whale is now protected, its small remnant population continues to suffer losses due to entanglements in commercial fishing gear: Whales drown after becoming wrapped in nets, lines and other equipment. Global climate change, which can affect the availability of the tiny crustaceans on which right whales feed, may prove to be another serious threat to their recovery. Javan Rhinoceros What does endangered mean? Conclusion Amur Leopard Ivory Billed Woodpecker Why are these animals becoming extincted? Top 10 Endangered Animals In the World So do what you can to prevent endangerment. There are many animals all around the world getting closer and closer to extinction each day mostly on account of humans. This isn't only sad but it's also causing grave damage to our ecosystems. 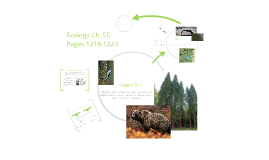 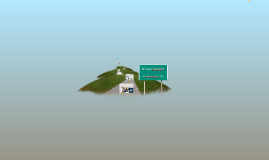 Transcript: In Biology, a Biotic Factor is any living component that affects the population of another organism, or the environment In Biology, a Abiotic Factor is a nonliving condition or thing, as climate or habitat, that influences or affects an ecosystem and the organisms in it In Biology, a Biosphere is the global ecological system integrating all living beings and their relationships, including their interaction with the elements of the Lithosphere, Geosphere, Hydrosphere and Atmosphere In Biology, a producer is an autotrophic organism capable of producing complex organic compounds from simple inorganic molecules through the process of photosynthesis In Biology, a Consumer is an organism that generally obtains food by feeding on other organisms or organic matter due to the lack of the ability to manufacture own food from inorganic sources In Biology, Energy is a convention used to refer to a specific social and technological endeavor In Biology, Ecology is the branch of biology that deals with relations of organisms to one another and to their physical surroundings In Biology, a Food Web is a graphical model depicting the many food chains linked together to show the feeding relationships of organisms in an ecosystem BY: Colten Endres 4/13/17 What are Biotic and Abiotic Factors What is Photosynthesis and Chemosynthesis What is Ecology In Biology, the Food Chain is a linear network of links in a food web starting from producer organisms and ending at apex predator species, Detritivores or Decomposer Species What is a Food Web In Biology, Photosynthesis is a process by which Plants, Algae and certain microorganisms transform light energy from the sun into the chemical energy for food In Biology, Chemosynthesis is the biological conversion of one or more carbon-containing molecules and nutrients into organic matter using the oxidation of inorganic compounds GOAL! In Biology, a Trophic Level is the position it occupies in a food chain Differences between Producers, Consumers, and Energy Ecology Powerpoint What is a Biosphere What is the Food Chain What is a Trophic Level What are Producers, Consumers and Energy Producers provide us with food and water Consumers consume the food and water Energy is used to help producers and consumers with what they do 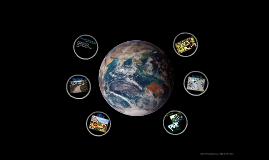 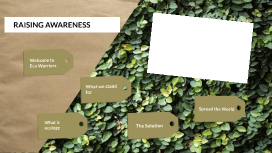 Transcript: RAISING AWARENESS Mrs. Wild has been a teacher for 24 years and is passionate about the environment Welcome to Eco Warriors Introducing The Queen Bee of the Ecology Club, Ms. Wild!!! Overview of the Issue OVERVIEW OF THE ISSUE What is ecology THE CAUSE Why is this happening? What we stand for THE EFFECT How is this happening? The Solution SOLUTION Let's Fix It LET'S FIX IT! Spread the World SPREAD THE WORLD How you can help! HOW YOU CAN HELP 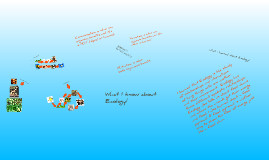 Transcript: What I know about Ecology! Energy Pyramid Food Chains Second Food Chain Food Webs Symbotic Relationship Commensalism is when one organism benefits and the is NOT helped or harmed. Mutualism is when both organisms benefit. Parasitism is when one organism benefits and the other is harmed What I learned about Ecology! I learned that Ecology is the study of relationships and interactions of living things with one another and their environment. Ecology has three different symbotic relationships. Ecology also tells us about food chains and where the animals get their energy and food. I also learned about a food pyrimad. A food pyrimad is another way to show the flow of energy just like a food chain. First Food Chain Rabbit Snake Fox Hawk Bear Sunflower Grass Mouse