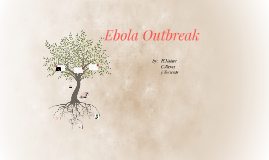 Transcript: The incubation period can be from 1-2 weeks, and the disease itself can last upwards of maybe a week or so. Symptoms of Ebola Ebola is a virus which is an extremely contagious filovirus causing an acute, usually fatal hemorrhagic fever and spread through contact with bodily fluids of infected persons and by airborne particles. Video Clip Ebola Q3: Is it possible to be reincarnated after dying from Ebola? (Zombies) by: H.Kaiser C.Reyes j.Torrente the EBOLA nurse Q1: what is ebola's virus path through the human body Is it true ? Ebola Outbreak Q2: How long does it take for EBOLA to kill ? 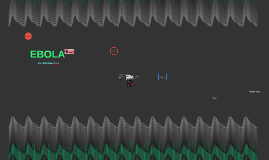 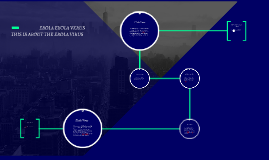 Transcript: Ebola, is a rare and deadly disease caused by infection with one of the Ebola virus species. Ebola can cause disease in humans and nonhuman primates (monkeys, gorillas, and chimpanzees). Animals and plants ans humans are the main RECOURCES OF THE SUPPLIER OF THE EBOLA VIRUS. The natural reservoir host of Ebola virus remains unknown. Scientist Believe It might take years to find out where the reservoir of Ebola virus is THE END OF EBOLA VIRUS THIS IS ABOUT THE EBOLA VIRUS The Ebola virus Has no vaccine. But putting the person into a Very very clean room and wearing Very good protection thats where the doctors try and help the patient. That saves the world from it By putting the person into the room. Ebola Virus Ebola Virus Ebola viruses are found in several African countries. Ebola was first discovered in 1976 near the Ebola River in what is now the Democratic Republic of the Congo. Since then, outbreaks have appeared sporadically in Africa. West africa started with the virus and is now North africa has it and they dont know how to handle it. Ebola Virus Affects The ebola virus was discovered first in the 1970. People get Ebola through direct contact Witch could be by kissing or (through broken skin or mucous membranes in, for example, the eyes, nose, or mouth) with blood or body fluids. by kissing or doing adultry. NO ONE KNOWS when the virus will end and no one knows when it will Stop and dissapear EBOLA VIRUS EBOLA EBOLA VKRUS Ebola Virus Ebola Virus 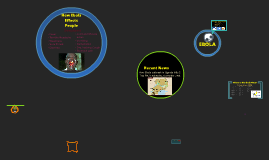 Transcript: By Jacob Christner and Ian Taylor Nobody for sure knows exactly how an Ebola virus outbreak starts. Cure and Cost Description of Ebola Ebola most likely started when a human made contact with an animal that had the Ebola virus. One of the most common ways a person can get Ebola is just like the everyday cold; being around one another. It spreads easily through a sick one's family and close friends. Also it can enter the body through cuts and blood like many common sicknesses. Another way it can get in to a human is through objects that have been contaminated with the virus. EBOLA How Ebola Effects People Sudan 1976 284 cases Sudan 1979 34 cases DR Congo 1976 318 cases DR Congo 1977 1 case DR Congo 1995 315 cases Ebola starts when someone gets infected with the Ebola virus. Where Is The Ebola Virus? Organizations Trying to Eradicate Ebola Symptoms This is a view of the virus No cure found yet Scientists are trying very hard to find a cure What is not shown is how much they are spending to find a cure Scientists have become one step closer lately That step is fruit bats are the most likely the animal host Cote d'Ivoire 1994 1 case Gabon 1994 51 cases Gabon 1996 31 cases Gabon 1996 60 cases Gabon 2001 61 cases South Africa 1996 1 case Uganda 2000 425 cases Congo 2001 58 cases There are many bad symptoms that are caused by Ebola. There is no known place where Ebola started but there is probably an animal-host that first had it in Africa. Then a human came in contact with an animal that had the virus and then they passed it along to other humans. Recent News New Ebola outbreak in Uganda kills 2 7:00 PM, Wednesday, November 14th. Cases since 1976 There are four known subtypes of the Ebola virus; three of which cause infection of Ebola in humans. They are Ebola-Zaire, Ebola-Sudan, and Ebola-Ivory Coast. Joint and Muscle aches Vomiting Dehydration Dry, hacking Cough Stomach pain Fever Terrible Headache Weakness Sore Throat Diarrhea How Ebola is Spread WHO (World Health Organization) along with the DR Congo UN (United Nations) in partner with the DR Congo CDC (Center of Disease Control 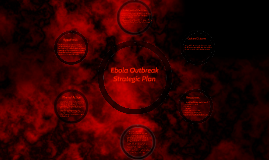 Transcript: Hypothesis Background Information/Evidence for your Plan of Action We think the environment and host should be broken. Since researchers know the origin of Ebola they can either quarantine the area and close the caves where the host lives or exiterminate the hosts or use them for research. Goal and Outcome Statement of the Issue The goal of our strategic plans are to get civilians educated about the virus so that there's are less Ebola infections caused. Resources Ebola Outbreak Strategic Plan Ebola is getting better globally considering the decreasing percent of deaths from Ebola as of 2015 Plan of Action Although parts of Africa still struggle with the outbreak and have false information about the virus Red Cross workers educated people in the town about the dangers of the Ebola virus. Since, Red Cross workers informed people about the virus resulting into less cases of Ebola in the Guinea. U.S clinics have prepared for the Ebola outbreak and have taken many precautions to preventing the spread of Ebola. Even though there is no known cure or treatments for Ebola Doctors work hard to treats the symptoms the at make fatal such as hemorrhaging, fevers, and lose ofw Step 1: Educate - Inform people about the virus, and have an Ebola hotline to call if anyone has questions or believe they have the virus. Step 2: Clean - Make sure public places are clean. For example: bathrooms, restaurants, bus stations, planes etc Step 3: Separate the infected from the uninfected - Anyone Ebola positive should be quarantine. Step 4: Find a cure - If we find a vaccine, Ebola can be controlled Trained health care professionals and volunteer staff Disinfect Scientist Ebola protection suits More Ebola clinic rooms Estimate of 50,000,000 dollars 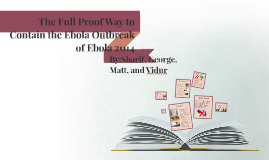 Transcript: More on Healthcare By:Sharif, George, Matt, and Vidur Major vaccine trials have started in Liberia. Liberians who receive the vaccine have given it positive reviews. The Ebola crisis at hand is an epidemic. Only a vaccine can stop people from contracting Ebola in the first place. The risk of people contracting mild cases of Ebola may be well worth stopping a worldwide epidemic. Ebola Awareness Thesis Statement Over two billion people are living on less than $2 a day More than 2.6 billion people lack access to: toilets sanitation facilities 30,000 children under five-years of age die every day from dehydration, malnourishment, and preventable diseases. Conclusion Improving Healthcare It spreads because of how people care for one another while one is sick . The infected blood and other body fluids of a person with Ebola can transmit the disease to others Organizations like the Red Cross can conduct classes about: The origins of Ebola What foods or bacteria lead to it The sanitation needed to keep people Ebola free. Doctors and nurses in 3rd world countries can attend classes about Ebola prevention. United Nations should restrict travel to, from, and inside Ebola-ridden countries Almost 5,000 people have died from the disease. Quarantining can also prevent people from traveling domestically and spreading the disease. Travel bans from places that are greatly affected with Ebola must be put in place. Travel Restrictions Cures for Ebola are in trial. Aware populations= the number of people with Ebola decreasing . Agencies like the United Nations must restrict travel in Ebola ridden countries. People living in unsanitary places= why Ebola has spread The healthcare system in third world countries can't handle human needs. If countries and world powers team up to fight Ebola, Ebola will be contained. People are prone to sickness because of: Unsanitary environments Little access to clean water Lack of a stable health care system If people have instant access to medicine: They'd be less likely to die or become very sick from mild illnesses. Vaccines In order to better combat the Ebola virus: A vaccine must be developed, awareness about Ebola prevention should be spread, travel restrictions should be implemented, and healthcare systems in third world countries should be supported and improved. The Full Proof Way to Contain the Ebola Outbreak of Ebola 2014