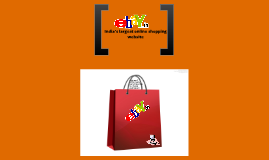 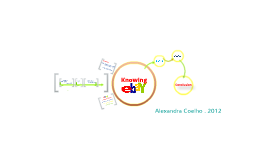 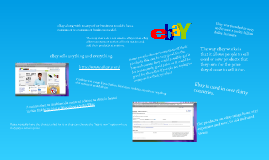 Transcript: http://www.ebay.com/ eBay sells anything and everything. The way eBay works is that it allows people to sell used or new products that they own for the price they choose to sell it for. Some people choose to auction off their products this can be very good for the buyers because they could possibly get it for a extremely good price or it could be good for the seller if people are trying to compete for their product Buyers usually have the choice to bid for it or they can choose the "buy it now" option where they pay a certain price. The products on eBay range from very expensive and new, to old and used items Products can range from clothes, furniture, makeup, comics or anything else someone could desire Ebay was founded in 1995 and is now a multi-billion dollar business. eBay along with many other business models has a consumer to consumer business model. The way that web 2.0 is used in eBay is that eBay allows consumers to view all information and add their products at anytime. Ebay is used in over thirty countries. A connection to multimedia content related to ebay is found in this link http://en.wikipedia.org/wiki/EBay 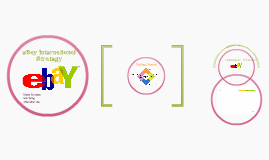 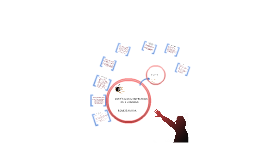 Transcript: In 1996 eBay hired its first employee and in November 1996, eBay entered into its first third-party licensing deal, with a company called Electronic Travel Auction to use Smart Market Technology to sell plane tickets and other travel products. 1998 the company has 30 employees, half a million users and revenues of $4.7m in the United States. In 2002, the company purchased IBazar, a similar European auction web site founded in 1995 and then bought PayPal on October 14, 2002. 2008 – In early 2008, the company had expanded worldwide had hundreds of millions of registered users, more than 15,000 employees and revenues of almost $7.7billion. In late 2009, eBay sold Skype for $2.75billion, but retained a 30pc stake EBay was build up by French born Iranian American computer programmer Pierre Omidiyar in 1995. EBAY'S IMPACT The boom of online business in the early 2000’s. boom in the use of credit cards and online payment systems. Businesses could maintain virtual presences on the world wide web, minimizing overheads and thus maximizing profits eBay is similar to Facebook provided a platform to buyers and sellers for exchange of goods and services. This is an online auction website designed to facilitate people to do online business. In1997 the site hosted 2,000,000 auctions and the company officially changed its name from Auction web to eBay . EBAY'S ICONIC IMPRESSION ROMEISA KHAN ON E-COMERCE Cutting out the middle-man Cheap and easy to list and buy Secure Hard to find goods and services Chance to convert surplus stuff into cash Opportunity to set up ‘storefronts’ Many businesses launched this way and became success stories Tiffany Tanaka Annual Sale :$2.5 million Product: Consignment sale with a variety of products Chris and Lisa Annual Sale : 8 million Product : electronic equipment 2010 – July 2010, eBay was sued for $3.8billion by XPRT Ventures for stealing information shared in confidence by the inventors on XPRT's own patents. In December this year eBay outlines plans to buy a German online shopping club called brand4friends for €150m. The deal is subject to competition inquiries in 2011. EBAY'S JOURNEY FROM 1995 TO 2012 eBay has built an online person-to-person trading community on the Internet, using the World Wide Web THANK YOU SUCCESS Dan Glasure Annual Sale :$2.5 Product: Model trains and train accessories INTRODUCTION THE CONCEPT OF E-COMMERCE 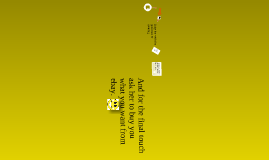 Transcript: How to get your mom to buy you something from Ebay! First finish your homework every day and try to do a little extra studying. Second do more chores around the house and help out your mom Third give your mom some compliments. Next buy your mom some chocolate. Give her a fresh morning with breakfast in bed Help her with the groceries or cooking or Tell her how the thing you want to buy helps you like all the positives and hiding the negatives Throw her a suprise party or give her a special treat. And for the final touch ask her to buy you what you want from ebay. Make your mom breakfast in bed.