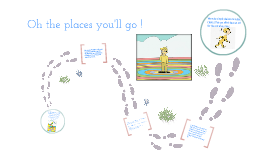 Transcript: We make simple choices everyday. Choices that can affect how we act for the rest of our lives. "You have brains in your head, You have feet in your shoes, You can steer yourself, Any direction you choose." - Dr. Seuss We were asked to choose 1 of 6 quotes to which we connected to the most. We chose the Dr. Seuss quote because it jumped out to us and we could all relate to it very easily. Every Monday, we run down the road, and we all have the choice to practice and make ourselves better each time or we can choose to waste our time playing video games or watching TV. Some of our connections were personal and others were not. we all thought that this quotes meant: - You control what you do and nobody can make the decision for you - Everything you do in your life is your choice - We pave our own paths in life Oh the places you'll go ! 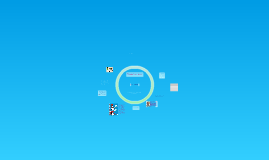 Transcript: Hi There, This is my presentation on Dr. Seuss. If you move your mouse over to the bottom right hand corner of the screen a pair of arrows should pop up. Click those, ( <- Back/last) ( -> forward/Next) to navigate the presentation.I hope you enjoy and learn something at least. Dr. Seuss Gorwing up Theordor Seuss Geisel Born March 3, 1904 in Springfeild MA Went to Dartmouth College Went Oxford for an English degree (Didn't recieve enlgish degree) Theodor died on a bed of accomplishments. He successfully wrote and published many books; The Grinch, The Cat in the Hat, Horton hears a Who, The Sneetches, The Lorax included in his library of fun and interesting stories. He died of Throat cancer in July 1991. BUt left us much to think and read about. By Chloe Brand Theordor's author name, Dr. Seuss really became fmous when he responded to His friend, William Spaulding, askeing him to write a story using a list of 330 words that every first grade should know. The Cat in the Hat came out about 9 months after Theodor was asked to write a book for children. it used 226 of the words from the list and 13 extras. Many people have said that Dr. Seuss changed children's literature, and I agree. He was a great man,with fantastic ideas. I'm really glad he was prompted to write and that he wrote. He has provided a lot of entertainmanet for me, my friends and family. He taught me how to read through his writing and has provided imagination filled books for the classroom too. A Creative Man, with a famous hand at writing down his imagination. Theordor wrote many comics and stories for school news papers, magezines and local papers. World War 2 came and he had to set aside his talents. Instead he drew comics for advertisments for the war effort. And became known for his drawings of silly charactors. Theodor Seuss Geisel Accomplishment Theodor wrote his first story/book, "To Think I saw It on Mulberry Street" to the rhythum of an engine, as a nonesence poem because he was bored. From then on he would write little poems to amuse himself and they became books. 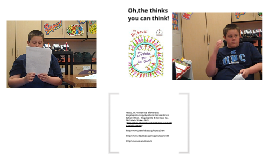 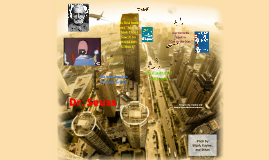 Transcript: Dr. Seuss His real name is Theodor Geisel. He illustrated 44 books. Our favorite book is "Cat in the Hat." Template by Missing Link Images from Shutterstock.com Prezi by Elijah, Kaylee, and Ethan His first book was "And to Think That I Saw It on MULBERRY STREET." 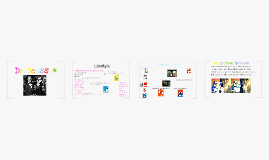 Transcript: Full name: Theordor Seus Geisel B. Born: March 2, 1904 Died: September 24, 1991 McElligot's Pool was published in 1947. 1941: Seuss begins his career as a political cartoonisht, ultimately publishing over 400 cartoons in the New York newspaper PM. The Grinch That Stole Christmas came out in 2000. Thidwick the Big-Hearted Moose was published in 1948. 1937: "And to think that I saw it on Mulberry Street", Dr. Seuss's first publishes children's book. Beatrix Potter calls it "the cleverest book I have met with for many years." Famous work! Seuss is a Bavarian name and was his mothers maiden name. I chose Dr.Seuss because he is a great author, his movies are amazing and I love them all. Especially "The Grinch That Stole Christmas" I have watched that movie since it came out and I was little, I own it, and still watch it now. He's funny and creative. Lifestyle. Green Eggs And Ham was published in 1960. In 1927 Dr. Seuss Married Helen Palmer and moved to New York City Family pronounce his name: Zoice not Soose. Dr. Seuss. * In On Beyond Zebra was published in 1955. 1931: Helen learns that she cannot have children. Ted writes his first children's book, an ABC of fanciful creatures. It does not find a publisher. The Cat In The Hat came out in 2003. Horton Hears A Who the movie came out in 2008. 1926: Geisel attends Oxford where he does not learn an M.A. in English, but does meet Helen Palmer. Geisel creates his first "Quick Henry the flit!" advertisement in 1928. Why I chose Dr.Seuss: When he was a magazine cartoonist he signed his name as Dr. Theophrastus Seuss in 1927. He changed this in 1928 to Dr. Seuss. Horton Hears A Who was published in 1954. In 1949 he sequel to The 500 Hats Of Bartholomew Cubbins, Bartholomew and the Oobleck is published. If I ran the Zoo was published in 1950. 1925: In Dartmouth's Jack-O-Lantern (Humor Magazine), Geisel publishes the first cartoon for which he uses "Seuss" as his pseudonym. If I ran the Zoo was published in 1950. 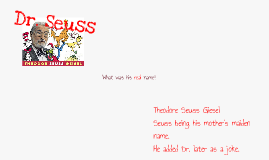 Transcript: What was his real name? Theodore Seuss Giesel Seuss being his mother's maiden name. He added Dr. later as a joke. Dr. Seuss 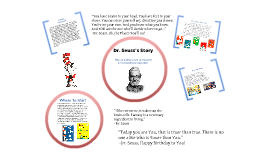 Transcript: “You have brains in your head. You have feet in your shoes. You can steer yourself any direction you choose. You're on your own. And you know what you know. And YOU are the one who'll decide where to go...” -Dr. Seuss, Oh, the Places You'll Go! “I like nonsense, it wakes up the brain cells. Fantasy is a necessary ingredient in living.” -― Dr. Seuss “Today you are You, that is truer than true. There is no one alive who is Youer than You.” -Dr. Seuss, Happy Birthday to You! After writing in many magazines, like Life, Vanity Fair, Judge and other magazines, as well as being rejected over 20 times, Vanguard Press publishes Dr. Seuss's first book, called 'And To Think That I Saw It On Mulberry Street'. Theodor then went on to write some of the most recognizable books in America and other parts of the world, like The Cat in the hat, Green Eggs and Ham, Oh, the Places You'll Go, Fox in Socks, and How the Grinch Stole Christmas, as well as many others. Where you come from almost always determines where you are going. And in this case, where Theodor Seuss Geisel came from inspired millions of people around the world. The talented and creative children's book author was born March 2, 1904 in Springfield, Massachusetts. Throughout his childhood, his mother, Henrietta Seuss, would read Ted (he was known as Ted to his family and friends) rhymes before he went to bed, before school, and pretty much anywhere in-between. Having the art of rhythm and rhyme around at a young age sculpted Ted's future, and quite possibly a lot of our child hood's. Theodor always liked to draw. In 1925, Seuss contributed to Dartmouth's (where he attended college) "Jack-O-Lantern" humor magazine, where he signed his drawing as "Seuss". Later in 1926, Seuss attended Oxford where he met what would later become his first wife, Helen Palmer. After seeing his art, she urged him to drop out of Oxford and become an artist. So, he did just that. The next year, Helen and Ted moved to New York to start a new career as a artist. Struggles and Success Where To Start Dr. Seuss's Story If you've ever read a book by Dr. Seuss, you know that he isn't a typical, classic author. Seuss wrote children's books with unusual words and weird phrases. Not many people were used to this strange way of writing at the time, but people liked it. It was something new and different, and that's what people liked about Dr. Seuss. Full of imaginary lands and creatures, with talking elephants and the Who's of Whoo Vill, Dr. Seuss impacted alot of our lives. I still remember reading those stories as a kid, and I would always giggle at the crazy-ness of his stories. Dr. Seuss is one of the best known authors in the world, and it is shown through his story that you can achieve anything by doing what you love. As an Illustrator How an ordinary man can become an extraordinary inspiration. A Wacky Imagination 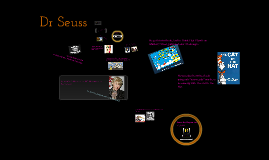 Transcript: Dr Seuss Born: March 2, 1904 Theodore Seuss Giesel was born in Springfield, MA His mother chanted rhymes to help him sleep. When he got older, he went to Dartmouth college. Theodore became the editor-in-chief of the humor magazine: But he was fired for throwing a drinking party Yet he still signed his name "Seuss" secretly. Seuss went to Oxford University in England to become a college professor. He met his future wife, Helen, there. Seuss returned to the U.S. and made cartoon advertisements, most famously for Standard Oil. After that, he signed with the Army to make training movies. He then illustrated a children's sayings book called Boners. He got his first book, And to Think That I Saw It on Mulberry Street, published after 27 attempts. He was asked to write a book using only "new-reader" words, so he came up with The Cat In The Hat. Dr. Seuss' wife Helen died in 1967. He remarried to Audrey Stone. She is now the president of Dr. Seuss Enterprises. Dr. Seuss wrote 44 more children's books in his lifetime. Seuss died September 24, 1991. a