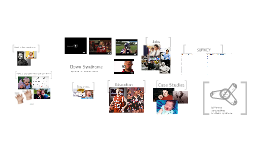 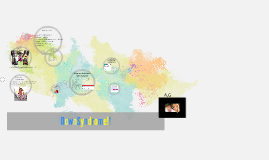 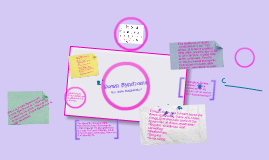 Transcript: Symptoms: *An upward slant to the eye *A short neck *Abnormally shaped ears *White spots on the iris of the eye *Poor muscle tone *Looseness in joints *Broad feet with short toes *Learning disabilities (cc) photo by Franco Folini on Flickr Double click to crop it if necessary (cc) photo by Metro Centric on Flickr doodles Inheritance: Down syndrome is inherited by parents. What is Down Syndrome? Down Syndrome is a disease casued by an extra trisomy 21 chromosome. Down Syndrome is only inherited. Down Syndrome notes San Francisco Budapest Biological Cause: Caused by the presence of all or part of an extra 21st chromosome. photo frame By: Anita Inegbenebor The Specific change in DNA that causes Down Syndrome is a third trisomy 21. Normally there are only 2 of each trisomy, but in cases of down syndrome, there are 3 of trisomy 21. outlook Notes Place your own picture behind this frame! (cc) photo by Metro Centric on Flickr details Though t Stockholm map Important Details (cc) photo by jimmyharris on Flickr Though there are no real cures for down syndrome, there are some things that can help control the symptoms of down syndrome: *Regular check-ups and screening *Medications *Surgery *Counseling The incidence of down syndrome is 1 per 733 births. It is more common with older parents above 50 to give birth to a child with down syndrome. That is to the increased mutagenic exposures on some older parents' reproductive cells. 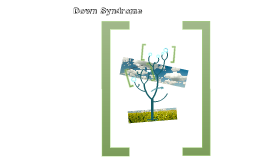 Transcript: (TRISOMY 21) A Genetic Disorder Amanda Heiser & Mike Fair Specific Gene Mutation Females/Males affected can not usually have children because it will end in a miscarrage. (35%-50% survival Rate) Most cases of Down's syndrome are sporadic but there is a small risk of recurrence in further pregnancies. The incidence of Down's syndrome is related to maternal age. The older the mother the higher the risk of an affected child, though the majority of children with Down's syndrome are born to younger mothers. Down syndrome is in most cases a genetic accident. It isn't passed on to children by someone who doesn't already have it (recessive) Non-Disjunction A Genetic Disorder End Result New chromosome has all initial genes plus a duplicated one (usually harmless) 2. gametes with one extra cromosome Down Syndrome The above factors can contribute to a shorter life expectancy for people with Down syndrome. Average lifespan of 49 years, with considerable variations between different ethnic and socio-economic groupsHowever, in recent decades, the life expectancy among persons with Down syndrome has increased significantly up from 25 years in 1980. The causes of death have also changed, with chronic neurodegenerative diseases becoming more common as the population ages. Most people with Down syndrome who live into their 40s and 50s begin to suffer from an Alzheimer's disease-like dementia. Differs between individuals, but: Growth parameters such as height, weight, and head circumference are always smaller than normal . Adults with DS tend to have short stature and bowed legs—the average height for men is 5 feet 1 inch (154 cm) and for women is 4 feet 9 inches (144 cm). Individuals with DS are also at increased risk for obesity as they age Characteristics Percentage mental retardation 100% small teeth 60% stunted growth 100% flattened nose 60% atypical fingerprints 90% short neck 50% shortened hands 50% congenital heart disease 45% shortened extremities 70% low-set and rounded ear 60% 21st vegetative or somatic chromosome Spindle fibres fail to seperate durring meiosis Physiology Result Inheritance Patterns Human Prognosis Gene Location Most cases are sporadic but there is a small Risk of recurrence in further pregnancies. Maternal age-older the mother the higher the risk However, very few cases (3-4%) mother or father may have a balanced translocation of chromosome 21. In these cases condition is inheritable. Genetic counselling should be sought in all cases. ante-natal screening test or prenatal diagnosis at 16 Weeks. other gametes lacking a chromosome 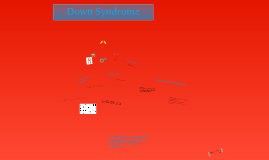 Transcript: Genetic disorder that causes lifelong mental retardation Symptoms Kids with Down Syndrome have distinct facial features. LIKE: Flattened facial features Protruding tongue Small head Upward slanting eyes, unusual for the child's ethnic group Unusually shaped ears Poor muscle tone Broad, short hands with a single crease in the palm Relatively short fingers Excessive flexibility Also One-Third of all children have hearth defects. Diagnosis and Tests Performed Down Syndrome can be diagnosed at birth, when the physical signs of down syndrome are noted and chromosome analysis can also be tested to confirm the diagnosis and to determine the recurrence risks. Diagnostic Tests performed: Aminocentesis- The removal and analasys of a simple of fetal cells from the amniotic fluid. Cannot be done until the 14th-18th week of pregnancy. Lower risk of miscarriage than chorionic villus sampling. Chorionic Villus Sampling- Extraction of a tiny amount of fetal tissue at 9 to 11 weeks of pregnancy. The tissue is tested for the presence of extra material from chromosome 21. Carries a 1-2 percent risk of miscarriage. Percutaneous Umbilical Blood Sampling- Most accurate method used to confirm the results of CVS or amniocetesis. The tissue is tested for the presence of extra material from chromosome 21. PUBS cannot be done untl the 18th-22nd week. Carries the greatest risk of miscarriage Treatments There is no cure for down Syndrome. However some clinical manifestations can be treated. For Example: Hearth Defects and Duodenal Artesia can often be corrected by surgical repair. Also community support groups exist to deal with the emotional effects and to help plan the affected individuals' future. Life Expectency The avarage Life Expectency of a person with Down Syndrome is 60 years. How common is this disorder, you wonder? Its estimated that one child in 660 has Down Syndrome. Chromosome disorder Human cells normally contain 23 pairs of chromosomes. One chromosome in each pair comes from your father, the other from your mother. The cause of Down syndrome is one of three types of abnormal cell division involving chromosome 21. All three abnormalities result in extra genetic material from chromosome 21, which is responsible for the characteristic features and developmental problems of Down syndrome. The three genetic variations that can cause Down syndrome include: Hi im an extra! Trisomy 21. More than 90 percent of cases of Down syndrome are caused by trisomy 21. A child with trisomy 21 has three copies of chromosome 21 — instead of the usual two copies — in all of his or her cells. This form of Down syndrome is caused by abnormal cell division during the development of the sperm cell or the egg cell. Life with Down Syndrome Newborns: babies with ds have reduced muscle and a protruding tounge, wich makes fedding babies take longer. Children with DS may be mentally and physicaly delayed. Also develpment of speech and language abilities may take longer than expected. Down Syndrome is named after John Langdon Down, the first physician to identify the syndrome. By: Adilene Garcia 5th Down Syndrome 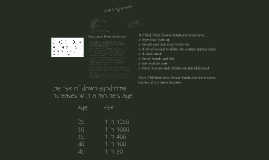 Transcript: down Syndrome What is Down SYndrome? Down syndrome is a chromosomal disorder that includes several birth defects. People Affected have some degree of mental disabilitys, characteristic facial features and, often, heart defects and other health problems. The intensity of these problems varies greatly among affected individuals. What causes Down Syndrome? Down syndrome is caused by extra genetic material from chromosome 21. Chromosomes are the structures in cells that contain the genes. sometimes something goes wrong before fertilization. The sperm or egg may develope incorrectly causing and sperm or egg to have an extra chromosome number. when the cell joins with a normal egg or sperm the embryo has 47 chromosomes instead of 46. about 95% of cases of down syndrome is causes by an error in cell division. sometimes a part of chromosome 21 breaks off and attaches its self to another chromosome in the egg or sperm cell. About 2% of poeple with down syndrome have a type called "Mosaicism" this is an error in cell division. Health Problems? Some health defects that can develope in an individual with down syndrome are the following >Heart Defects >Intestinal Defects >Vision Problems >Hearing Loss >Infections (colds, ear infections, ect.) >Thyroid Problems >Leukemia >Memory Loss These problems can vary from Extreamly deadly to not somthing to worry about. but all these matters are carefully supervised. A Child With Down Syndrome may have... > Eyes that slant up > Smaill ears that may fold over > A small mouth making the tounge appear large > A short neck > Small hands and feet > low muscle tone > Short Stature and childhood and adulthood Most Children with Down Syndrome have some, but not all of these features the risk of down syndrome Increases with a mothers age. 25 1 in 1250 30 1 in 1000 35 1 in 400 40 1 in 100 45 1 in 30 Risk Age 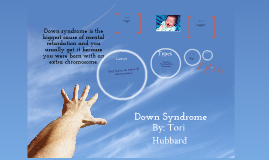 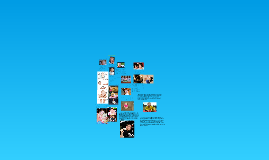