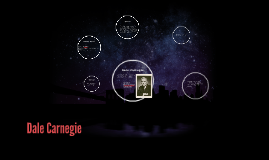 Transcript: He is known for developing famous courses of self-improvement,salesmanship, corporate training,etc. What he is known For? Quotes Famous books Dale Carnegie Dale Carnegie November 24, 1888 – November 1, 1955) "The essence of all art is to take pleasure in giving pleasure." "Develop success from failures. Discouragement and failure are two of the surest stepping stones to success." Art of public speaking Lincoln, the unkown. How to Win friends and Influence people(My favorite) How to stop worrying and start living "The ideas I stand for are not mine. I borrowed them from Socrates. I swiped them from Chesterfield. I stole them from Jesus. And I put them in a book. If you don't like their rules, whose would you use?" and many others writer Entrepeneur Lecturer 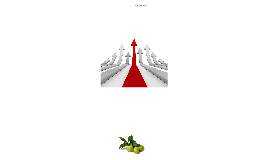 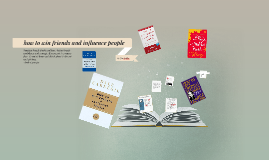 Transcript: By: Jan Brablec World renowned author. Born in 1888, Maryville, Missouri. Author of 11 self-help books and 9 booklets. Served in the US Army during World War 1. Best known for HTWFAIP. Died in 1955, Forest Hills, New York. What you can gain... how to win friends and influence people http://www.amazon.com/How-Win-Friends-Influence-People/dp/1439167346 Where to buy Be one of approximately 10 million readers of his book or 8 million graduates of his class. Excellent interpersonal skills Become better liked by people Manipulation skills far greater than out of most books. (Even "Power", and "The Art of Seduction".) Greater appreciation for human emotion Understanding what drives people Power Influence Author of world- famous book, class and philosophy. Bibliography Originally published in 1937. Considered best in self-help books. Reputation of good and evil. Translated into most languages. Notable readers include Warren Buffett, Johnny Cash, and Emeril Lagasse, Charles Manson. Chapter 7 is considered to be the most malicious. (Cooperation) One of the greatest lessons is how to be liked. "Don't criticize, condemn, or complain." (3 C's) Builds on examples from his life and from history, as well as research. how to win friends and influence people Writer, Lecturer. The End Bloomberg: http://goo.gl/DyYqh2 The Blaze: http://goo.gl/ePJsrf Forbes: http://goo.gl/0vhE06 NPR: http://goo.gl/2e23nj Wikipedia: http://goo.gl/Ad1f0S Inaction breeds doubt and fear. Action breeds confidence and courage. If you want to conquer fear, do not sit home and think about it. Go out and get busy. -Dale Carnegie Who is Dale Carnegie? 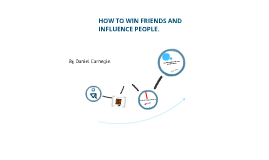 Transcript: HOW TO WIN FRIENDS AND INFLUENCE PEOPLE. Don¨t criticize them: they are just what we would be under similar circumstances. Abraham Lincoln. Magic words. NOT Creatures of logic. Creatures of emotion. By Daniel Carnegie. DEALING WITH PEOPLE. CALL the people by his name. Beautiful sound. WHAT? Sometimes applied selectively. CRITICISM. DEMORALIZE PEOPLE. Solving a problem? 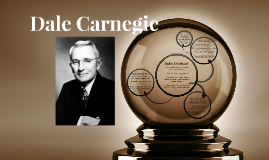 Transcript: - Early 20th Century, born to two poor Christian farmers. - Raised in Warrensburg, Missouri - Developed speech skills early on attending seminars and assemblies of famous speakers. -Offered spot in Warrensburg State Teacher's College. Couldn't pay board. Dale's Turning Point Dale's Childhood - Dale Carnegie Course is taught worldwide, same principles developed in his class of 1912. - From poor Missouri farm boy, to world-renouned author and teacher. -HTSWASL - “you won’t find anything new in it”, he says that the skills and thoughts within the book are things we as people develop and simply have not effectively applied. Dale Carnegie taught to apply ancient and basic truths to live the life we want to live, with the people we would like in it. Dale Carnegie Dale's Legacy - Miserable after Military discharge, selling trucks and living in NY apt. - Decided he'd "live to write, and write to live." -Got position to teach Communications at YMCA, challenging because practical nature. - Attended Warrensburg State Teacher's School, rode horse. - Outstanding ability to communicate and influence. -Graduated and joined play tour, joined military. Dale as Young Man Dale's Success -To teach course, Dale searched for texts on human relations, found none. Wrote own after 1.5 years research and updated as years passed with his new "human relations laboratory", teaching people to apply concepts they already knew. How to Win Friends and Influence People. - Work sold 15,000,000 copies since 1936, still going! One of first widely successful self-help works. - Made another laboratory and work called How to Stop Worrying and Start Living, designed to eliminate worry using information most people knew. 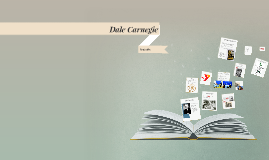 Transcript: Biography -known as an author -has a special gift with words -3 main points: his life before start of his career after he passed away His jobs His life before -died in November 1, 1955 at his home in Forrest Hills, New York. -hodgkin's disease, complicated with uremia Thankyou -first job: selling correspondence courses -had a dream to become a Chautauqua lecturer saved up money for years -his book became a huge hit with 5 million copies sold in 31 different languages -450,000 graduates at the Carnegie Institute -he critiqued over 150,000 speeches The start of public speaking Carnegie training -born in 1888, Maryville, Missouri -was a poor farmer's boy -a hardworking boy Dale Carnegie -he was still living at YMCA but still had ambition -1912 is his very first session and it was a great first session -1912 he was earning $500 every week ($12000 today) -published in 1936 -how to create success in business as well as personally -4 foundational parts to this book 1. build greater self confidence 2. strengthen people skills 3. enhance communication skills 4. develop leadership skills 5. improve attitude and reduce stress Carnegie Hall After he passed away -returned to New York -he changed his name to Carnegie from Carnagey -1916 his dream starts to come true he started to rent the carnegie hall Dale Carnegie His death His courses 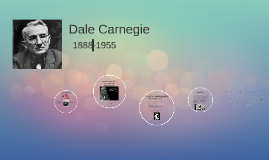 Transcript: Leadership Characteristics OVERCOME CONT. LIST OF BOOKS DALE PUBLISHED: Background LEAD BY EXAMPLE: Dale Carnegie Place of birth: Maryville, Indiana Birth year: 1888 Birth name: Dale Harbison Carnagey current name: Dale Harbison Carnegie Parents: James William Carnagey & Amanda Elizabeth Harbison YOUTH OVERCOME OVERCOME Dale had to get up at 3:00am every day to help his father with farm chores After his chores, Dale walked 3 miles to college every day Dale joined the College Literary Society but failed to be an effective novelist and/ or writer Dale had been to small to become a successful athlete in college. QUOTES Another characteristic that Dale Carnegie had would be his ability to listen to those he trained. It was stated that when Dale had ran out of material to train his class with, that he let his class speak in front of him rather than have himself speak in front of the class. This exercise enabled the group to help the individual to overcome their fears with public speaking. Dale left a successful sales role in south Omaha Nebraska to enroll in the American Academy of Dramatic arts in New York. Dale played the role of Dr. Harley in a roadshow Poly of the Circus, but failed to make acting a career. Dale attempted to overcome hardships from acting by selling cars in New York during the day, while writing a novel in the evening; Dale failed to be successful with both ventures. Dale grew up living on a poor farm; Dale’s father had a difficult time running a successful farm. YOUTH HARDSHIPS Work Cited Dale’s Mother had been a major influence in dale’s life; She had been a great leader within her community and had been a great public speaker. Dale Carnegie began to write program booklets for his class. Dale's class began to receive PR traction; poeple demanded that he spoke at seminars and his class continued to grow. Dale started to write his first of 7 novels in 1915 with the novel art of public speaking. Dale became active with the debate team and won an oratory contest. Dale had been able to gain popularity from the debate team to become V.P. of the student government. Dale became successful in sales and had been the top ranked sales associated in the nation for his firm. Leadership Characteristics 1888 -1955 Kemp, G., & Claflin, E. (1989). Dale Carnegie: The man who influenced millions. New York: St. Martin's Press. Watts, S. (2013). Self-help Messiah: Dale Carnegie and success in modern America. Other Press. Dale began to teach a public speaking class at a local YMCA center. Dale was able to receive 80% of the net profit from his teachings. The classes would be the foundation of his institute that is currently standing today; Dale Carnegie Training. EDUCATION FATHER OF THE SELF-HELP MOVEMENT CHARACTERISTICS OF LEADERSHIP Adult HARDSHIPS “Success is getting what you want happiness is wanting what you get.” “You know what the happiness you get out of life, will depend very largely upon your ability to win friends and influence people." Dale Carnegie had always been active with education. Whether it be attending college at State Teacher’s College or creating his own institute Dale Carnegie Training. “… from one man’s belief in the power of self-improvement to a performance-based training company with offices worldwide…” - Dale Carnegie Training One leadership that Dale had been known for would be his ability to lead by example. Dale’s son-in-law stated that when Dale was still alive, around 50+ years old, wealthy, and living in New York City, Dale would take the subway system/walk to the classes that he had taught. Supposedly along the way, Dale would remember all of the names of the police officers and always was happy to have seen everyone that encountered on a regular basis. This particular behavior was an example of genuinely being happy to see those who you encountered. 1915: Art of Public Speaking 1920: Public Speaking: the Standard Course of the United Y. M. C. A. Schools 1926: Public Speaking: a Practical Course for Business Men. 1932: Lincoln, the Unknown 1934: Little Known Facts About Well Known People 1936:How to Win Friends and Influence People 1937: Five Minute Biographies 1944: Dale Carnegie's Biographical round-up 1948:How to Stop Worrying and Start Living 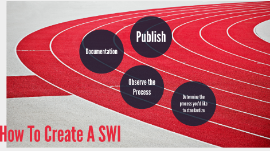