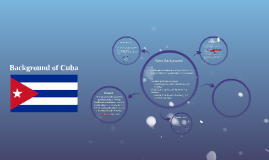 Transcript: Economy People attend a mass at a church on Good Friday in Havana April 6, 2012. Bells rang from Roman Catholic churches throughout Havana on Friday to remember the death of Jesus Christ as Cubans celebrated a holiday on Good Friday for the first time in more than half a century. Christopher Columbus, in his quest to find a westward route to India stumbled on the territories of America, a continent then unknown to the Europeans, and reached the shores of Cuba on October 27, 1492, where he is reported to have said “this is the most beautiful land human eyes have ever seen.” Columbus spent several weeks navigating along the Cuba’s north coast without realizing it was an island. Cuba is located in North America. It is an island which closest neighbors are Jamaica, Florida, Haiti, and Mexico's Yucatan Peninsula. The country is located at the entrance of the Gulf of Mexico and beneath the Tropic of Cancer. One Major City Geography Cuban's government is a totaliarian communist. It is state-headed by General Raul Castro and is a cadre of party loyalists. The state plans and controls the economy.Everything is distributed. Food Government in Cuba Perservative and inefficient. The government sector takes up much of the labor force. Economy is controlled by the government. Today, Cuba still remains far from being able to meet its citizens economic needs in accord with its principles of human development. Bibliography https://www.britannica.com/place/Havana http://www.cubahistory.org/en/spanish-settlement.html CUBA Cuba Brief background Fidel Alejandro Castro Ruz is a Cuban communist revolutionary and politician who was Prime Minister of Cuba from 1959 to 1976, and President from 1976 to 2008. He also served as the Commander in Chief of the country’s armed forces from 1959 to 2008, and as the First Secretary of the Communist Party of Cuba from 1961 until 2011 Moors and Christians (Black Beans and Rice) Fried Plantains. Note: Ripe plantains have peels that are almost completely black. ... Tuna in Sauce. Yucca (Cassava) Flan (Baked Custard) Helado de Mango (Tropical Mango Sherbet) Aceitunas Alinadas (Marinated Olives) Ensalada Cubana Tipica (Cuban Salad) Havana, which is the national capital, is the largest city in Havana and is a major port and commercial center for the country. http://www.nationsonline.org/oneworld/History/Cuba-history.htm Good Friday Holiday http://www.speakinglatino.com/interesting-facts-about-cuba-history/ Famous Person from Cuba 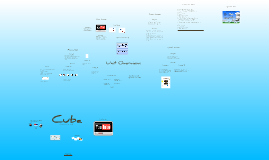 Transcript: Cuba Background Info: Republic of Cuba -Head of State- Raúl Castro -Type of Government- Communist -Language- Spanish -Capital- Havana Typical Meals: tostada and café con leche. chicken empanadas Snack main meal of the day. Usually includes Beans and Seafood National Anthem: “La Bayamesa”- By Pedro Felipe Figuered Unit Overview: This unit will cover the span of one week, with lessons on the first four days and a fiesta on Friday. Unit Schedule: Day 1~Monday Music Lesson- Session 1 Play and sing with rhythmic accuracy. Play independent instrumental parts while others sing and play rhythmic, melodic, or harmonic parts. Play music representing diverse styles, genres, and cultures. Process: Session 1: Introduce Cuban culture as it pertains to the arts in general. Brainstorm on the whiteboard - salsa Listen to "Ayer" and analyze instrumentation. Teach and clap basic rhythms. Clap the rhythms with "Ayer". Day 2~ Tuesday Music Lesson-Session 2 Science Lesson Spanish Lesson- Session 1 Session 2: Review and practice rhythms. Introduce Latin Percussion instruments. Break into groups and teach. Play as a drum ensemble. Science Lesson: Purpose: To learn about the water cycle: Evaporation, Condensation, Precipitation , and run-off. To learn about how geography influences climate, with a specific emphasis on Cuba. Process: The students have previously learned about Barometric Pressure, and have learned the lyrics to the song entitled "Cloud Cover" Discuss the differnt types of cloud cover. Then sing "Cloud Cover". Discuss the climate of different world regions and how the geographical features of these regions affect the weather. Discuss the climate patterns of Cuba. Have the students research Cuba's barometric pressure, and make predictions about the weather. Compare the students' predictions with the actual Cuban forecast. "Cloud Cover" Lyrics: This big old ball we call earth has a wondrous atmosphere; There's oxygen that we breathe in and water vapor here. Those tiny drops of H2O climb high till they take flight, And when they cool they start to pool into fluffs of grey and white. CHORUS: I call it Cloud Cover I keep one eye on the sky. I'm watching Cloud Cover, And perhaps you wonder why. Because when clouds begin to change They let the sun shine or bring rain So watch the Cloud Cover, Keep a-watching all those clouds. They're thin and high, those cirrus clouds mean weather's looking fair Made up of ice, they look so nice like stands of angel hair. And stratus layers may hang low as a drizzle droplet falls, Or show me puffs of cumulus like soft white cotton balls. (Chorus) The nimbostratus might bring rain as a warm front leaves its trail, And watch with dread as thunderheads bring you lightning storms and hail. (ouch!) Cloud Cover I keep one eye on the sky. I'm watching Cloud Cover, Now you know the reason why. Because when clouds begin to change They let the sun shine or bring rain So watch the Cloud Cover, Keep a-watching all those clouds. http://new.music.yahoo.com/nick-walker/albums/sing-along-with-the-weather-dude--157722651 Types of Clouds: Purpose: Learn Basic Spanish Weather Vocabulary. Analyze song lyrics about weather. Be able to ask about and describe the weather. Process: Session 1: Introduce basic weather terminology. In groups, have the class discuss the weather. Learn and practice singing ¿Qué tiempo hace? Analyze and translate the lyrics. Day 3~ Wednesday Music Lesson-Session 3 Spanish Lesson- Session 2 Dance Lesson Session 3: Listen to "Riendo el rio corre". Teach song. Spanish Lesson: Session 2: Translate the lyrics of "Riendo el río corre". Review how geography affects weather, focusing on Cuba. Assign metereology assesment and allow students classtime to work in groups. Dance Lesson: To learn about the origins and types of Salsa Dancing. To learn basic Salsa steps and practice dancing in pairs. Types of Salsa Dancing: Teach background information about Salsa Dancing. Divide class into 2 groups, teach the steps to each group individually. Practice dancing alone and in pairs. Salsa Steps: Day 4~ Thursday Music Lesson-Session 4 Music Lesson Session 4: Break up into three groups. Salsa, sing, and play. Rotate groups. Day 5~ Friday Fiesta!! http://www.cubacuban.com/kids/childreneat.shtml http://www.cubacuban.com/kids/anthem.shtml http://www.cubacuban.com/kids/basicfacts.shtml 5th Grade Integration Unit Sources: ASSESSMENT: Dinner Purpose: pastelitos Purpose: Duration of Unit: Process: Lunch Breakfast 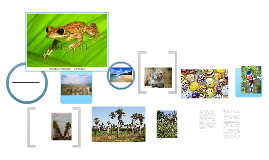 Transcript: Adriana woke up one Saturday morning. She was very excited, today was her birthday. She put on a short-sleeved T-shirt and some Caprise, then rushed off down to breakfast. When she got downstairs her mom surprised her. She had gotten an orange! As she sat down to her breakfast of an orange, she wondered what they were going to do today. Maybe walk to the park? Just then then her mom answered her question for her. "Adriana I have planned a special surprise for you. I have tickets for a bus to Guines!" "oh mother how did you do it? we get to see grandma and grandpa?" "yes dear. Hurry up the bus is going to leave in 10 minutes." Adriana rushed to finish her delicious and rare orange. As soon as her mother and her brother were done the rest out to the bus stop. The bus was already overfull but Adriana did not care. They were actually writing on the bus! This was a real treat. not to mention, she gets to see her grandparents! WHen shhe arrived at her grandparents she hug her grandparents then rushed off to the fields. She greatly enjoyed picking bugs up tobacco pants or shooting birds away from the corn. then it was time for lunch. She got a real treat of getting to eat ham sandwiches. Then her brother and herself went off to ride the cattle. Her last activity was feeding the chickens then she got to climb the tall trees. Finally it was time to go home. While riding on a strangers truck, she saw the tall buildings in the many, many, apartments. She also sees a horse drawn carriage, an old car, and a very large group of bikers and runners. She gets home to be greeted by her many other family members. Then, to her great surprise, she got a gift. She got a paint set! She put it quickly away to use at school in the morning. Then, she was whisked off to bed. Early the next morning, she woke up to get ready for school. She dressed in her usual red and white uniform. That day she learned about science math and Spanish. In art she got to use her new pink set. She practices painting and paints Che Guevara with her other friends. Next it was time for the long walk home. When she gets home she is a quick meal of black beans rice and plantains. After that she walks to her ballet practice. Then, very tired, she went home and fell asleep. http://www.ifitweremyhome.com/compare/US/CU