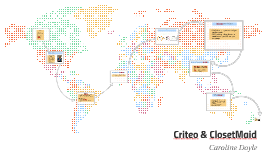 Transcript: How? Tied directly to your campaigns performance CPC pricing makes it easy to understand your ROI on your campaign We work to personalize ads to bring Beth back to ClosetMaid.com to buy that closet system, as well as other products we expose her to Criteo's CPC Model Why Criteo? Caroline Doyle Beth saw her closet system in an ad while browsing the weather later that day Beth bought the closet system from ClosetMaid.com after clicking the ad that appeared Beth is redoing her closet and went onto ClosetMaid.com She then left ClosetMaid to go to ContainerStore.com to look at other systems because price is important to her Agenda Introduction What would a partnership look like? Why will you benefit from Criteo? Questions Conclusion She is a practical purchaser She tends to be more of a needs based shopper Saving money and time is important to her Criteo & ClosetMaid How does CPC work for ClosetMaid? What happened to Beth? Why does this matter to ClosetMaid? What does this mean for ClosetMaid? Ads reach 1 billion users per month 710 billion ads served in 2015 Market leader in performance marketing What do we do? Dynamic Retargeting Converting Window shoppers into buyers Transparent CPC model delivers measurable ROI across devices Best in class service with a 90% retention rate Unparalleled Technology Cross Device Reach This is Beth Criteo personalizes each ad that is shown to Beth in real-time by using dynamic ads Criteo recommends other products that might match her preferences With a click she will be back on ClosetMaid buying all her closet needs Criteo ClosetMaid only pays Criteo if Beth clicks the ad shown to her Criteo only takes credit for Post Click Sales 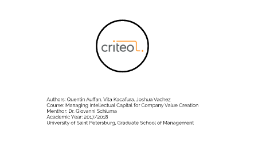 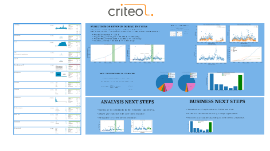 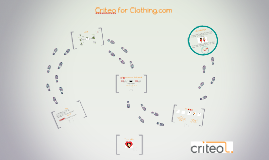 Transcript: What does this mean for Clothing.com? CPC -> Only if Claudia CLICKS on the ad Criteo claims: we helped you convert her into a buyer Conclusion Direct Relationships with +14,000 Premium Publishers What does this mean for Clothing.com? What does this mean for Clothing.com? Dynamic Creative ...but then she decided to have a look at other online shops as well and therefore left Clothing.com to visit Dress.com... Claudia finally bought her red dress and an additional one that she saw in one of the ads. - RETARGETING - Converting window-shoppers into buyers The dresses Claudia saw in the online shop Dress.com did not even cross her mind again... Why Criteo? Let's plan Clothing.com & Criteo's journey together & convert the rest of your unique visitors into happy Claudias! Criteo Engine Criteo sells on CPC basis -> Criteo personalises each ad that is shown to Claudia in real-time -> And additionally recommends her other products that might match her taste -> With one click she will be back at your online shop and ready to buy Claudia went to Clothing.com and saw an amazing red dress... Criteo buys on CPM basis What does this mean for Clothing.com? Cross-device Criteo's transparent CPC model Facebook Value purely measured on Post CLICK Sales -> We better know when, where, what & who to advertise to What This is CLAUDIA -> We bring Claudia back to your online shop to BUY your products + 10,000 Brands with 90% Retention Rate Criteo for Clothing.com - Founded 2005 in a cafe in Paris - Grown from 3 - 1800 employees - 27 offices worldwide - Market leader in Performance Marketing NEXT STEPS Who After Claudia left Clothing.com she saw appealing ads of her red dress & similar products that matched her taste when she: - logged into FB - read the news online using her: - smart phone - tablet - laptop -> Be where your customers are! FEEDBACK Universal Match HOW 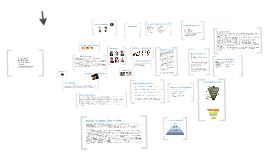 Transcript: John Wanamaker Half the money I spend on advertising is wasted; the trouble is I don't know which half. John Wanamaker, (attributed) US department store merchant (1838 - 1922) Mad as hell!! What are the current Re-targeting challenges? • One of the few re-targeting challenges is that it cannot “live alone” since it doesn’t have a scale. Additional display strategies (e.g. lookalike targeting, demo, behavior targeting) need to be implemented to increase funnel • Privacy still continues to be a self-regulatory issue where consumer education needs to be managed in a seamless way Why Retargeting? Key takeaways: • Re-targeting is expanding and continues to move higher in the media mix • New traffic driving technologies are necessary to run alongside re-targeting to allow to scale • Clear creative re-targeting strategy needs to be in place to ensure successful result • Re-targeting has been around for some time. Over the last year it went through major evolution not only because it proved to be an effective ad tactic that delivers results, but also because the historical reach challenge has been eliminated. DSPs reach is now tremendous as DSPs can be plugged in many ad exchanges which results in reaching closer to 100% internet audience • All panel participants agreed on placing re-targeting right behind SEM in the decision making funnel as it complements SEM and should be considered as a lower funnel tactic reaching customers who have already shown an interest in the given brand. The average conversion rate has been 6-10x greater than traditional display traffic. • Forms of re-targeting have also evolved and now also include TV, Search or Social and Co-op re-targeting which gives marketers additional targeted tactics to choose from. Sociomantic 1.0: Site Level 2.0: Category Level 3.0: Product Level Real time targeting of dynamic creative Specific products used in ads Recommended products 2001 Pop-up (and pop-under) ads fill users' screens. They peak in 2003, at 8.7% of all online ads. Although initially effective, earning 13 times more clicks than banners, pop-up blockers end the annoyance almost as quickly as it began. 2005 Video ads bring in $121 million -- just over 1% of online ad revenue. Today, they're still a small slice of the overall market as YouTube, Hulu, and others experiment with formulas, but video-ad revenue jumped to $500 million in 2008. 2007 Facebook debuts its advertising system, including Beacon, which raised members' hackles for being an opt-in program by default. A month later, CEO Mark Zuckerberg allows users to turn off Beacon -- and they do just that. 2009 Companies such as Lotame begin to experiment with engagement as the new ad unit on social networks. The goal? Attract more than the $2.35 billion that companies are expected to spend on social-network advertising this year. Since 2009 till 2010 Online ads were the new frontier of the advertising industry about 10 years ago. Over the last decade, the industry evolved and expanded creatively, introducing new types of Web advertisements, and companies devoted more money in business plans to online exposure. While Web ads were the first real source of revenue on the Web, a look at their development and value exchange, significance to Web sites, impact on the industry, interactive value and performance will demonstrate that advertising on the Web continues to change and grow in a fight to hold the top spot for the future. Re-targeting tips Making a Material Impact 1994 Pay-per-click keyword advertising debuts at GoTo.com (later Overture, and now a part of Yahoo). It is widely mocked. 1998 HotWired is the first site to sell banner ads in large quantities to corporate advertisers. The first buyers? AT&T and Zima. Click-through rates, the gauge of success, are an astonishing 30%. 2000 Google rolls out AdWords, a pay-per-click service. AdWords made performance-based ads mainstream and now accounts for more than 95% of Google's revenue ($21 billion in 2008) Display ... it really works!! Evolution ... Retargeting The first clickable web ad (which later came to be known by the term "banner ad") was sold by Global Network Navigator (GNN) in 1993 to Heller, Ehrman, White and McAuliffe, a now defunct law firm with a Silicon Valley office.[citation needed] GNN was the first commercially supported web publication and one of the very first web sites ever.[citation needed] HotWired was the first web site to sell banner ads in large quantities to a wide range of major corporate advertisers. Andrew Anker was HotWired's first CEO. Rick Boyce, a former media buyer with San Francisco advertising agency Hal Riney & Partners, spearheaded the sales effort for the company.[1] HotWired coined the term "banner ad" and was the first company to provide click through rate reports to its customers. The first web banner sold by HotWired was paid for by AT&T, and was put online on October 27, 1994.[2] Another source also credits Hotwired and October 1994, but has Coors' 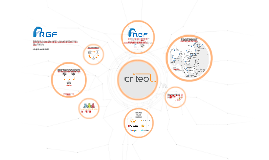