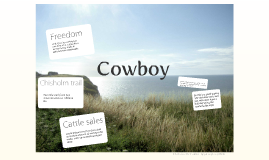 Transcript: Photo credits: 'horizon' by pierreyves @ flickr only 15 to 20 cowboys at one time on a cattle drive so the money made is split between less people cattle prices went from $4 to $40 so there is a bunch of money to be made, with up to 2000 cattle per drive Freedom Cowboy 750 mile trail from San Antonio texas to Abilene KS So this is a good paying job with less work and you will never have a dull day living the ranching life style 30 work is seasonal so you work part of the year and make more then a whole years regular work Cattle sales Chisholm trail 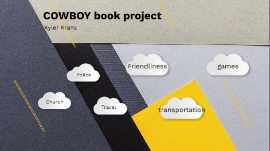 Transcript: Kyler Kranz COWBOY book project Church Church "we always had to go to Sunday school" pg 3 In this passage it informs the reader that they go to church every Sunday. I also go to church but not as much as they probably do. Police Police "As we rode out of town we both looked back to see if the sheriff was comin to" pg 13 This passage informs the reader that they had law enforcement just like we have today Travel Travel "if you're dead-set on goin west I'll get you an outfit an let you go" pg 18 This passage is about his dad letting him go west. I don't think my parents would trust me to travel anywhere outside of the state alone. Friendliness Friendliness "come on in and eat" pg 31 Throughout the book complete strangers will invite the main character in to eat food. I can't imagine going onto someones property and getting a meal. "and when we pulled off the wagon-sheet" pg 100 Transportation transportation They used wagons to hall stuff around, yet nowadays we use cars and trucks to move things. "Rusty and me played pool awhile" pg 134 Games games That's cool that they used to play pool too. that's for sure one thing I do nowadays that they used to do. 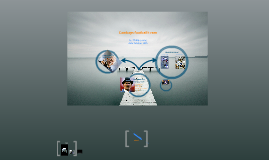 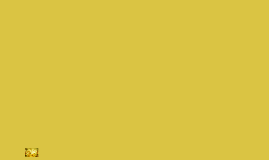 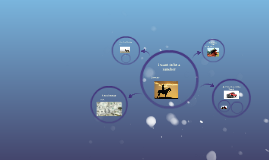 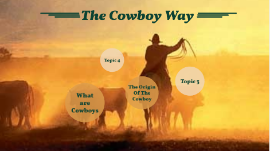 Transcript: The Cowboy Way What are Cowboys Cowboys played an important role in westward expansion of the United States and providing cattle across the country. Throughout history Hollywood has glamorized the life of a cowboy but the lonely, demanding, and sometimes grueling work was often overlooked by the following generations. What Are Cowboys? Nearly all movies that feature a cowboy consist of a heroic cowboy who displays the typical masculine ideal. They would destroy evil forces, conquer their enemy, show tireless strength, and always find love. Hollywood's cowboy would fulfill the dream of every American boy. Hollywood's Cowboy Hollywood's Cowboy The real-life cowboy is doing work nonstop. A cowboy worked 10 to 14 hours each day on the ranch and 14 or more on the trail. The average cowboy in the west made $25 to $40 a month and were mostly young men who needed cash. 1800's Cowboy 1800's Cowboy The Origin With the herds of buffalo disappearing and Natives being forced to reservations, horses and cattle flourished on the plains. The origin of the American cowboy actually came from Spanish ranchers of Mexico. The Origin Of The Cowboy A sturdy, short tempered breed from the dry grasslands of southern Spain. Cattle was not indigenous to North America and were brought by gold seeking Spanish Conquistadors when they landed in the Caribbean islands during the late 1400s. This species crucial in transportation and food to support a growing America. The Texas Longhorn Longhorn The American Cowboy was heavily influenced by the Mexican Vaqueros. The Americans learned from the Spanish to round up, rope, brand and care for the animals. They learned many more things for their Mexican neighbors including speech, eating jerky, use of spurs, and much more. The Mexican Vaquero Vaquero Topic 3 Impact The Cowboys played an important role in westward expansion for the United states. They also were the main way to move cattle across the country. They did this as the industry boomed and demand for cattle increased exponentially. The constant movement and grazing of the plains however Topic 4 Topic 4 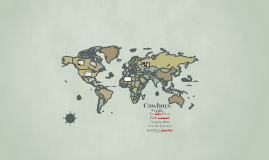 Transcript: Cowboys Gregory and Patrick : 5 themes of Geography Kelly: Hardships and Conflicts The profit from cattle was booming. The cattle were becoming less and less so there were not enough of them to sell. Jolie: A Few More Facts by: Jolie Butts Kelly Schattle Gregory Rose Patrick Jackson Caroline Rossiter To fit in and to be less discriminated against many of the different races and cultures would become cowboys. They also traded ideas of how to grow crops. Native Americans and Cowboys Caroline: Maps ~The cowboys had a long and torturous journey on their way from Texas to Kansas to get to the rail roads. ~They also had to cross through the Indian territory and that wasn't an easy task. The Indians were very territorial. ~They had good hiding places and good weaponry. ~These trails were very important to the cowboys. ~ They were their way of getting to the railroads efficiently and safely. ***Fun Fact*** The Chisholm trail was 220 miles long! -Long cattle drives -Long hours -Had to protect cattle -Looking out for rustlers and other wild animals -Lonely -Stampedes -Very tough job The Cattle Kingdom Ends