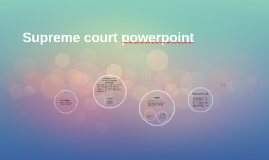 Transcript: The cases were combined because they all sought desegregation of schools as the remedy of grossly inadequate conditions in segregated black schools Amber Fiedler Brown v. Board of Education of Topeka, 347 U.S. 483 (1954), was a landmark United States Supreme Court case in which the Court declared state laws establishing separate public schools for black and white students to be unconstitutional. impact the U.S The vote on Brown v. Board of Education was unanimous, meaning that all nine justices voted the same way. The ruling in the case was written by Earl Warren, who was Chief Justice. ﻿ The Court bears much of the blame for this. The justices of the mid-1950s came of age at a time when judges routinely struck down federal child labor laws and other progressive legislation, citing dubious theories of the Constitution. Judges Brown v. board of education 1954 Holding major argument Background on brown v board of education Chief Justice Warren delivered the court's opinion, stating that "segregated schools are not equal and cannot be made equal, and hence they are deprived of the equal protection of the laws." This ruling in favor of integration was one of the most significant strides America has taken in favor of civil liberties. Dissenting Harry Briggs was one of twenty plaintiffs who were charging that R.W. Elliott, as president of the Clarendon County School Board, violated their right to equal protection under the fourteenth amendment by upholding the county's segregated education law argument Supreme court powerpoint I think the brown v board of education is the most important case in the u.s because it helped people realize that even if the kids are not white or not black they can still go to school together. Pictures brown v board of education 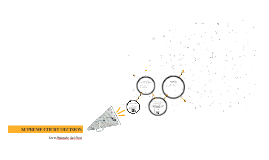 Transcript: SUPREME COURT DECISION GRANTED: May 20, 2013 ARGUED: Nov 6, 2013 DECIDED: May 5, 2013 "The town of Greece does not violate the First Amendment by opening its meetings with prayer that comports with our tradition and does not coerce participation by non adherents." What the case was about. https://www.oyez.org/cases/2013/13-132 https://en.wikipedia.org/wiki/Town_of_Greece_v._Galloway The year the decision was made. Sara Peirotén del Pino Resources The implications of the decision. Impact and effect of the citizens The citizens that lived on the Town of Greece could pray before each legislative decision. The town of Greece is a EEUU Supreme Court in which the court decided that the Town of Greece could pray for open each legislative decision. 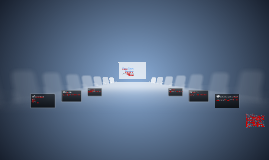 Transcript: Taco Villa We chose these restaurants because they were overall diverse and made enough money to stay afloat. Also, they had affordable prices for all of our students. We decided to think more economically with our decisions as opposed to pleasing outside members of the community because when it comes down to it, the students are the ones that are going to have to eat at these restaurants every day. For the students that do not like these options, they join the student council and they can make the decisions, or bring your lunch. All together daily these restaurants will make an estimated $599 a day. Hunan Wok can sell 250 plates of chicken and chow mein at $1.50. This will make about $245 a day in profit. Consumer Science Kitchen Consumer Science Kitchen can sell 25 plates at $1.00. Due to no daily costs, they can make full profit of 25 dollars every day. Taco Villa can sell 150 tacos at $1.50 per taco. This will make an estimated profit of $135 dollars a day by: Caroline, Hannah, Selena, Dylan, Kayla Why we chose these.. Hunan Wok Food Court Decision Bennie's can sell 100 hamburgers at $2.50 each. This will make about $100 in profit every day. Pasta Place Pasta Place can sell 80 plates of pasta at $2.50 each. This will make about $94 a day in profit. Bennie's Our Decision Taco Villa Hunan Wok Bennie's Pasta Place Consumer Science Kitchen 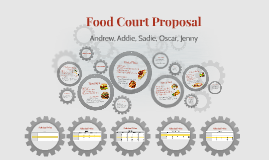 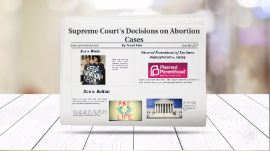 Transcript: www.supremecourt.com June 9th 2017 By: Priyali Patel Supreme Court's Decisions on Abortion Cases Date: Argued: December 13, 1971 Decided: January 22, 1973 Background: In the early 1970s multiple states banned or restricted women from getting abortion. Norma McCorvey commonly known as "Jane Roe" to secure her identity at the time of this case seeked to get an abortion. She wasn't able to get abortion because Henry Wade, at the time District Attorney of Dallas County enforced a law that prohibited women to receive abortion unless it was to save the life of the mother. At this time in history, pro-life advocates believed that abortion can harm pregnant women. Date/Background Roe v. Wade Insert your own text here. Talk about something related to your first topic or just put some placeholder text here. Circumstances/Controversy Should women be allowed to receive abortion, or should they not be allowed to make a big decision for themselves, if they wished to not have the baby? Prior to Roe v. Wade women weren't either allowed to have abortion unless it was to save mothers life. A majority of laws didn't allow the women to make this choice, and after feminist movements challegned womens's right to make such decisions. Circumstances/Controversy At the end of the hearing, the Supreme court decided with a 7-2 decision, which allowed the women legal right to have an abortion because it violated women's constitutional right to privacy. This was heavily debated under the Fourteenth amendment, to protect an individual's privacy. Court's Decision Court's Decision Personal Judgement I think the pregnant woman has full rights over to decide weather or not she chooses to have the baby. This is because the woman suffers through a lot during pregnancy and she should be given complete control over the decision if she would want to suffer the pain. Therefore I agree with Supreme Court's decsion, which states that it is woman's constitutional right to privacy. The court's decision did split the nation in half but gave woman control to their body, and a chance for them to have an abortion if wished. Personal Judgement After the Supreme Court invalidated the Texas law by a 7-2 vote, opposition emerged. The Roman Catholic Church criticized abortion as a form of infanticide. Many fundamentalist Protestant minsters joined the outcry. The National Right to Life Committee formed with the good of reversing Roe v. Wade. Social Impact Social Impact Date Argued: April 22, 1992 Decided: June 29, 1992 Background A Pennsylvania legislature amended its abortion control law in 1988 and 1989. Among the new provisions, the law required informed consent and a 24 hour waiting period prior to the procedure. A minor seeking an abortion required the consent of one parent (the law allows for a judicial bypass procedure). A married woman seeking an abortion had to indicate that she notified her husband of her intention to abort. These provisions were challenged by several abortion clinics and physicians. A federal appeals court upheld all the provisions except for the husband notification requirement. Background Planned Parenthood of Southern Pennsylvania v. Casey Insert your own text here. Talk about something related to your second topic or just put some placeholder text here. Circumstances/Controversy Can a state require women who want an abortion to obtain informed consent, wait 24 hours, and if minors, obtain parental consent, without violating their right to abortions as guaranteed by Roe v. Wade? Many states such as Pennsylvania openly defied Roe by passing new laws that prohibited abortions, which triggered Planned Parenthood and caused an upheaval. The restrictions prevented Planned Parenthood from helping women get an abortion. The requirements the state posed were far to difficult to pass and appeared unnecessary. Circumstances/Controversy In 1992, Supreme Court released a decision ruling that said Roe v. Wade was affirmed but part of Pennsylvania law was also constitutional. Based off of Roe v. Wade, court ruled that a woman’s decision to get an abortion implicates “liberty interests” and “privacy interests” that the Constitution's Due Process Clause protects. Court also ruled that state could not ban abortions before the “viability” point and that states can not ban abortions that help save a life of the mother. Finally the court also proclaimed that any regulation that imposes an obstacle for a woman from obtaining a legal abortion, is an “undue burden” that violates the woman’s constitutional right to an abortion. The decision was a 5-4 majority Court's Decision Court's Decision I think that it is the woman's right more than the man's becuase it is the woman that has to go through the pregnancy and they should have the right to decide what they want to do with their body. Requiring a consent from husband puts a limit on the woman's right, especially since some women might be scared of their spouses. Therefore I agree with the Supreme Court's 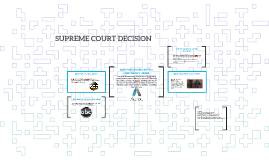 Transcript: WHAT THE CASE WAS ABOUT SUPREME COURT DECISION The decision was granted the 10th of June in 2014 by the Supreme Court of the United States. American Broadcasting Companies v. Aereo was a United Supreme Court decision. The Court ruled that the service provided by Aereo, allowing subscribers to view live and time-shifted streams of over-the-air television on Internet-connected devices,[1] violated copyright laws. During the activities of the company of Aereo (when the company was still active), lots of TV shows lost many audience. Most people consider that the decision of the Supreme Court was right, but other people were unhappy. IMPACT AND EFFECT ON CITIZENS THE IMPLICATIONS OF THE DECISION Aereo did not obey the copyright laws. With this decision the rights for instance of actors, singers and celebrities, who were involved in this discus, where protected by the Supreme Court. THE YEAR THE DECISION WAS MADE Sources: https://en.wikipedia.org/wiki/American_Broadcasting_Cos._v._Aereo,_Inc. https://www.oyez.org/cases/2013/13-461 http://www.scotusblog.com/case-files/cases/american-broadcasting-companies-inc-v-aereo-inc/ AMERICAN BROADCASTING COMPANIES V. AEREO Aereo did not obey the copiright laws, so ABC presented against it. ABC thought that the service from Aeeo was not good. 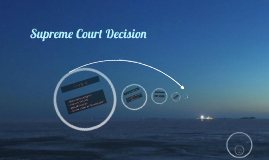 Transcript: Discussing Freedom of Religion Deciding Education and Prayer Most schools can not moment of silence Education 5000 cases each year chooses 150-200 gets all records narrow down to "Discuss List" Process Supreme Court Decision Opinion We should all have moments of silence The government should stay out of it Freedoms Prayer Moment of silence Whats Happening Decision Matthew Palmer John Norris Morgan Clary Bo Emory 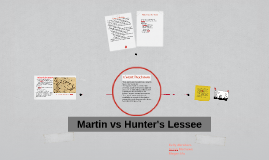