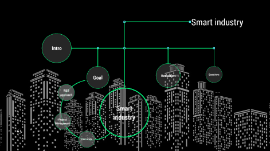 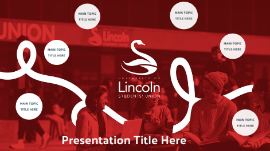 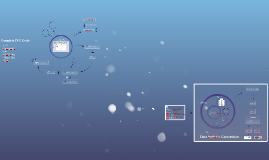 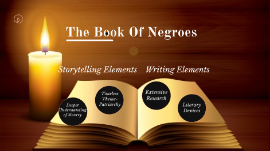 Transcript: The Book Of Negroes Storytelling Elements Writing Elements Written By: Lawrence Hill Presentation By: Zeineb Muhsen The Book of Negroes Title The Book of Negroes is a page turning historical fiction novel told in the first person perspective of a fictional character named Aminata Diallo. This novel is a great work of literature that outlines the life of a girl living in the 1700s as she goes from being a free African child, to an abducted slave and finally to a woman. The remarkable storytelling and writing elements immerse the reader into the life of Aminata. Thus, the reader not only learns about a dark portion of history but is able to empathize with the experiences of slaves on a human level. A Great Work of Literature 1745- The story starts off with Aminata's abduction from her village in west Africa by slave traders at the tender age of 11 years old. She details how she was forced to walk in a coffle- a string of slaves- for months to the ocean. On this treacherous journey, she meets Chekura, a young boy that soon becomes her close friend. As Aminata describes her horrific experience on a slave vessel, the audience is able to witness the lack of humanity of the slave trade. Early Life Plot Summary Aminata survives the crossing of the ocean and lands in America. She is taken to South Carolina where she is forced to work on an indigo plantation. On the plantation, she is subject to physical and sexual abuse at the hands of her slave owner, Mr. Appleby. Despite her lack of physical freedom, Aminata possesses a very intellectual mind and is able to learn to read and write in secret. This skill becomes her saving grace as she is sold to a Jewish man named Solomon Lindo for her literacy skills. Although still a slave, she is treated with more humanity in Lindo's home. Life as a Slave Life as a Slave When Mr. Lindo travels to New York, he takes Aminata with him. At this point, it is the 1770s and the American revolution is intensifying, so she is able to escape during the conflict. Due to her literacy, she is able to get work with the British army writing the names of Black British loyalists who are allowed to set sail from New York to other British colonies. The document she writes in is called ‘The Book of Negroes’. Aminata is then able to travel to the British colony of Nova Scotia where she is promised a life of freedom. Escape From Slavery Escape From Slavery In Nova Scotia, the black loyalists are not given the rights that had been promised to them by the British. When the chance comes to travel back to Africa and settle in a place called Sierra Leone, Aminata takes another voyage across the ocean, this time by her own will. Journey Back Home Journey Back Home Oftentimes, people remember the slave trade as a political and economic event rather than an event that devastated the lives of millions of people. The number of black people forced into slavery in Western countries is seen as a mere statistic, lacking any human connection. This novel is able to ground these statistics into reality by seamlessly incorporating the historic suffering into Aminata's emotional story. The experiences of Aminata are vividly described and strike empathy in the reader. Establishes Deeper Understanding of the Impact of Slavery Deeper Understanding of Slavery Quote 1 The author sheds light on the experience of kidnapped Africans aboard slave ships: “Everywhere I turned, men were lying naked, chained to each other and their sleeping boards, groaning and crying. Waste and blood streamed along the floorboards, covering my toes.” (Hill 63) In this quote, Aminata describes her experience as she enters the hold of the slave ship. The author uses the perspective of the main character to reveal the sickening conditions that slaves endured on their journey across the ocean. Aminata comes to the conclusion that living as a slave makes you "invisible" and you have "no claim on your future". This truth hits home to any reader that has felt helpless in their lives and fosters an understanding for people forced into slavery. "Near the platform stood a group of Africans, some barely able to stand and others with pus dripping from sores on their legs…I could do nothing to change their prospects or even my own. That, I decided, was what it meant to be a slave: your past didn't matter; in the present you were invisible, and you had no claim on your future” (Hill 189) Quote 2 In this quotation, the author identifies the helpless feeling that a slave is forced to have: Patriarchy Timeless Theme- Patriarchy The patriarchal world is evident throughout the novel and establishes a timeless theme. Hill expertly portrays the challenges that Aminata faces due to being a slave but also her disadvantages due to being a female. Female slaves were not only abused physically, but also sexually, mentally and emotionally. Their bodies were not their own and were abused by the men in power. Although Hill is a male, he is able to connect to the feelings that 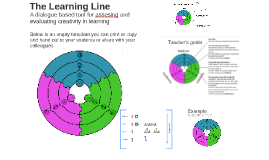 Transcript: Learning target: - you must be able to communicate in writing and saying combined with digital media - you must be able to explain what death means in the Christian religion Who will help you: - me (teacher) - your class mates (feedback groups) - the church (Eva and Pia) Who do you know who can help us? - ?? (students: maybe the verger can help us!) - ?? (students: or perhaps the burial cooporation?) The Learning Line Teacher's guide Example Learning target: - you must know how to cooperate with people outside the school - you need to be able to present your ideas and project in front of someone you do not know Students ideas: - a virtual tomb - tombs with qr-codes and silent music - tombs for pets Signs on learning from students: - it can be hard to get ideas on command - YES! It is fun to work with our own ideas We will work with: - how to get ideas which can benefit others - how to be creative with the body Which other things can we use to be creative or to get good ideas from? - ?? (students: we can use LEGO) - ?? (students: we can go for a walk or do a play!) Signs on learning from students: - we will use Animot and poems - we will use theater to tell about life and death in a positive way - we have learned to use Google SketchUp to visualize our tomb Below is an empty template you can print or copy and hand out to your students or share with your colleagues Groups The perfect burial We will work with: - different ways to communicate; body and voice - life and death - different medias (modalities) Which other communication tools have we previous used? - ?? (students: we can use what we learned when we made our own fairytales) - ?? (students: we can use blogs and wikis or make our own film as we did in the science project earlier this year) Learning target: - you must be able to explain what a brainstorm is - you must be able to write or draw your ideas Signs of learning: - it is funny, but also hard to work in groups - we need to help each other - you need to be brave and prepared when you need to talk to someone you do not know - an example the man from the burial company Class A dialogue based tool for assesing and evaluating creativity in learning Used with 4th and 5th graders in a project about burials using danish and religion as curriculum . Progression Individual Planning