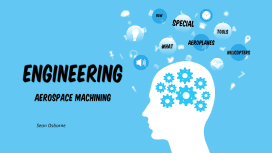 Transcript: HOW aeroplanes helicopters Engineering aerospace machining Sean Osborne requirements Each customer has different requirements on how the part looks, tolerances and packaging What is my job? WHAT My job is to make parts for aeroplanes and helicopters using a lathe or mill. difference between each machine lathe and mill A lathe is a rotating spindle that clamps onto material with the attached chuck and the tool moves to the material. (3 axis) A mill is a rotating spindle that is attached to the tool and the spindle goes towards the table but only in one axis, while the table moves for the rest. (up to 5 axis generally) turn/mill special This is a machine that can do both turning and milling on a lathe style machine Tooling tools We make our own tooling like fixtures, jaws and clamps. location they are all stored on racks and correspond with a spreadsheet. materials I use anything from standard aluminum and steel to beryllium copper. 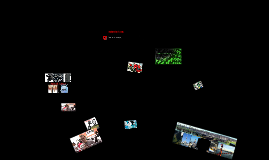 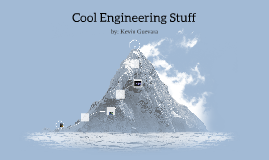 Transcript: by: Kevin Guevara Thank you! Fluent body can squeeze through small holes Footage PoseIdrone Cool Engineering Stuff A newly created and original take on sea exploration Allows cave exploring to be made easier Brand new drone made to help explore the seas 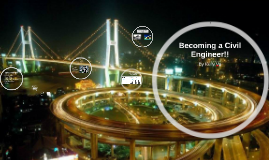 Transcript: Becoming a Civil Engineer!! -Bridges -Roads -Waterlines By Kelly Vu The World Needs Engineers Doesn't go out of Style Infrastructure is a MUST! Let children explore the possibility of engineering as their future!! Building the Future The work of an engineer is always progressing! -For future progression -For bettering our transportation system -Because we're awesome -Steady job -Good Pay -Knowing that you're contributing to society What YOU get 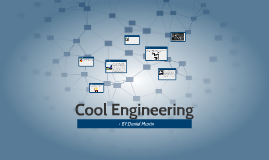 Transcript: My product Some challenges they are facing is "how many of those trains are they going to make"? Alstom BY:Daniel Martin Alstom is the largest french manufacturing company which holds interests in the power generation and transport markets. They are the ones who are going to make that train fantasy come true. They are making the trains shapes better and now they are using magnets to make the train flowt onto of the rails and so it could be esier to controll.The trains will be going as fast as 200 mph. Continuing Conclusion They do not know how many to make, so they decided to make as many as possible. About me My product is about "New trains".Trains have been around sence 1813 invented by George Stephenson.George stephenson died in August 12, 1848. Sence he died trains have been improving not just by there size but also by there speed. A "magnetic Train" Hi my name is Daniel martin,I am 15 years old and today i would like to show you my project. Challenges A "Train" solution Cool Engineering Trains are a faster way of traveling.Alstom is working on faster trains.Some people would say "that's crazy", there's no way a train could go faster than what it already goes.But Im here to show you,"that they are wrong". 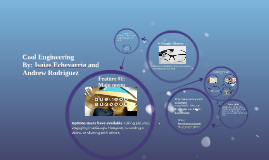 Transcript: Google glass even allows the user to naturally take photos. Options users have available: taking pictures, engaging in a Google Hangout, recording a video, or sharing with others. Google Glasses Wearable computer: Games: Release date Developers (US): February 2013 Consumers (US): Currently Photos: Google glasses is also considered to be a portable computer.Wearers communicate with the Internet via natural language voice commands through a mini mounted mic. http://www.hongkiat.com/blog/google-glass/ Google Glass is a type of wearable technology with an optical head-mounted display also known as (OHMD). Photos A number of "mini games" have been developed to showcase how the specs are a future gaming platform with unique properties all their own. Google glasses also reminds you of an upcoming appointment or other meeting that you have planned. Cool Engineering By: Isaias Echevarria and Andrew Rodriguez Reminders: What is it? Price ($$$) Feature #1: Main menu Features #2, #3 and #4: http://www.pcmag.com/slideshow/story/308711/16-cool-things-you-can-do-with-google-glass Reminders Google Glass: The price that Google charges developers and testers is $1,500. ( Only a prototype is available for others to test. ) 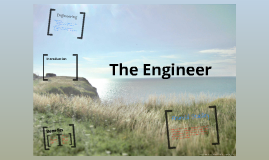 Transcript: Photo based on: 'horizon' by pierreyves @ flickr Financial Stability Introduction High-Paying jobs / Salary. Versatile Environments. Constant intellectual development via Creative Thinking. What is Engineering? The branch of science and technology concerned with the design, building, and use of engines, machines, and structures. Engineering has a very large range of sub-classes differentiating from as far as aerospace engineering down to construction. The Engineer Benefits Extremely large career field. Constantly employing. Consistent work hours. Beneficial to Society. Technological & Scientific discovery. Engineering Engineering careers are constantly looking for more workers, and most companies have high paying jobs along with insurance plans. This gives Engineers a feeling of Financial stability and security. Why do you think many engineers are so happy? They love their work and their stable finances!