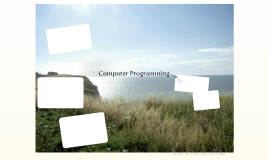 Transcript: Must have a bachelor's degree in computer science, mathematics or information systems. Some jobs even call for a master's degree. Photo credits: 'horizon' by pierreyves @ flickr At least four years of college. By the year 2018. Computer programming and computer engineering is known to increase by 21% from 2008 to 2018, much faster than the average for all occupations An Example: History Computer software engineers are among the occupations projected to grow the fastest and add the most new jobs over the 2008-18 decade. Job prospects As a result of rapid employment growth over the 2008 to 2018 decade, job prospects for computer software engineers should be excellent. 1936 Konrad Zuse - Z1 Computer First freely programmable computer. Here is something small... As a computer programmer you may need to go back to school for knowledge of what your programming. - For an example if you are programming medical stuff you might need to go and study medical terms and names to make your job easier. To be a computer engineer or programmer you have to at least a bachelor's degree and have some knowledge of computer systems and technologies. 1985 Microsoft Windows Microsoft begins the friendly war with Apple. 1951 John Presper Eckert & John W. Mauchly UNIVAC Computer First commercial computer & able to pick presidential winners. 30 Computer Programming First Education The Basics Second In the Future 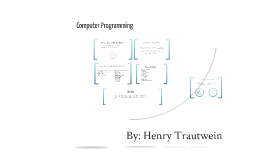 Transcript: Money and Outlook Statistics on employment by gender The percentage of men vs women 59% Men and 41% Women An Experienced worker would make: $84,760 Annually $40.75 Hourly An Average worker would make: $71,053 Annually $34.16 Hourly An Entry worker would make: $43,618 Annually $20.97 Hourly The outlook is decreasing Annual growth rate is estimated to be -3% Educational Requirements A computer programmer would work in an office or some other place in front of a computer. Computer Programming Computer Programming Qualities of Computer Programming Prerequisites A person of this career converts project specifications and statements of problems and procedures to detailed logical flow charts for coding into computer language. Develops and writes computer programs to store, locate and retrieve specific documents, data and information. - https://secure.flchoices.org/Career_Planning/Career_Profile/Career_Profile.aspx?id=TxKIzV2O7Iq32rrTFXAP2BPAXmJgwXAP3DPAXXAP3DPAX&screen=1 - What type of place does a Computer Programmer work Computer Programming/Programmer, General Computer Programming, Specific Applications Computer Programming, Other Computer Science Computer Graphics Computer Software Technology/Technician Management Information Systems, General Colleges Offering my Program There are over 280 colleges offering this program Some of them include: Stratford University San Jose State University University of Southern California North Carolina State University Rochester Institute of Technology Skills you need to know but not as important are: Coordination Equipment selection Installation Judgment and decision making Quality control analysis Systems evaluation Technology design Time management Troubleshooting By: Henry Trautwein For Computer programmer you would need a Bachelor's Degree A Bachelors Degree is 4 years in college Skills you need to know very well are: Complex problem solving Programming Operation analysis Citations 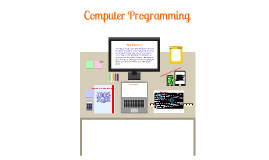 Transcript: Computer Programming You may already have used software, perhaps for word processing or spreadsheets, to solve problems. Perhaps now you are curious to learn how programmers write software. A program is a set of step-by-step instructions that directs the computer to do the tasks you want it to do and produce the results you want. In general, the programmer's job is to convert problem solutions into instructions for the computer. That is, the programmer prepares the instructions of a computer program and runs those instructions on the computer, tests the program to see if it is working properly, and makes corrections to the program. The programmer also writes a report on the program. These activities are all done for the purpose of helping a user fill a need, such as paying employees, billing customers, or admitting students to college. The programming activities just described could be done, perhaps, as solo activities, but a programmer typically interacts with a variety of people. For example, if a program is part of a system of several programs, the programmer coordinates with other programmers to make sure that the programs fit together well. If you were a programmer, you might also have coordination meetings with users, managers, systems analysts, and with peers who evaluate your work-just as you evaluate theirs. I will pursue this interest in the future 2011 I need, of course, some credentials, most often a two- or four-year degree in computer information systems or computer science. I could learn some fundamental knowledge from books or asking for help from college professor. And try to practice to make some stuff like an easy website. Much learning would be not bad, they will improve my skill of computer. 2010 2009 What We Learned Why I choose it? 2013 Right now, there are lots of computers in the world, so computer engineers will be a famous job, and there are some types of the computer programming, Such as Web designer, software engineer software designer, internet administrator, and even the hacker. So I think choosing to be a computer engineer could be a great idea for the future. Timeline What can we do after study this? 2012 0 + - = 9 8 7 1 2 3 4 5 6 c 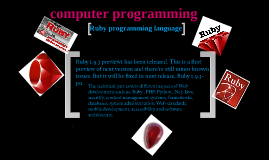 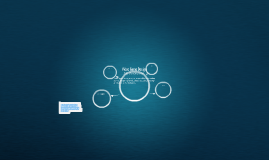 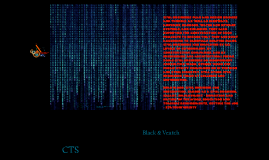 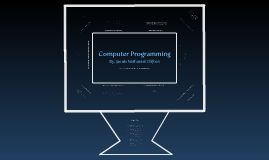 Transcript: Computer Programming My Career Clusters 1. Information Technology 2. Science, Technology, Engineering, and Mathematics. 3. Health Science What does a Computer Programmer do? Computer Programmers develop and write computer programs to act as storage, to help locate something, and to retrieve information by turning data into a form of coded computer language. They also run tests and diagnostics to see if a program is working properly. Programmers may consult with management, engineering, or technical staff to determine certain programs' intent, problems, and suggestions to enhance the program or solve a problem. A Computer Programmer's Salary Scale Nationally, the salary scale is as follows: "Average Annual Wage $72,010" "Average Hourly Wage $34.62" "Average Annual Range $51,450 to $87,950" Possible classes needed for my career offered at RCC Classes that may help me on my way include: CIS 110 02/03/04/50 Introduction to Computers. Classes I've already taken that will help me become a Computer Programmer I've already taken CIS 110 Introduction to Computers, which will possibly aid a future Computer Programmer on his/her way. Some universities that offer my career path/undergraduate degree. 1. Lees-McRae College 2. East Carolina University 3. North Carolina A&T State University 4. Guilford College 5. North Carolina Central University My first choice of which would be... I choose ECU. It has a Computer Science program, but does not detail as to which classes are involved. Some related careers include: 1. Computer Systems Analyst 2. Database Administrator 3. Computer and Information Systems Manager Computer Programming's Growth Outlook The Growth outlook for this career at this time, is unfortunately 0%. The benefits of attending RECHS that relate to this college and career: The benefits of going to RECHS for this college and career include: saving money, the computer classes I can take, and an Associate's Degree. Works Cited "CFNC.org - Career Cluster Survey." CFNC.org. The College Foundation, 19 May 2011. Web. 19 May 2011. <https://www1.cfnc.org/Plan/For_A_Career/Learn_About_Yourself/Career_Cluster_Survey/Career_Cluster_Survey.aspx>. "CFNC.org - Career Profile - Computer Programmer." CFNC.org. The College Foundation. Web. 19 May 2011. <https://www1.cfnc.org/Plan/For_A_Career/Career_Profile/Career_Profile.aspx?id=TxKIzV2O7Iq32rrTFXAP2BPAXmJgwXAP3DPAXXAP3DPAX&screen=1>. "CFNC.org - Career Profile - Computer Programmer." CFNC.org. The College Foundation. Web. 19 May 2011. <https://www1.cfnc.org/Plan/For_A_Career/Career_Profile/Career_Profile.aspx?id=TxKIzV2O7Iq32rrTFXAP2BPAXmJgwXAP3DPAXXAP3DPAX&screen=5>. "CFNC.org - Program Keyword Search." CFNC.org. The College Foundation. Web. 19 May 2011. <https://www1.cfnc.org/Plan/For_College/Explore_Programs_and_Majors/Program_Keyword_Search/Program_Keyword_Search.aspx?id=JsnfXAP2BPAXmzTgklDOh5rdOf9VwXAP3DPAXXAP3DPAX>. "CFNC.org - Program Keyword Search." CFNC.org. The College Foundation. Web. 19 May 2011. <https://www1.cfnc.org/Plan/For_College/Explore_Programs_and_Majors/Program_Keyword_Search/Program_Keyword_Search.aspx?id=4ODUvcVoI6QPDm2Fr3xmfAXAP3DPAXXAP3DPAX>. Whom you may call "The Lord of Darkness." *Insert maniacal laughter here* "Courses." Blackboard Academic Suite. Web. 20 May 2011. <http://rockinghamcc.blackboard.com>. By: Jacob Nathaniel Clifton 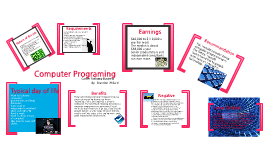 Transcript: Computer Programing Brandon Willard Analyze tasks that programs are needed to perform Plan a framework for a program that can perform the required tasks Write out line-by-line instructions in a programming language Document their work Test software to ensure that it is working. Requirements Negative Earnings $40,000 to $110,000 a year for most The median is about $68,000 a year Senior programmers and independent consultants can earn more. Employment of computer programmers is expected to increase 12 percent from 2010 to 2020, about as fast as the average for all occupations. Since computer programming can be done from anywhere in the world, companies often hire programmers in countries that have lower wages. •Tiredness. The main disadvantage of this profession is high level of tiredness. Sitting before the computer every day is very hazardous for the eyes and may result in different eye problems that are very difficult to cure. •Responsibility. It goes without saying that computers and other equipment is very expensive and programmers are responsible for it. Moreover, the least mistake can lead to a huge problem and spoiling of expensive materials and equipment. •Stress. This con is common for practically every profession. In this case, stress can be the result of the excessive tiredness and tonicity. Moreover, the working environment and surrounding can be negative. Many employers require a Bachelor’s Degree. Some companies may accept an associate degree or diploma. Certification is available for different programming languages. Level of Education: High School 2-year College/Technical Training 4-year College/University Work for software companies, governments, and large businesses Some work as independent consultants Most work 40 to 50 hours a week Work in offices in front of computers May travel to meet with clients. Benefits Recommendation Career Outlook Typical day of life Nature of the job Those who choose computer programming as a career are preparing themselves for an interesting, viable, and potentially lucrative profession. The benefits of choosing to become a computer programmer are numerous, five of which are described here: high pay, a positive job growth outlook, a wide range of career options, creative and intellectually challenging work, and good prospects for advancement. By: Yes, I would consider doing computer programming in the future. I would recommend this to people who have an interest in technology. Career Pathway Business